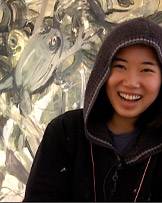 A video documenting Jaewon Choi's visual arts senior thesis exhibition, "Frogs + Forms," follows her as she creates a monumental centerpiece for her show. Choi, above, also is working on a physics thesis about light from the beginning of the universe.

A video documenting Choi's first solo art exhibition, "Frogs + Forms," follows her process in creating a monumental 16-foot-wide by 8-foot-high painting. The central work in her show, which features a maelstrom of leaping frogs and a pair of charged and yet weary human figures, is ambitious in scope and scale. The painting was built in sections and designed for a large new wall constructed in the recent renovation of the Lucas Gallery at 185 Nassau St. Choi also displayed 14 other paintings of enlarged frogs or other creatures, and nudes and groups of people.

Jaewon's primary thesis adviser, Eve Aschheim said, "Jaewon is basically an expressionist in her approach to painting, but this show evidences styles as divergent as those of both Jean-Auguste-Dominique Ingres and his rival in the French academy, Eugène Delacroix. While Ingres used a bounded line to contain form, Delacroix used broken lines to convey movement, gestural impact and the permutability of form."

"Jaewon's use of style really evolved from her relationship to her subject," said Aschheim, a senior lecturer in visual arts in the Lewis Center for the Arts. "She found that the figure alone was a self-contained form, while the figure in relation to other figures became an energetic, volatile, shifting form. I think that this range is terrific because it gives her the option in the future of exploring a wide amount of territory."

Rather than analyze the meaning of the characters that inhabit her paintings, Choi said she prefers to focus on the process of working within such a large frame that she has to stand far away to see all of it. She said she also enjoys playing with incongruences such as small creatures appearing huge and bloated, and delicateness coexisting with repulsiveness.

"I'm constantly back and forth from sort of freaking out and feeling really excited about it," Choi said as she was preparing for her show. "At the same time, I am trying to remind myself how happy I am to be able to paint."

Choi spent the last three weeks before her show completing the major focal painting, which culminates her exhibition by bringing together the two themes of the show, frogs and nudes, into animated conversation. During that time, Choi put finishing touches on her other large paintings of frogs and nudes. In many of these sensitive and provocative works, Aschheim said, the forms have a strangeness — they are so volumetric and oversized that they appear to press up against the edges of their canvases.

Choi's show opened Feb. 23 in the Lucas Gallery. It closed Feb. 28, immediately following a formal critique by a panel of professors and students, to make way for the next senior thesis exhibition.

Choi, of Changwon, Korea, is writing a program to help make sense of data retrieved by the Wilkinson Microwave Anisotropy Probe (WMAP) over the course of nine years. WMAP is a small satellite named after late Princeton professor David Wilkinson that NASA launched June 2001 to make fundamental measurements of cosmology.

Page added that both of Jaewon's theses are about light, calling one of her large nudes "self-luminous." He added, "It's more of a stellar light or a lunar light than the sort of light that we look at. Actually, the light she is studying for her physics thesis we can't even see with our eyes."