Devising a 'silver bullet' for measuring water use by plants

For her senior thesis project, Princeton civil and environmental engineering major Ida Posner is developing a filter that could allow scientists to quickly measure water use by plants like this basil grown in the Princeton EcoHydrology Lab. Measuring plants' water use is critical for understanding how ecosystems are affected by drought, development or climate change.

Most gardeners can tell by rule of thumb how much water their tomatoes and carrots need, but taking an accurate reading of plants' actual water use is a very difficult problem.

Although the measurement is critical for understanding how ecosystems are affected by drought, development or climate change, there is no easy way for scientists to verify estimates of water use. Right now, scientists have to use expensive, bulky laboratory equipment to analyze samples that allow them to directly track how much water plants are using. But if Ida Posner's senior thesis project works the way she hopes, that could all change.

Posner, a civil and environmental engineering major at Princeton University, has developed a technique to simplify and reduce the cost of water vapor measurements. It is not just a theory: For her thesis project, Posner is building a small, cylindrical device that could lead the way for scientists to quickly and efficiently measure plants' water use.

"You put your sample in, and within a few seconds it gives you a reading," she said. Posner is still working on technical details in the hydrology lab in the Engineering Quadrangle and, although she has not obtained final results, she is "pretty confident about it." 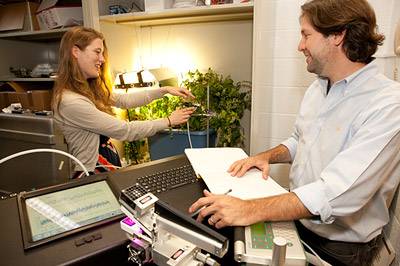 Posner is working with a research team led by Kelly Caylor (right), an assistant professor of civil and environmental engineering and director of the Princeton EcoHydrology Lab, in the effort to find better ways to measure the water use in an ecosystem.

Posner is working with Professor Kelly Caylor's research team, which is looking for better ways to measure the water use in an ecosystem. Making accurate estimates of how much water is used by plants in a given area is a critical element in governing development in semi-arid regions of the world, such as the area of Africa just below the Sahara Desert.

"There is an urgent need for better guidance regarding the management of water for use in dryland agriculture and the response of rangelands to rainfall variability in semi-arid regions," said Caylor, assistant professor of civil and environmental engineering and director of the Princeton EcoHydrology Lab. "Any advice or additional insight to these issues depends critically on being able to routinely and accurately characterize the water use of plants."

Posner, who is from Pittsburgh, is completing a certificate in African studies and spent a semester last year studying at the University of Cape Town in South Africa. She hopes that her research will lead to new work in the area.

"There are so many opportunities for great projects," she said.

To track how plants use water from the environment, the researchers measure isotopes present in water vapor emitted by a plant — a process called transpiration. The proportion of isotopes, which are variants of elements determined by the number of neutrons in an atom, is affected by how the water vapor formed.

"The isotopic signature of water gives it a fingerprint that you can use to trace water through the ecosystem," Posner said. "In the hydrological cycle, you are looking at water being sent back into the atmosphere — is it through evaporation or transpiration?"

Water vapor created by plants through transpiration has a distinct isotope composition, but this measure is often skewed by organic contaminants, including ethanol and methanol, that are emitted by the plants. It's possible to remove or account for these contaminants, but that requires laboratory equipment not suitable for field use. Posner's task is to create a cheap and practical filter to remove these chemicals without disturbing the sample.

In testing her device, Posner first extracts water from a basil plant in Caylor's Princeton laboratory by mashing up a sample and freeze-drying the water. (Another of Caylor's students, senior Alice Suh, is working on a special clamp that can directly collect emitted water vapor. Suh, also a civil and environmental engineering major, is developing the device as part of her senior thesis project as well.)

Posner then must remove the impurities without damaging the sample. To do that, she has made a special filter that operates like a car's catalytic converter. Essentially, she took a 5-inch stainless steel pipe and filled it with aluminum pellets coated with a thin layer of platinum. She attached air hoses at both ends of the pipe so she can stream the water vapor through. If all goes according to plan, the platinum will break down the organic contaminants, which will then remain inside the pipe. The vapor that emerges from the other end will be ready for analysis. In the field, Posner's pipe assembly would be attached to a suitcase-sized device that measures the isotopes.

Caylor said if Posner's technique works "we will be able to quickly and routinely assess the isotopic composition of plant water use in field settings."

"Right now, there are no methods for addressing organic contamination in the field, and laboratory approaches that have been developed are not suitable for field use," he said. "So Ida is really working on a silver bullet — a method of removing contaminants that can be used either in the field or in the lab."

For Posner, the senior thesis has been not only an education in science, but also in the practical aspects of conducting research. She applied for, and was awarded, two grants totaling $1,750 from the engineering school's Adler Fund and Lidow '73 Fund to pay for some of her lab expenses. She had to put together a budget, buy equipment and schedule lab space to conduct her work. Although she said many people from the department, from graduate students to professors, went out of their way to help teach her how to use the equipment or offer advice on everything from supplies to lab techniques, the final responsibility for the project was hers.

"I had not done any independent lab work before," Posner said. "Learning how to do research on your own and make a plan, figuring out how to build something and then building it, is amazing."