Class: "Policy Issues and Analysis of Nonprofits, NGOs and Philanthropy"

Instructor: Stanley Katz, lecturer with rank of professor in public and international affairs, in the Woodrow Wilson School of Public and International Affairs. Katz, who has taught at Princeton since 1978, is also the director of the University's Center for Arts and Cultural Policy Studies. He is an expert on philanthropy and nonprofit institutions, as well as in American legal and constitutional history. Katz, who received the National Humanities Medal in 2011, received his bachelor's degree and Ph.D. from Harvard University. 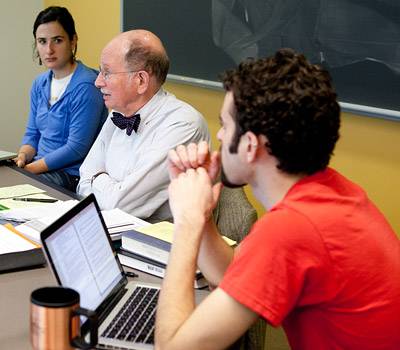 Description: The course provides graduate students with a foundation for understanding nonprofits, nongovernmental organizations (NGOs) and philanthropy, and related policy issues at the local, national and international levels. Among the topics covered in the course are: how the nonprofit world interacts with the private and public sectors; nonprofits and religion; accountability, transparency and advocacy; U.S. nonprofits on the world stage; and nonprofits in the developing world.

"Philanthropy is an integral part of what I want to teach, and my own research has been on the history and function of philanthropic foundations," Katz said.

Katz refers to the system of nonprofit institutions in the United States as the "third sector," working alongside the public (government) and private (business) sectors. Understanding the system is crucial to understanding how modern American society works, he said.

"It's important — and contested — whether social welfare is a state or private responsibility," Katz said. "The private sector is so much larger in the U.S. than in any other country, because in other places the state simply does more. It's a central issue of public policy in the U.S., and it's one of the things the next presidential election is going to be about." 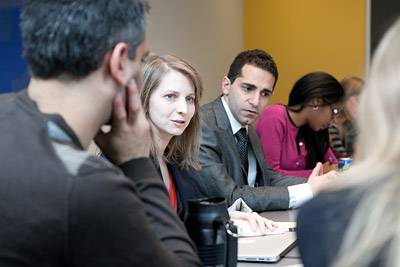 Philanthropy project: This spring, Katz introduced a new element to the course. Due to a $50,000 grant from the private Once Upon a Time Foundation of Fort Worth, Texas, students were tasked with allocating funds to one or multiple nonprofit organizations as an exercise in learning how effective philanthropy and nonprofits work. Seven of the 18 students in Katz's class served on a committee that conducted research and presented options to the rest of the class. They first chose a focus area, youth development and empowerment programs; decided to research local organizations so that they could visit them; and then winnowed the list from 25 organizations to make four major gifts.

The students awarded $15,000 to HomeFront to create a donor base for a preschool program; $12,000 to Anchor House for administrative items such as creating a client database, identifying best practices and using metrics to attract funding; $10,000 to LifeTies to help fund a deficit caused by capital costs; and $10,000 to the Boys & Girls Club of Mercer County to create a barber shop program to train youth in a trade and in running a business. Students also made nominal gifts to several other organizations that helped them with their research but were not selected for an award.

Princeton is one of eight universities offering a philanthropy course with the support of the foundation, and Katz will teach the course again in the fall as a freshman seminar. The freshmen will analyze the impact of the gift made by graduate students in the spring, as well as allocate funds from a second $50,000 grant. 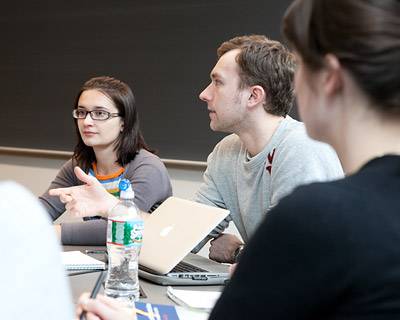 As part of the course, graduate students, including Cristina Gherasimov (left) and Phillip Hannam, discuss how to allocate a $50,000 grant to nonprofit groups. (Photo by Denise Applewhite)

Students say: The students in the class — master's and doctoral students at Princeton, along with students from Rutgers University and Princeton Theological Seminary — made up a diverse group.

Philadelphia emergency room physician Harsh Sule, who is in Princeton's mid-career Master in Public Policy program, signed up for the course because of his interest in public health and his past experience. Sule has been involved with local fundraising, served as country director for International Medical Corps in Azerbaijan and worked with other NGOs such as the National Organization for Wellbody in Sierra Leone.

"The class has improved my understanding of issues surrounding governance and accountability," Sule said. "The class will positively impact the global health aspect of my work most as we seek funding from donors, partner with NGOs and work to implement projects globally."

Cara Stepanczuk, a Princeton student pursuing a Master in Public Affairs, signed up for the course largely to participate in the philanthropy project.

"It was a unique opportunity to explore the challenges large donors face when deciding on projects and the signals they look for when examining different organizations to fund," said Stepanczuk, who served on the grant committee. "I gained enormous respect for the work of local nonprofits, especially social service organizations in Mercer County that provide shelter and quality care to at-risk youth within extremely limited budgets."

The classroom discussions helped guide the giving process, she said.

"One of the key themes in the course was the inherent conflict between unrestricted giving and ensuring accountability," Stepanczuk said. "Through many discussions about how difficult it is to attract funding for basic organizational capacity needs, I learned that a donation without strings attached is one of the most helpful ways to assist an organization with a proven track record."

Prior to taking the class, Master in Public Affairs student Kerry Brennan said she had thought about foundations simply as entities that gave away money.

"I had not thought about the issues of public accountability or transparency in foundations receiving favorable tax treatment for deferred public benefit, nor had I thought about the responsibility for leadership in the area of social policy change that access to such significant resources entails," said Brennan, who plans to have a career in international development. "Taking on the role of grant maker showed the enormous difficulty in selecting programs and projects to fund. … All the members of the class have recognized this throughout the process. It has made us all very reflective and, I think, humbled to have such a responsibility given to us."