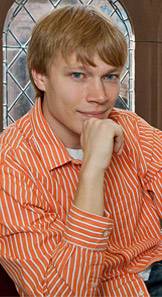 Nathaniel Fleming, the valedictorian of Princeton University's Class of 2012, pursued a concentration in psychology and a certificate in French. He will deliver the valedictory address at the University's Commencement ceremony Tuesday, June 5. Fleming has won numerous awards for his academic achievements and has been active in a variety of extracurricular activities, including working at the Writing Center and singing with the Glee Club and Chamber Choir. 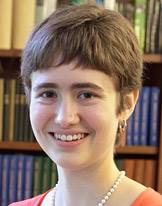 Also speaking at the Commencement ceremony will be Elizabeth Butterworth, a classics major, who is the salutatorian of the Class of 2012. She will continue the tradition of giving a speech in Latin. Read more about Butterworth in a related story.

A single molecule helped define the academic path of Nathaniel Fleming, the valedictorian of Princeton University's Class of 2012.

During the fall of his sophomore year, Fleming was juggling classes in organic chemistry, biology, neuroscience, French and music. The workload was intense, Fleming said, but it began to pay off when the connections between the classes started to emerge. Take a molecule known as PGE2, which affects neurotransmission and pain sensitivity in the brain. It appeared as a topic of his organic chemistry class, then resurfaced in a neuroscience class in a new context.

"I'm studying it from one angle, which is the very pure nitty-gritty chemistry of it, and then in the same semester I see how important this molecule is to the brain in defining our behavior," Fleming said. "I thought it was great because I'm so fascinated by and interested in how people work and how the body functions. And I started to see those connections being drawn."

That focus on the natural sciences — coupled with a consistent curiosity about how different fields interact and overlap — led Fleming to pursue a concentration in psychology, along with completing all of his science prerequisites for medical school. At the same time, he worked toward a certificate in another longheld passion, French. His academic achievements, including a 4.0 grade point average and A+ grades in eight classes, led to him being named valedictorian.

The Eugene, Ore., native will deliver the valedictory address at the University's Commencement ceremony Tuesday, June 5.

Fleming has received many other academic prizes and awards at Princeton. He was awarded the Shapiro Prize for Academic Excellence after his freshman and sophomore years. After his junior year, he received the psychology department's Howard Crosby Warren Junior Prize, as well as the Class of 1939 Princeton Scholar Award for achieving the highest academic standing for all preceding college work at the University. In December, he was inducted into Phi Beta Kappa.

"I've never had this feeling about a student before, that he has so much to give our society that I hope it comes to fruition," said Barry Jacobs, professor of psychology and the Princeton Neuroscience Institute, who was Fleming's adviser for his senior thesis. "I think he has — at least among the students I've met — a somewhat unique possibility or talent to give of himself in a meaningful way."

Fleming has been more than an academic during his time on campus. He also has been a musician, a mentor and the Tuesday night dinner chef for his roommates in Spelman Halls. (Tofu stir-fry with peanut sauce is a specialty.)

Fleming worked for three years at the University's Writing Center, helping other students polish their writing, and he has served as a head fellow during his senior year. He was also an academic peer adviser for Mathey College and study-abroad peer adviser for the Office of International Programs, following his experience studying in France during the spring semester of his junior year. 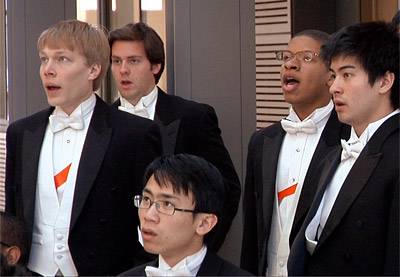 Fleming has been a member of the University's Glee Club for four years, which he said has provided him with valuable opportunities to set aside the rigors of classes and focus on rehearsals and performances. (Video still by Evelyn Tu)

In addition, he has been a part of the Glee Club and the Chamber Choir. Gabriel Crouch, senior lecturer in music and director of choirs at Princeton, said Fleming was committed to music and sharing it with others, rehearsing with the groups 8 1/2 hours a week despite his many other obligations.

Fleming said he came to embrace the opportunity to set aside the stress of classes and focus on music in rehearsals and performances — including during the Glee Club's weeklong tour of France in January.

"There's nothing quite like the experience of performing in a concert, especially in a choir where you really feel a connection with everyone singing in the group," he said.

"Students recognize that Nathaniel is an invested ally, and his approach inspires confidence in their work and enthusiasm about their projects, which is really the most we can ask for," Shaw said.

And as a head fellow, he helped other student tutors prepare for the delicate task of setting other students on the right path with their writing.

"Fellows need to learn how to work with students intellectually and how to respond to their emotional cues," Shaw said. "Nathaniel was always good at this, but he's stunningly good at helping our newer fellows face the challenges of difficult interactions with their students."

Bridging interests in the classroom

Fleming's senior thesis in the psychology department highlighted his interest in reaching across disciplines. The project focused on the neuroscience of religious epiphanies and proposed a theory of how sudden, transformative religious events are experienced by the brain.

"Lots of times, there's this kind of invisible barrier that rises up between religion and spirituality and the scientific approach to that," Fleming said. "A lot of psychology and neuroscience has already focused in various ways on studying religion and spirituality. But it's very difficult to integrate the perspective of people who have these beliefs into your scientific approach."

"It's the perfect thing for a student to do who's up for it, and he certainly is," Jacobs said. "It allowed him to stretch." 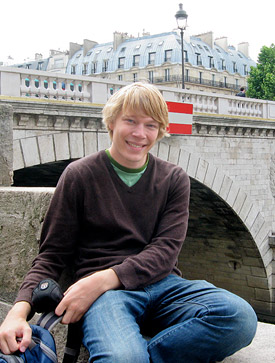 Fleming is seen at Pont Saint-Michel in Paris during the spring semester of his junior year, when he studied in France. (Photo courtesy of Nathaniel Fleming)

In the fall of 2011, Fleming joined three other students for a challenging class in his other major academic focus — French. In the contemporary French prose course, the students tackled 10 thick, complex texts and a significant amount of theory in 12 weeks.

"In all of our class discussions, it was obvious that Nathaniel did not compartmentalize our course, separating it from all other disciplines he was studying," said Christy Wampole, assistant professor of French and Italian. "Instead, he found compelling ways to connect what he'd learned, particularly in his psychology courses, with concepts we addressed in our conversations.

"I find this to be a somewhat rare talent: to create constellations between disciplines, to allow questions to echo between them."

While Fleming has piled up achievements at the University, his time at Princeton began as something of a surprise even to him. Growing up in Oregon, the son of a letter carrier and a dance instructor, he excelled academically, becoming fluent in French through a K-12 language immersion program in his school district. But many of his family ties are in California, and the East Coast didn't seem like a natural college destination.

After his mother encouraged him to apply, though, Princeton emerged as his choice, even from afar. He first set foot on campus when he arrived in the fall of 2008. One of the buildings he recognized was the Frist Campus Center, from its cameo in the opening credits of the television show "House."

"The biggest question mark for me was the campus culture, what student life would be like and how I would fit in. I think that's the big question for anyone but especially for me coming from Oregon. How's it going to work?" said Fleming. "It worked very well. What I discovered about Princeton in terms of student life is that you can try to describe what campus culture is, but that's basically impossible to do. You have such a wide variety of people here. No matter who you are, what your interests are, you are going to find people here who are like you and share your interests."

With his time at Princeton drawing to a close, though, Fleming is looking back.

"I still have moments from time to time when it's hard to believe that this is a real experience — that I've been here for four years and have almost completed my studies here," Fleming said.

He's looking ahead, too. Fleming has accepted a position as a clinical research associate with the Interdisciplinary Melanoma Cooperative Group, part of the New York University Cancer Institute, where he will assist with skin-cancer research projects and perform research of his own. In the future, he plans to apply to medical school and pursue a career in medicine or public health.

Following the announcement of Fleming as valedictorian, Crouch, the director of the Glee Club and Chamber Choir, thought about Fleming's impact at Princeton.