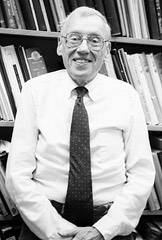 Princeton University professor emeritus Leland Allen, remembered for his influence on the field of theoretical chemistry and for his love of discussing his wide-ranging professional and personal interests with colleagues and students, died of Alzheimer's disease at the Acorn Glen assisted-living residence in Princeton July 15. He was 85.

By his retirement from the University in 2001, Allen, who rose to the rank of professor five years after coming to Princeton in 1960, had become a preeminent and prolific theoretical and quantum chemist. His more than 400 scientific publications included his mathematical explanation of electronegativity, which relates to the ability of atoms and molecules to attract electrons. His work provided a uniform method for estimating the electronegativity for chemical elements using universally available and generally intelligible data.

A tribute to Allen published in the International Journal of Quantum Chemistry in 2003 cited his numerous and lasting contributions to his field. James Harrison, a quantum chemistry professor at Michigan State University who studied under Allen and earned his Ph.D. in chemistry from Princeton in 1966, wrote: "Lee Allen is one of a select few active theoreticians who has seen first hand the evolution of the field of Quantum Chemistry from a rather esoteric subject practiced by very few specialists and not widely accepted by the larger chemical community to one that is universally acknowledged to be an indispensible foundation of modern chemistry. Very few of us have been fortunate enough to have had this experience and still fewer to have contributed so significantly to its achievement."

Allen's aptitude in theoretical chemistry has been attributed to his background in engineering and physics, from which he drew an understanding of mechanics, electricity and magnetism, and the various mathematical methods needed to explain what chemists observed. Allen received his bachelor's degree in electrical engineering from the University of Cincinnati in 1949 and completed his Ph.D. in theoretical physics at the Massachusetts Institute of Technology in 1956.

Allen's colleagues, family and past students remembered him as a person who possessed a quick and inquisitive mind that allowed him to absorb, dissect and analyze problems.

"He was one of the most interactive, enthusiastic scientists I've ever known in my life," said Joel Liebman, a chemistry professor at the University of Maryland-Baltimore County who earned his Ph.D. in chemistry from Princeton in 1970. One of the roughly 45 graduate students Allen advised at Princeton, Liebman recalled his mentor — with whom he remained close after leaving the University — as a tireless thinker who always pursued new ideas and perspectives, many from his students.

"One of the things that characterized Lee was the very wide variety of topics that he cared about, the fact that conversations with him were really fluent and flowing and non-judgmental, and always highly interactive," Liebman said. "He was so happy and intense when teaching his students, colleagues, coworkers and friends, and when learning from them in turn."

He passed that quality on to his students. Liebman said that Allen gave him "absolute intellectual freedom, encouragement and support" that fostered in Liebman an "intellectual courage and intellectual flexibility."

Allen's wife, Carol, said that her husband forged long-lasting friendships with many of his students, who often became his colleagues in later years. She said that Allen's "great legacy in terms of students" stemmed from his genuine love of science and drive to instill that in others. He taught their children math and science, and she and Allen often watched science programs together and attended lectures at the University and the Institute for Advanced Study.

"I am not a scientist, but he engaged me," Carol said. "I came a long way in my understanding of science through him. I don't think I would have gotten into any of that without him.

"Lee's lifelong passion and dedication to science included the view that engagement and discussion of 'hard science' should not be limited to within the walls of the academy," Carol said, "but that 'pure' science should and could be accessible and engaged in by scientists and non-scientists alike as a positive societal influence."

For all his academic success, Allen treated people without pretension, Carol said. In addition, she said, he encouraged women to pursue and excel in the male-dominated sciences at a time when women were often discouraged to do so.

Carol Deakyne, an associate professor of chemistry at the University of Missouri-Columbia who studied under Allen, recalled that he treated her as a colleague even in her early years as a student. Deakyne earned her Ph.D. in chemistry from Princeton in 1977. Before joining Allen's group, Deakyne had studied biochemistry, a topic that Allen was beginning to explore. He would often call upon her knowledge of the subject, she said.

"I always felt that Lee treated me as an equal, even as a grad student, let alone a woman," Deakyne said. "When I first started working with him, even when I didn't know all I needed to know, I was still treated respectfully.

"He was always eager to learn and whatever source he had to learn from he used it, even if it was a student," Deakyne said. "I remember having long, three-hour discussions with him, and they were so intense I would leave with a headache. We both learned a lot and would go back and forth trying to find out what the best answer to a particular problem was. My opinion was worth as much as his as far as he was concerned."

In addition to his wife, Allen is survived by his three children Abigail, Emily and Ethan, and his granddaughter, Hillary.

A memorial service for Allen will be held Saturday, Sept. 22, at the Unitarian Universalist Congregation of Princeton.