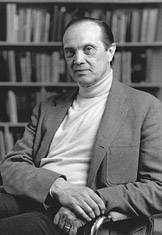 Miller, who joined the faculty in 1979, was an innovator in the study of language and cognition, helping to establish psycholinguistics as an independent field of research in psychology. In 1991, he was awarded the National Medal of Science, the highest scientific honor awarded by the United States, in recognition of his contributions to understanding processes of the human mind. He received an honorary doctor of science degree from Princeton in 1996.

Miller, together with Jerome Bruner and Noam Chomsky, led the "cognitive revolution" that replaced behaviorism as the leading psychological approach to understanding the mind in the 1950s, said Christiane Fellbaum, senior research scholar in computer science who worked closely with Miller at Princeton. "George believed that the human mind in all its aspects was interesting and worth studying — believe it or not, that was revolutionary at the time," she said.

Philip Johnson-Laird, the Stuart Professor of Psychology Emeritus and senior scholar at Princeton, said Miller's work has made a permanent impression on cognitive science.

"As long as scientists study the mind, they will honor ideas that he was first to formulate," said Johnson-Laird, who collaborated with Miller on the 1976 book "Language and Perception."

Miller's work spanned more than five decades. An early work, his 1951 book "Language and Communication," helped establish the field of psycholinguistics, a collaboration between linguistics and psychology.

In 1956, he was the author of "The Magical Number Seven, Plus or Minus Two," a paper that, in part, proposed new ideas about the way immediate memory works, suggesting that people can retain about seven "chunks" of information in what is commonly known as short-term memory. The paper became one of the most frequently quoted papers in the field. (And, as Miller often noted, also one of the most misquoted papers.)

Johnson-Laird said the paper reflected several of Miller's important skills. "He could think more deeply than others, and he could put his thoughts into beautiful transparent prose," he said.

The paper's attention-grabbing opening lines are well known in psychology: "My problem is that I have been persecuted by an integer. For seven years this number has followed me around, has intruded in my most private data, and has assaulted me from the pages of our most public journals."

He was also the main author of "Plans and the Structure of Behavior," a 1960 book that was a catalyst for the cognitive revolution in psychology.

Beginning in 1986 and continuing for many years, Miller helped oversee development of WordNet, a large-scale electronic reference that helps computers understand human language and continues to influence applications such as search engines.

During World War II, he worked on military voice communications at the Harvard University Psycho-Acoustic Laboratory. He earned his doctorate at Harvard in 1946.

He was an assistant professor of psychology at Harvard from 1948 to 1951, when he went to the Massachusetts Institute of Technology as an associate professor for four years. He returned to Harvard for the next 12 years. Named professor in 1958, he served as chair of the psychology department from 1964 to 1967.

Miller taught and studied at Rockefeller University from 1968 to 1982 and was twice appointed as a visitor of the Institute for Advanced Study.

He joined the Princeton faculty in 1979 and was named the McDonnell Distinguished Professor of Psychology in 1982. He and Gilbert Harman, the James S. McDonnell Distinguished University Professor of Philosophy, established the Cognitive Science Laboratory at Princeton. Miller was director of the McDonnell-Pew Program in Cognitive Neuroscience from 1989 to 1994. He transferred to emeritus status in 1990.

Fellbaum said Miller was a gentleman noted for his kindness to graduate students. Miller's son, Donnally, said that he remembers his family always opening its home to foreign graduate students at Thanksgiving, when they otherwise wouldn't have had anywhere to go.

"He was the sort of man who was generous with his time and took a lot of care with his students," Donnally Miller said.