If Sandra Bermann, Princeton's Cotsen Professor of the Humanities and professor of comparative literature, had to pick her favorite love poetry, it would be Shakespeare's sonnets. "I have loved them the most over the longest time for the range of emotion, theme and wit they reveal," she said. "Among those 154 poems, Sonnet 116, 'Let me not to the marriage of true minds,' still speaks to me with particular power."

Bermann, who enjoys reading love poetry "from as many parts of the planet as possible," had plenty of time to immerse herself not only in Shakespeare's sonnets, but also in the entire history of love poetry, in order to write a completely reconceived entry on the subject for the Princeton University Press' new edition of "The Princeton Encyclopedia of Poetry and Poetics," edited by Roland Greene and Stephen Cushman.

Bermann is one of 11 Princeton professors — among hundreds of contributors from all over the world — who wrote entries for the revision, only the fourth in more than four decades. 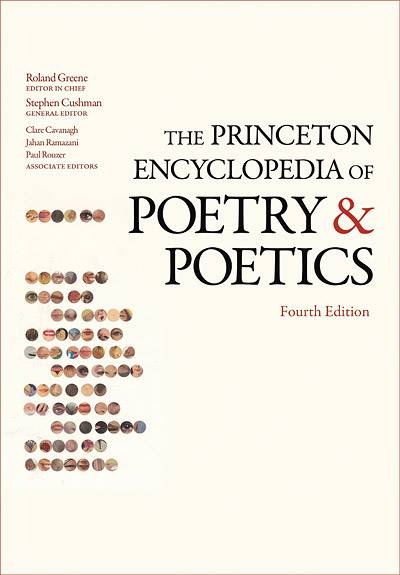 Peter Dougherty, director of Princeton University Press, which published the first edition in 1965, likened the job to "renovating a cathedral." The third edition was published nearly 20 years ago and the completion of the fourth edition — a slim 1,664 pages — has taken six years. "The new edition is considered a singular event in the humanities. It represents a statement of where the fields of poetry and literature are in the 21st century," Dougherty said.

Princeton poet Susan Stewart, the Avalon Foundation University Professor in the Humanities, calls the book "a compendium of all culture."

When Bermann set out to write her entry, she knew she would have to decide carefully what to include in her 6,000-word essay. "Since there is no way to detail all the many sorts of love poetry that have existed across the globe from earliest times to the present, I decided to offer some broader conceptions of the genre, as well as a number of more localized conventions, themes and examples. I wanted the piece to be informative and intriguing, encouraging the reader to explore this delightful topic independently," she said.

A "trailer" for her entry might be pulled from the thematic overview section, which begins: "Love poetry imaginatively presents the vicissitudes of that human emotion we call love. But what is love? Is it sexual pleasure, passionate desire, religious enlightenment, joyful connection to another, a painful disruption and reconstruction of self, or a cherishing of another human being? Is it idealized or sexual, public or private, a sickness unto death or an exhilarating rebirth of the mind and the senses? If we are to believe the poets, it is all of these and more."

Martin Kern, a professor of East Asian studies, wrote one of the 250 new entries, out of more than 1,100 in the book. An expert in ancient Chinese literature, Kern wrote on the Chuci ("Lyrics of Chu"), an anthology of southern Chinese poetry that contains songs from the third century B.C.E. through the second century C.E. and is one of the two principal sources of ancient Chinese poetry.

"Adding an entry on the ancient 'Lyrics of Chu' strikes me as utterly meaningful," Kern said. "For the last two millennia the Chuci — a poetry of spectacular beauty and sophistication that speaks inexhaustibly to the human condition — has exerted enormous influence on the literatures not only of China but of East Asia altogether."

Other Princeton professors who contributed to the book are (their entries appear in parentheses):

"The new edition incorporates a vast array of new knowledge from cultures around the world — especially emerging nations — and from new forms of expression," Dougherty said.

One of those new forms is electronic poetry, also called e-poetry and digital poetry, which, the entry explains, is created "using personal computers as platforms for compositions intended to be encountered and experienced in native digital format…. Electronic poems typically include one or more of the following: multimedia, animation, sound effects or soundtracks, reader interaction in the form of choices or other participatory features, and automated behaviors."

Another new entry is poetry slam, "A contest in which poets compete against each other with judges (chosen at random from the audience) assigning a score to each performance on a scale of one to 10 to determine the winner."

"The team of editors carefully evaluated what to keep, what to drop and what to add or change to make the book even more useful to 21st-century readers," said Anne Savarese, executive editor, reference, at Princeton University Press, who served as the acquiring editor for the new edition.

The revised encyclopedia now includes articles on the poetries of more than 110 nations, regions and languages, with expanded coverage of poetries of the non-Western and developing worlds. "Poetry is a profoundly global art form, and the new edition captures the excitement of this worldwide phenomenon," Dougherty said.

Update: Paul Muldoon's collaboration with Paul McCartney has been named among the best books of the year