'A Search for Answers' leads Princeton from Oscars to MoMA

In 1973, a short film about Princeton University went from being viewed at admission and alumni events to winning an Oscar at the Academy Awards. Forty years later, "Princeton: A Search for Answers" will be one of the documentaries featured at the Museum of Modern Art's annual Oscar film series on Sunday, Feb. 3, in New York City.

Produced at a time when Princeton was diversifying its student body, including the introduction of undergraduate coeducation in 1969, the film highlights the vibrancy of learning on campus and the connections between faculty and students.

"We thought the time was right to try and focus the attention of everyone on the fundamental educational issues facing Princeton. And, I think we succeeded in doing this," said President Emeritus William G. Bowen, who is shown in the film during his first years leading Princeton.

Play a clip from the 1973 documentary "Princeton: A Search for Answers."

The University originally commissioned the 28-minute documentary to provide a slice of Princeton life for prospective students, alumni and community members. The movie caught the attention of stage and film director Joshua Logan, a 1931 Princeton graduate, and later won an Oscar for Best Documentary Short.

"This was a time when our student population was changing and our intellectual horizons were expanding," said University Vice President and Secretary Robert Durkee, a 1969 Princeton alumnus who worked in Bowen's administration at the time the movie was made. 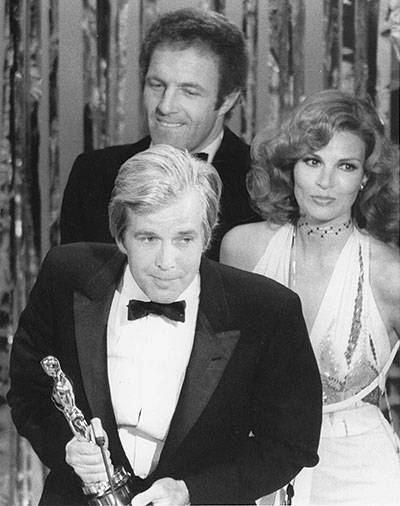 Filmmaker DeWitt Sage accepts an Oscar for the documentary "Princeton: A Search for Answers" at the 1974 Academy Awards ceremony. Hollywood stars James Caan and Raquel Welch presented the Oscar to Sage and film partner Julian Kranin. (Photo courtesy of the Academy of Motion Picture Arts and Sciences)

"The film was a way to communicate a message about the core purpose of the University, which is a search for answers," Durkee said. "No one would have guessed at the outset of filming that it would end up winning an Academy Award."

To convey its ideas on screen, Princeton hired filmmakers DeWitt Sage and Julian Kranin. Sage spent a semester observing classes and meeting with faculty, staff and students to develop a film treatment. Kranin then shot hours of footage on 16 mm color film over two months.

"The more I scurried around Princeton on my own, the more impressed I became," Sage said. "Princeton was and still is a place where you could start to form the basis of fundamental questions about your life and your existence and your identity."

Sage found inspiration in former Dean of the Faculty and Professor of Physics Aaron Lemonick, who opens the film fervently describing Princeton as a university where you can ask the enormous, yet simple questions of life.

"In fact, the whole place is nothing more than asking the questions and trying to answer them. … Who am I? What am I doing here? And where did it start and where is it going and why?" Lemonick says to a group of attentive students.

Bowen bookends the movie by concluding, "If people who come out of Princeton learn only that there is so much more to learn, and something about how to learn more, and how to get along with the remarkable variety of people who inhabit this Earth, we will have done very well indeed."

Kranin and Sage entered "Princeton: A Search for Answers" for Academy Award consideration. To the University's astonishment, the movie won the short documentary category. 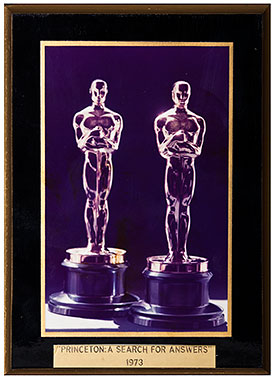 A plaque commemorates the Academy Awards given for the 1973 documentary "Princeton: A Search for Answers." The film will be shown at the Museum of Modern Art in New York City on Feb. 3 as part of the museum's "Oscar's Docs" exhibit. (Photo by Denise Applewhite)

"We had been nominated once before, but this time we won and it was an absolutely numbing experience," Sage recalled.

He added: "The most amazing power the Academy Awards have for a documentarian is that everyone in the world seems to watch the ceremony. I would have people I knew coming up to me years later to ask about that evening. As often as not, the first question they would ask me is 'Why didn't you kiss Raquel Welch?'"

The film is now a part of documentary history, and the Museum of Modern Art (MoMA) will screen it as part of the "Oscar's Docs" exhibit running from Feb. 2-14. This year, the collaboration with the Academy of Motion Picture Arts and Sciences will feature American stories from 1955 to 2002. "Princeton: A Search for Answers" will be shown at 2:30 p.m. Feb. 3, at MoMA. The screening is open to the public and ticketing information is available on the MoMA website.

"It is striking, and in a way encouraging, how lasting are the key questions and the answers to them," Bowen said.

More history of "Princeton: A Search for Answers" can be found on the Mudd Manuscript Library's blog. The original 16mm film is part of the University Archives’ Historical Audiovisual Collection.