Watching a flock of thousands of starlings take to the sky is a spectacular sight. As the flock changes direction, it looks like a formation of suspended iron filings guided by an invisible magnet in the sky.

Princeton University researchers have revealed a key piece of math behind this magic. Working with a team of Italian physicists, Professor Naomi Leonard and colleagues found that flocking starlings strike an optimal balance between the work of responding to social cues from their neighbors and the need to conserve energy. This trade-off yields a special number: seven. When starlings coordinate with their seven nearest neighbors, they form their characteristic flocks with the least effort.

The finding has implications not just for unlocking the mysteries of coordinated animal movements, but also for the field of robotics, in which engineers seek to emulate nature's efficiency in coordinating the activity of many individuals in uncertain environments. 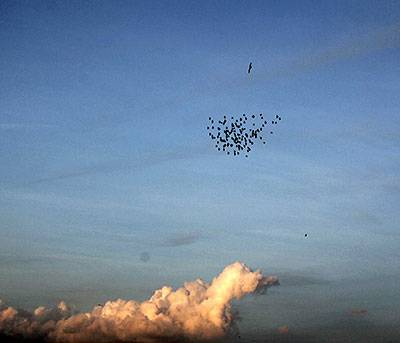 Starlings, like these photographed in Rome, are known for their dramatic flocking formations. A team led by Princeton researchers investigated possible tradeoffs the birds make between the cost of tracking more of their neighbors and the payoff of achieving better coordination. Their analysis revealed an optimal balance when the birds track about seven neighbors. This matches what a group of Italian researchers showed actually occurs in nature. (Photo courtesy of STARFLAG Project, ISC-CNR)

"In a flock with 1,200 birds, it is clear that not every bird will be able to keep track of the other 1,199 birds, so an important question is 'who is keeping track of whom?'" said Leonard, Princeton's Edwin S. Wilsey Professor of Mechanical and Aerospace Engineering.

The researchers published their results Jan. 31 in the journal Public Library of Science-Computational Biology. In addition to Leonard, the authors include Princeton graduate student George Young, Luca Scardovi of the University of Toronto, and Andrea Cavagna and Irene Giardina of the Sapienza University of Rome.

Starlings, a type of songbird, are particularly known to produce elaborate flock patterns. Each bird in the flock moves independently but must sense and react to neighboring birds. "There is significant uncertainty for each bird in what it measures about its neighbors, where its neighbors are heading, and how it may respond," Leonard said.

The research is part of Leonard's broader effort to study how flocks of birds or schools of fish synchronize their movements for a common goal such as finding food or avoiding predators. She seeks to understand how individuals contribute to the success of a mobile group, especially when the group has no individual leader — no magnet pulling around the iron filings. 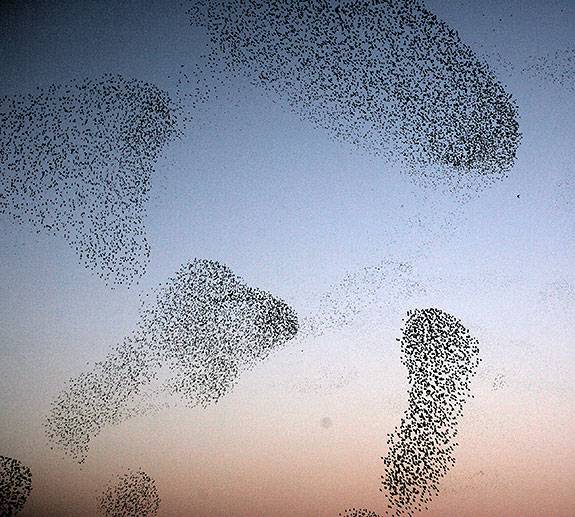 The researchers also examined the effect that the geometry of the flock formation would have on the efficiency of communication and coordination and found that the characteristic "pancake" shape of starling flocks is just as efficient as a more spherical shape, but if the pancake becomes too thin – sheet-like – then coordination requires more effort. (Photo courtesy of STARFLAG Project, ISC-CNR)

The Princeton team collaborated with physicists Cavagna and Giardina in Italy, who had previously identified seven as an important number in starling flocks. The Italian team had recorded videos of starling flocks that allowed detailed tracking of each bird. Setting up multiple cameras on top of a building, Cavagna and Giardina spent years filming the starlings flocking above a train station in Rome.

The physicists used more than 400 shots from many videos to figure out the positions and speeds of each bird. They ultimately showed that rather than keeping track of every neighbor within a certain distance, each bird tracks and responds to a finite number of its closest neighbors — seven in the case of starling flocks.

Young and Leonard then used this data to create a mathematical model that allowed them to evaluate the varying levels of coordination or consensus in the flocks depending on how many neighbors each bird tracks during flight. 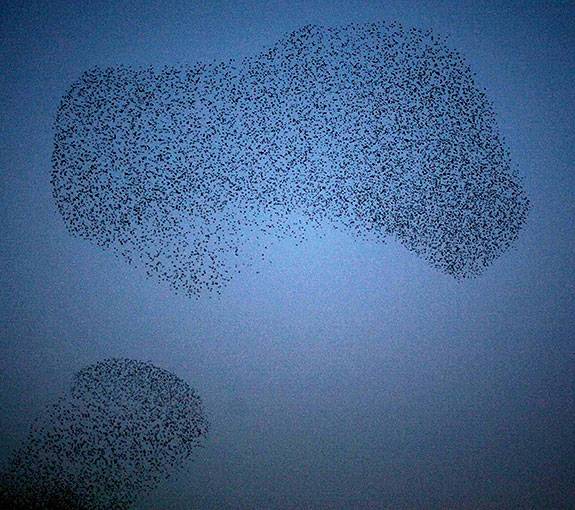 The research builds on earlier work done by a group of physicists in Italy who developed techniques to analyze stereographic (3-D) videos of starling flocks, tracked the positions and velocities of every bird, and then computed how many neighbors each bird monitors. (Photo courtesy of STARFLAG Project, ISC-CNR)

The model took into account the cost to the birds in terms of added uncertainty and energy expended when they track more neighbors. In essence, the model discounted the performance of the flock for each extra neighbor that a bird has to track.

The aim was to understand not just how well the birds coordinate as a group despite uncertainty, but how well they can coordinate at a minimal cost to each individual bird, Leonard explained.

Based on this cost-benefit model, the analysis showed that for a flock to be efficient, the optimal number of neighbors that a bird should pay attention to is seven, exactly the same as what the Italian researchers showed actually occurs in nature.

Young and Leonard further analyzed how the shape of the flock affects its performance.

"Scientists have discovered that these bird flocks are not sheets or spheres or cubes, but more like fluffy pancakes, a few birds thick," Leonard said. 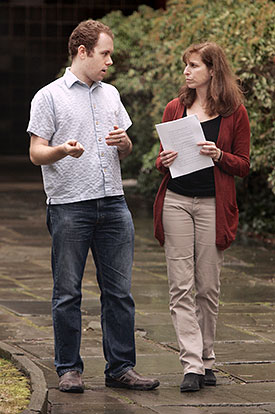 Graduate student George Young, left, was the lead author on a paper describing the research, which is part of a broader effort by Professor Naomi Leonard, right, to understand how flocks of birds or schools of fish synchronize their movements for a common goal such as finding food or avoiding predators. (Photo by Frank Wojciechowski)

Going beyond the real-world data set, Young and Leonard simulated flocks with more widely varying shape than the Italian flocks. They found that the optimal number, seven, depended not on the number of birds in the flock, but on its geometry — specifically its thickness.

The analysis confirmed that the pancake formation was best for efficiently dealing with uncertainty — a thinner sheet was not as effective, and a thicker, spherical shape was not necessary for improving the performance of the flock. "There is a steep incline in flocking performance just by being a little bit thick, and the fact that starling flocks exhibit this thickness is very interesting," Leonard said.

Young said it is unclear if these findings will be replicated across other bird species and whether other types of animals, such as fish or insects, would do something similar. "Other groups such as schools of fish have different characteristic shapes and thicknesses," said Young. "These other groups may have a different number of neighbors."

The team hopes to analyze other real-world data to understand whether the same factors are important for other animals to organize.

One goal of learning the rules of animal group dynamics is to better engineer mass-robot behavior. Mobile robotic swarms, whether undersea, terrestrial or aerial have many uses, such as monitoring dangerous environments or working together in a rescue operation.

"This result has far-reaching consequences for people like me who build cooperative teams of aerial robots," said Vijay Kumar, an engineering professor at the University of Pennsylvania who designs coordinated multi-robotic systems for search and rescue and disaster relief. Kumar said the overall finding of seven as the neighborhood size that optimizes the trade-off between group cohesion and individual effort is "quite surprising."

Leonard and Young said their goal is to use their biological insights to create networks of robots that perform better than the sum of the individual robots, inheriting the efficiency and versatility observed in animal groups. They have created an algorithm that allows robots in a group to adjust which other robots they interact with, thereby improving the performance of the group.

"We are trying to draw inspiration from biology to understand what measures of animal group performance can help us decide what measures we should use when we design responsive behaviors for robots," Young said.

The study was supported by the research offices of the U.S. Navy, Air Force and Army, as well as by the U.S. National Science Foundation and the Natural Sciences and Engineering Research Council of Canada.