Examining a case study of near-death experiences for six healthy men who volunteered to test an experimental drug in London has yielded important insights into potentially deadly over-reactions of the human immune system.

Using a database containing detailed measurements of the men's haywire immune responses to the drug, researchers at Princeton University created an unprecedentedly clear model for how immune signals called cytokines interact with each other.

"We have developed tools that could ultimately reveal how and when clinicians might intervene to prevent these dangerous inflammatory reactions," said Andrea Graham, assistant professor of ecology and evolutionary biology at Princeton, who is an author of the study published in the journal PLoS-One. 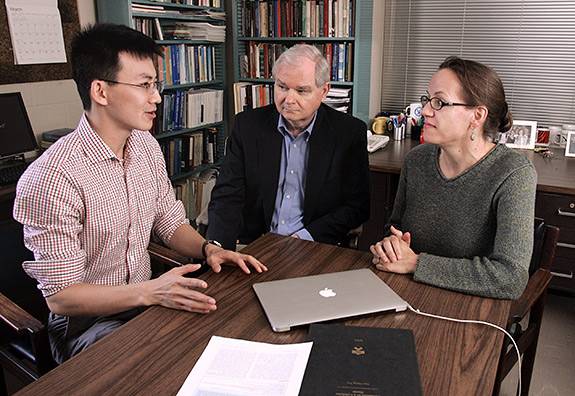 Princeton researchers combined numerical modeling and immunology to shed light on deadly over-reactions of the immune system. Hao Yiu (left), a 2010 alumnus, started the research in 2009 after taking a class from Andrea Graham (right), assistant professor of ecology and evolutionary biology. Yiu sought out Robert Stengel (center), professor of mechanical and aerospace engineering, to help guide the analysis. The ensuing collaboration resulted in a recently published paper. (Photo by Frank Wojciechowski)

The human immune system produces dozens of cytokines, with names like "interleukin-1" and "interferon-gamma," which act as messengers between cells, coordinating immune responses such as inflammation. The complex interactions among cells that cytokines mediate have been difficult to study, especially in the uncontrolled immune response — called a "cytokine storm" — experienced by the study volunteers. The Princeton research offers the first comprehensive way to calculate how cytokine signals interact to generate this potentially pathological storm.

The model could lead to a way to better predict immune system reactions to drugs as well as to pathogens such as viruses and bacteria.

From moon missions to medicine

An engineer and a biologist at Princeton, brought together by an undergraduate student, joined forces to study the experiment-gone-wrong. The research project began in 2009 when Graham was teaching her regular interdisciplinary immunology class for undergraduates in which she told her students about the ill-fated clinical trial, which took place at a research facility in London in 2006. The wealth of data from the mishap caught the attention of Hao Hong Yiu, a senior at the time majoring in chemical engineering. Looking to use the data as the basis for an independent project, Yiu sought out engineering faculty member Robert Stengel, professor of mechanical and aerospace engineering, to help guide his mathematical analysis.

"I thought the idea of combining the immunology with engineering was very exciting," said Yiu, who is now working on clinical and regulatory affairs at a medical device company.

As an aerospace engineer, Stengel designed the manual controls for the Apollo moon missions, but became interested in applying his mathematical skills to biological problems 10 years ago.

"The equations are just like those for planes and rockets, they just mean different things," said Stengel. "What we do for calculating how much fuel it takes to put a satellite in orbit, we can use to understand the minimum amount of drug to use to kill a pathogen."

Testing a new drug on healthy subjects is often done to establish a safe dose. In the London clinical trial, the volunteers received a drug called a monoclonal antibody, a particular variety of which was being developed as a possible way to boost the immune systems of leukemia patients whose own immune cells were killed by chemotherapy. But within minutes of receiving the drug, all the volunteers had signs of an inflammatory response. Within 12 hours, all were in intensive care. Each man’s immune system was undergoing a cytokine storm, posing a serious threat to his own tissues, including vital organs.

A cytokine storm can also be triggered by septic shock, blood transfusions or bone marrow transplants. Tens of thousands of people die from cytokine storms every year.

"The normal response of cytokines and how each is coupled in the overall reaction is not well understood," Stengel said.

The six men survived, but barely. A silver lining of the accident was the extensive data collected on each volunteer's immune reaction.

The data set presented an atypical case of well-documented immune responses in otherwise healthy people. Usually, such strong immune reactions only occur in patients with other critical illnesses, including those who have a compromised immune system.

The extensiveness of the data was also unusual — measurements of nine different cytokines were collected every six hours over five days, allowing the Princeton researchers to examine timing and interaction of the molecules over the short time period when the response occurred.

In previous studies of cytokine behavior, measurements were typically taken once per day for several days. "But everything is over by then," said Stengel. "The infection or inflammation process comes and goes in a matter of hours and is essentially over in two or three days. You really have to have data from the beginning."

The complexity of the analysis is also unique. Most previous studies examined only the interaction of a single type of cytokine with one other type, as opposed to the many interactions that are possible, said Yiu.

The researchers continued to refine their work after Yiu graduated in 2010 and the work was published in PLoS-One last October.

The research begins to address which cytokine inhibitors could have been given to the volunteers to prevent or at least lessen the immune reaction.

The work also helps solve a specific medical mystery surrounding the clinical trial: Would a lower dose of the experimental leukemia drug have avoided the reactions? The results indicate the answer is no — the model showed that even a lower dose would not have prevented the peak cytokine levels that caused the immune systems to go into overdrive.

The researchers said the collaboration highlights how an interdisciplinary approach by an ecologist and an engineer, bridged by a talented undergraduate, can result in a novel insight into a biological process — an insight that an immunologist working alone may have missed.

"What I really enjoyed about the engineering collaboration is quantitatively integrating all of the molecular data to understand the consequences at the whole-organism level," Graham said. Beyond cytokines, the model also provides a general way to analyze different types of data collected over time, she added.

"It was really interesting to see Professor Stengel's and Professor Graham's expertise come together to analyze this biological event," Yiu said.

The ultimate goal is to understand how to best treat any immune over-reaction — for example one caused by a pathogen that gets in the blood stream. The researchers would like to see similar methods used to analyze clinical trials using safer drugs to help understand how the immune system responds to different stimuli.

"It seems to me that this is only the beginning," said Graham. "With these quantitative tools applied to larger and better cytokine and other data sets, imagine the immunological insights that would emerge."