Alexander Polyakov, Princeton University's Joseph Henry Professor of Physics, was honored with the 2013 Fundamental Physics Prize for his lasting work in field and string theory. The $3 million prize was presented during a March 20 ceremony in Geneva by the Fundamental Physics Foundation. 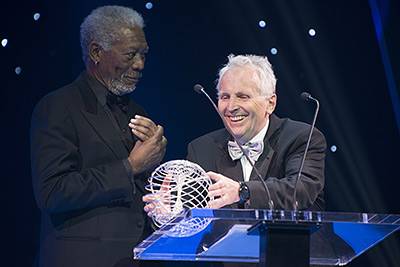 Alexander Polyakov (right), Princeton University's Joseph Henry Professor of Physics, was presented with the 2013 Fundamental Physics for his work in field and string theories. Actor Morgan Freeman presented the $3 million prize during a March 20 ceremony in Geneva. (Image courtesy of the Fundamental Physics Prize Foundation)

The award recognizes Polyakov's influential work in string theory, which looks to find common ground between quantum mechanics and general relativity. In additon, he was honored for his work in quantum field theory, a framework for modeling the dynamics of particles.

"I feel elated and surprised to receive this recognition," Polyakov told the foundation. "It is a great honor. I hope it will help attract more people to the field of physics and spur innovation and discovery across the globe."

The Fundamental Physics Prize is the world's highest paying academic prize and was established by Russian physicist and investor Yuri Milner.

Polyakov to receive Harvey Prize for science and technology