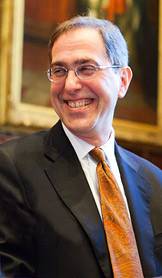 Christopher L. Eisgruber, Princeton's provost for the past nine years, has been named the University's 20th president, effective July 1. Eisgruber's appointment was announced Sunday, April 21, after a special meeting of the University's Board of Trustees. Eisgruber will succeed Shirley M. Tilghman, who will retire at the end of the academic year.

Christopher L. Eisgruber, Princeton's provost for the past nine years, has been named the University's 20th president, effective July 1. Eisgruber's appointment was announced Sunday, April 21, after a special meeting of the University's Board of Trustees. Eisgruber will succeed Shirley M. Tilghman, who will retire at the end of the academic year.

At a media conference following his appointment as Princeton University's 20th president, Christopher L. Eisgruber said it will be an honor to lead the University that has shaped his life ever since he was a Princeton freshman 34 years ago.

"Over the years I have developed a heartfelt appreciation for the characteristics that make [Princeton] special," Eisgruber said Sunday, April 21, in the Faculty Room at Nassau Hall, surrounded by portraits of University presidents and other important figures from the school's past.

"Most importantly, this University aims like no other to be simultaneously a great research university and the world's best liberal arts college and we insist on, what I consider to be, the audacious belief that these two things are not simply two equally desirable goals, but rather two complementary parts of a single ideal." 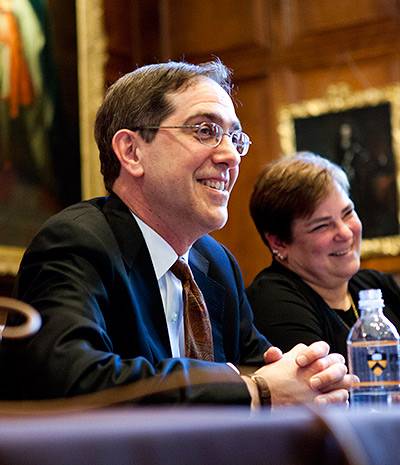 Kathryn Hall (right), chair of Princeton's Board of Trustees and the presidential search committee, said Eisgruber (left) was the unanimous and enthusiastic recommendation of the 17-member search committee following a six-month search.

The media conference was held a few minutes after the University's Board of Trustees held a special meeting and unanimously approved his nomination. Eisgruber will take office on July 1, the 20th in a line of presidents dating back to Jonathan Dickinson in 1747.

Eisgruber, Princeton's provost for the past nine years and a Class of 1983 alumnus, said it was an exceptional time in higher education and at Princeton, noting the legacy of outgoing President Shirley M. Tilghman, who will retire at the end of the academic year.

In her introduction, Kathryn Hall, chair of the Board of Trustees and the presidential search committee, said Eisgruber was the perfect choice.

"We were looking for our next president to be a person who could sustain our current success and also set a forward strategic course," she said. "To help lead Princeton through a period of what we think might be real change. And do it with innovation, creativity and judgment." 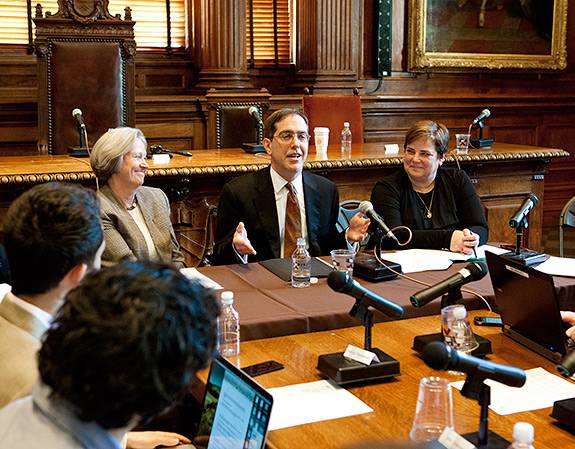 Tilghman (left) and Hall (right) listen to Eisgruber (center) address questions at a media conference in the Faculty Room of Nassau Hall, surrounded by portraits of University presidents and other important figure's from the school's past.

"We have in Chris the leader we are going to need for the next decade or so. I don't think we could be in better hands," Tilghman said.

"Over the last four decades … Princeton has added another commitment — a commitment to greater inclusivity and access. That commitment has many manifestations, including our unsurpassed financial aid program. But we also know that this is an area where we have more work to do," Eisgruber said.

"A place at Princeton is a gift, one that can transform the life of any student, faculty member or other scholar who is lucky enough to receive it. We have an obligation to make sure that this gift is fully available to the entire range of people who can benefit from it," he added.

While noting that Princeton is now more highly sought after than at any previous time, Eisgruber said it is an economic period when some outside of the University wonder whether a liberal arts education is worth it. At the same time, online education is poised to bring unprecedented change to higher education.

"Princeton thrives on challenges and I have no doubt we will thrive in response to these challenges. But to do so we will have to ask ourselves a series of tough questions in years to come," he said.

Among the questions Eisgruber asked were:

"All of this is obviously going to require a lot of conversation and discussion, which I regard as a good thing," he said. 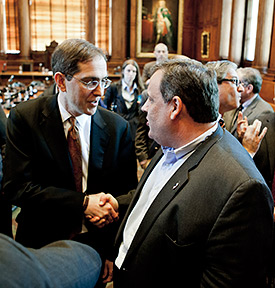 Eisgruber's remarks were met with applause from the Board of Trustees, including New Jersey Gov. Chris Christie, as well as the University Cabinet and the search committee, which included students.

In response to questions from the media, Brent Henry, vice chair of the Board of Trustees and presidential search committee, said the 17-member committee conducted an extensive and thorough search during the past six months before recommending Eisgruber.

"Choosing a president is probably one of the most important things a board can do," he said. "It was important we took the time to make sure we had the right person."

When asked about Eisgruber's tenure as provost, Tilghman cited his leadership during the "depths" of the country's economic recession in 2008 and 2009.

"The leadership that Chris provided to us … was absolutely critical to the way the University successfully navigated those years," Tilghman said, noting the transparent and inclusive manner in which he worked with University staff, faculty, students and alumni during that time.

On the topic of online education, Eisgruber noted the University is already participating in the Coursera platform, though there is still more consideration needed about how to harness online resources to benefit students on campus and across the world.

In the near term, Eisgruber said his priorities are building a team to continue administrative initiatives currently in place and to begin talking to the campus and alumni community after his term as president starts.

"I'm so honored, and so happy, by the opportunity to lead the Princeton community as it writes the next chapter in this University's extraordinary history," he said. 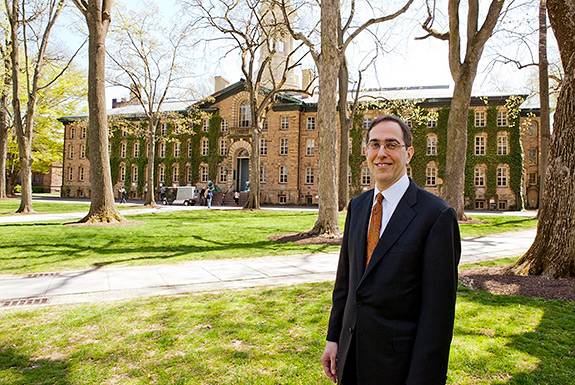