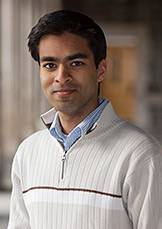 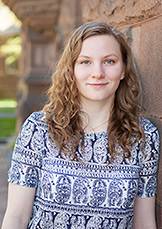 Aman Sinha, a mechanical and aerospace engineering major from Ivyland, Pa., has been selected as valedictorian of Princeton University's Class of 2013. Amelia Bensch-Schaus, a classics major from Swarthmore, Pa., has been named the Latin salutatorian.

The Princeton faculty accepted the nominations of the Faculty Committee on Examinations and Standing at its April 29 meeting.

After he graduates, Sinha, who is also pursuing certificates in applied and computational mathematics and applications of computing, will pursue a master's degree in information engineering at the University of Cambridge as a Churchill Scholar. In fall 2014 he plans to enroll at Stanford University for a Ph.D. in electrical engineering. This spring, he received a Hertz Fellowship for graduate studies in the sciences.

Sinha has received numerous awards as an undergraduate, including the George B. Wood Legacy Sophomore Prize, given to a junior for outstanding academic accomplishment the previous year, and the Barry M. Goldwater Scholarship, which is given to outstanding undergraduates concentrating in mathematics, the natural sciences and engineering. He twice received the Shapiro Prize for Academic Excellence, is a member of Phi Beta Kappa, and last fall shared the Class of 1939 Princeton Scholar Award, given to the student who achieved the highest academic standing for preceding scholarship at the University.

Bensch-Schaus studied Latin for six years before coming to Princeton, and upon her arrival on campus, began learning Greek. She also spent summers studying modern languages that feature prominently in Classical scholarship. A 2010 Shapiro Prize winner, Bensch-Schaus devoted her junior year to studying classics at Cambridge.

After graduation, Bensch-Schaus will teach Latin at Sherborne School in Dorset, the United Kingdom, as a U.S. Foundation Fellow through a program administered by the Program in Teacher Preparation. She later hopes to pursue a Ph.D. in classics and become a professor.