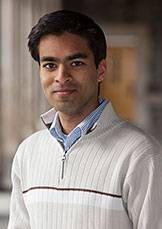 Princeton University senior Aman Sinha, an engineering student who has pursued research into computational and statistical modeling techniques, has been selected as one of this year's Churchill Scholars.

Sinha, a mechanical and aerospace engineering major, is one of 14 U.S. students who will spend a year studying at Churchill College at the University of Cambridge. The prestigious scholarship program is administered by the Winston Churchill Foundation of the United States.

Alexander Smits, the Eugene Higgins Professor of Mechanical and Aerospace Engineering and chair of the department, called Sinha "an outstanding student." Sinha worked as an intern in Smits' laboratory in the summer of 2010 assisting in collecting and analyzing data from a turbulent pipe flow experiment. Smits said the experiment involved highly sophisticated techniques and that Sinha not only mastered the methods but helped improve them. The work was presented at an American Physical Society meeting and published in 2011 in the scholarly journal Physics of Fluids.

"Aman is beginning a luminous academic and research career that will surely result in remarkable accomplishments," said Peter Bogucki, associate dean for undergraduate affairs in the School of Engineering and Applied Science and chair of the University's Churchill Nomination Committee. "He has acquired a robust research biography that spans both academic and industrial work, with capabilities crossing the worlds of fluid mechanics, complex systems and scientific computation."

The Churchill Scholarships, first awarded in 1963, are granted to students of noted achievement who wish to pursue graduate studies in the sciences, mathematics or engineering. The scholarship pays for a year of tuition and fees, living expenses, and travel, and at times provides a research grant.

Among his achievements, Sinha, of Ivyland, Pa., won the George B. Wood Legacy Sophomore Prize, given to a member of the junior class for outstanding academic achievement the previous year. He also shared the Class of 1939 Princeton Scholar Award, which is given to the student who achieved the highest academic standing for preceding scholarship at the University. He is a winner of the Barry M. Goldwater Scholarship, which is given to outstanding undergraduates interested in careers in mathematics, the natural sciences and engineering.

At Cambridge, Sinha plans to study with the Control Group in the Information Engineering Division. Afterwards, he plans to pursue a Ph.D. and embark on a career of research at the intersection of academia and the tech industry.