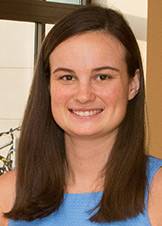 Princeton University senior Katherine Pogrebniak, a computer science major who intends to pursue a career in medicine and medical research, has been selected as one of this year's Churchill Scholars.

Pogrebniak, who began taking college-level math courses at the age of 8 and entered Princeton at 16, is one of 14 scholarship winners who will spend a year studying at the University of Cambridge while living at Churchill College. The scholarship program is administered by the Winston Churchill Foundation of the United States.

Mona Singh, a professor of computer science and the Lewis-Sigler Institute for Integrative Genomics, worked with Pogrebniak last spring on developing computational methods for predicting aspects of small molecules that can bind to certain proteins. The work has important applications in pharmacology.

"Katherine did an amazing job in her independent work, and got an incredible amount of work done," Singh said. "She worked at a graduate-student level, and was able to handle any task the project required. She did all this while carrying a full academic load at Princeton, maintaining a superb GPA, and participating in a range of activities."

Pogrebniak is the 40th Princeton student to win a Churchill Scholarship. The scholarships, first awarded in 1963, are granted to students of "exceptional academic talent and outstanding achievement" who wish to pursue graduate studies in the sciences, mathematics or engineering. The scholarship pays for a year of tuition and fees, living expenses, travel, and at times provides a research grant; the total scholarship is worth approximately $63,000.

Peter Bogucki, the engineering school's associate dean for undergraduate affairs, said that Pogrebniak is "an outstanding student who is destined to make great contributions at the intersection between computer science and biomedical research." He noted also that "she has been deeply involved with the life of the Princeton campus."

Among other achievements, Pogrebniak, of Jacksonville, Fla., won the Princeton Class of 1939 Scholar Award, which is given to the student with the highest academic standing at the end of junior year. She also won the Princeton Accenture Prize for computer science and twice the Shapiro Prize for Academic Excellence. Pogrebniak was a resident adviser at Wilson College for two years and served on the Princeton Priorities Committee this fall. She is a member of Phi Beta Kappa and the national engineering honor society, Tau Beta Pi.

At Cambridge, Pogrebniak plans to study for an M.Phil in computational biology, taking courses in functional genomics, computational neuroscience and network biology. She also plans to conduct research in developing computational methods to identify cancer drivers.

"One of the great rewards of working at Princeton is to be among such talented and dedicated students who will be future leaders in science and technology," Bogucki said.