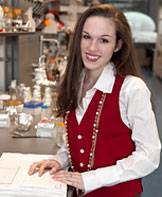 Princeton University senior Emma Yates has won a prestigious Churchill Scholarship, which provides support for study at the University of Cambridge to students who show great promise in research.

Yates, a chemistry major from Coconut Creek, Fla., is one of 14 students nationally to be awarded the scholarship by the Winston Churchill Foundation of the United States.

"Emma is an outstanding student who is absolutely passionate about scientific research," said Peter Bogucki, associate dean for undergraduate affairs in Princeton's School of Engineering and Applied Science and chair of the University's Churchill Nomination Committee. "She has already carried out accomplished research in the Department of Chemistry with a remarkable degree of initiative and resourcefulness for an undergraduate, and the many professors with whom she has worked think that she has tremendous promise for major scientific discoveries. Emma also recognizes that science has a human side and that research has complex ethical implications, hence her involvement in the Student Bioethics Forum as its president."

The Churchill Foundation, established in 1959, offers American students of exceptional ability and outstanding achievement the opportunity to pursue graduate studies in engineering, mathematics or the sciences. The scholars live in England at Churchill College, one of the newer colleges at Cambridge, built in tribute to the noted statesman, orator and strategist. The scholarship pays for a year of tuition, fees, living expenses and travel.

Among her achievements, Yates won the William Foster Memorial Prize in chemistry in 2010, given to the Princeton senior with the best departmental academic record. In 2009 she was awarded a Grand Challenges Summer Internship, during which she performed research on a class of antibiotics called pleuromutilin in the lab of Erik Sorensen, Princeton's Arthur Allen Patchett Professor in Organic Chemistry. The previous summer she was one of 15 undergraduates selected to participate in the Duke University Summer Research Opportunity Program, in which she conducted graduate-level research in the biomedical sciences.

While at Cambridge, Yates will pursue a master's degree in chemistry, focusing on the study of a neurological protein found in the brains of patients with Alzheimer's disease. Yates was inspired to undertake this research because her grandfather suffered from Lewy body disease, which has a molecular basis that is similar to Alzheimer's. Her grandfather's experience "defined the questions that I see as particularly compelling, and created a sense of real urgency and purpose in applying scientific creativity in order to try to solve them," Yates said.

After completing her studies as a Churchill Scholar, she plans to pursue a Ph.D. and embark on a career of academic research.