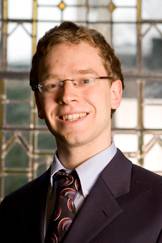 Princeton senior Aaron Potechin has been selected as one of 14 students nationwide to receive a Churchill Scholarship, which funds a year of postgraduate study at the University of Cambridge.

The Winston Churchill Foundation of New York City, established in 1959, offers the scholarships to outstanding American students to pursue graduate studies in engineering, mathematics or the sciences. The recipients study at Churchill College, one of the newer colleges at Cambridge, built in tribute to the noted statesman, orator and strategist. The scholarship pays for a year of tuition, fees and living expenses.

Potechin, who is from Short Hills, N.J., is a mathematics major with a special interest in theoretical mathematics, physics and computer science. He will pursue a certificate of advanced study in pure mathematics at Cambridge.

Peter Bogucki, associate dean for undergraduate affairs in the School of Engineering and Applied Science and chair of Princeton's Churchill Nomination Committee, said, "The Churchill Scholarship recognizes the remarkable intellectual achievement and potential for future accomplishment of an exceptional group of young scientists and mathematicians. It enables them to spend a year in Churchill College at Cambridge, a distinguished intellectual community that is right across the road from Cambridge's Centre for Mathematical Sciences, where luminaries such as Stephen Hawking can be encountered routinely. Aaron will undoubtedly flourish in this astonishing concentration of intellect, where he will make his own contributions to mathematical thought that will extend his accomplishments even further."

Potechin previously earned a Goldwater Scholarship, which is awarded to outstanding students interested in careers in mathematics, the natural sciences or engineering. He has received Princeton's Shapiro Prize for Academic Excellence; the Class of 1861 Prize as the highest-scoring sophomore on the Putnam examination, a competition sponsored by the Mathematical Association of America; and the Andrew Brown Prize for outstanding research in mathematics as a junior.

Potechin has conducted research at the University of Ghent in Belgium and received a National Science Foundation Research Experience for Undergraduates Award at the University of Minnesota. He also is a violinist and member of Princeton Sinfonia, as well as a tutor in mathematics and physics.

After his studies at Cambridge, Potechin plans to return to the United States to pursue a doctorate in mathematics.