The path of the peanut from a snack staple to the object of bans at schools, day care centers and beyond offers important insights into how and why a rare, life-threatening food allergy can prompt far-reaching societal change, according to a Princeton University researcher.

Before 1980, peanut allergies were rarely mentioned in medical literature or the media, said Miranda Waggoner, a postdoctoral researcher at the Office of Population Research in the Woodrow Wilson School of Public and International Affairs. Her article on the subject, "Parsing the peanut panic: The social life of a contested food allergy epidemic," was published recently in the journal Social Science & Medicine.

Starting around 1990, articles in medical journals began discussing the seriousness of peanut allergies, Waggoner said. At the same time, advocacy groups were emerging to raise awareness of the issue. By the mid-1990s, newspapers were printing articles with headlines such as "Nut Allergy Girl's Terror; Girl Almost Dies from Peanut Allergy."

And the 21st century brought descriptions of peanut allergies — in medical journals and the media — as an epidemic.

For those with a peanut allergy, ingesting the legume can lead to anaphylactic shock and, if untreated, death. But the allergy is quite rare and it isn't clear whether it is becoming more common, Waggoner said. 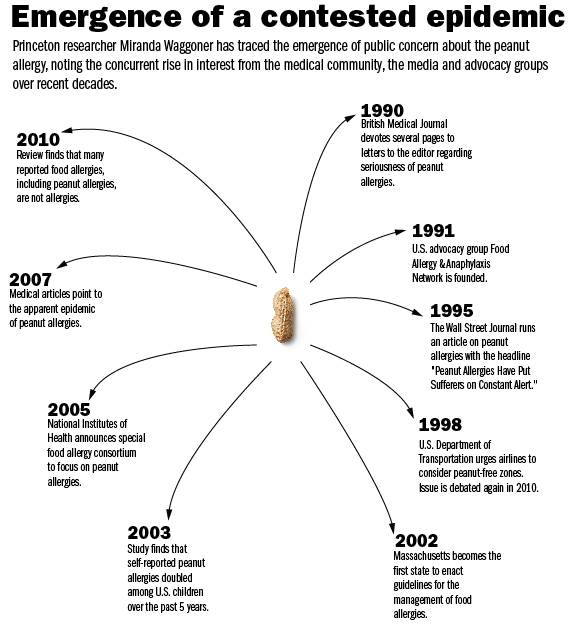 (Illustration by the Office of Communications)

The increased focus on peanut allergies in the medical community, the media and society in general combined to push changes like peanut bans in schools, Waggoner said.

"All of this was happening at about the same time to produce this big societal problem that is based on what is a small problem in terms of the population affected," Waggoner said. "One physician has written that the same number of people die each year from peanut allergies as from lightning strikes, yet the perception of peanut allergy risk has invaded the common social spaces we all inhabit — airlines, day cares and schools."

In 2002, Massachusetts became the first state to enact guidelines for the management of food allergies in schools, calling for "peanut-free" tables in the lunchroom under some circumstances. Many schools and day care centers have banned peanuts, and some baseball parks now offer peanut-free zones.

"This was part of a broader concern about food risks, changing perceptions of food production, as well as changes in the way we think about child risk," Waggoner said. "If you ask adults about peanut allergies when they were in school, most of them will say it wasn't an issue. Peanut butter and jelly sandwiches were a staple, healthy snack. It's the classic American kid snack.

"The fact that this sort of mundane food is under attack is really a potent moment for us as a society."

Several factors make it difficult to assess the prevalence of peanut allergies or whether the problem is becoming more common, Waggoner said. Before the 1990s, little data were collected on peanut allergies. And peanut allergy numbers are generally based on self-reporting, which leaves them open to interpretation and influence by increased media attention.

"There's definitely increased awareness about it," Waggoner said. "There's more medical research being done. There's more medical awareness, but what is contested is the prevalence, because it is based on self-reporting. We don't have a good sense of long-term change over time."

Experts now say about 1 percent of the American population has a reported peanut allergy, Waggoner said.

Another unknown is the cause of peanut allergies, Waggoner said, adding that researchers are using genetic and molecular testing in the search for a cause.

Peter Conrad, a medical sociologist at Brandeis University who is an expert on the medicalization of society, said Waggoner's research offers important insights into the evolution of peanut allergies as a public problem.

"This paper helps us understand how a relatively rare disorder, peanut allergies, has become seen as a public risk and even as a childhood epidemic," Conrad said. "While the individual risk is high, the risk on a population level is small.

Along with continuing medical research into the causes and prevalence of peanut allergies, Waggoner said another important area for future research is why it is the peanut allergy that has sparked this level of public interest and resulting changes in society.

"While eight foods account for over 90 percent of food allergy reactions, including milk, eggs, peanuts, tree nuts, fish, shellfish, soy and wheat, the peanut allergy has arguably received the largest share of medical and social attention," Waggoner writes in the paper.

Among the possible explanations: the severity of allergic reactions to peanuts and the harmful potential of such a mundane food, Waggoner said.

Waggoner's research was supported in part by a grant from the National Institutes of Health.