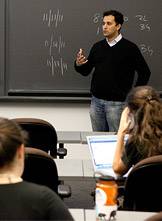 The course "Disease Ecology, Economics and Policy" focuses on global health, combining insights from epidemiology, biology and economics to explore how these influence policy. Ramanan Laxminarayan (above), a research scholar in the Princeton Environmental Institute (PEI) and a lecturer in economics and PEI, is co-teaching the course this semester with Bryan Grenfell, a professor of ecology and evolutionary biology and public affairs.

Instructors: Bryan Grenfell, a professor of ecology and evolutionary biology and public affairs, and Ramanan Laxminarayan, a research scholar in the Princeton Environmental Institute (PEI), and a lecturer in economics and PEI.

Grenfell, a population biologist, is interested in the epidemiology of infectious diseases and how strategies to prevent or control those diseases with vaccination, for example, can affect the speed and breadth of their spread. His work also explores how a variety of factors related to individuals and their communities interact to influence epidemics. A leading authority on epidemic dynamics, Grenfell joined the Princeton faculty in 2009. He received his Ph.D. from the University of York, England.

Laxminarayan is an expert in the field of economic epidemiology, which integrates epidemiological models of infectious diseases and drug resistance into the economic analysis of public health problems. He has been affiliated with Princeton since 2007. Laxminarayan is the founding director of the Center for Disease Dynamics, Economics & Policy in Washington, D.C., and is an adjunct professor at the Indian Institutes of Public Health in New Delhi. He earned a Ph.D. in economics and a master's in public health from the University of Washington.

Description: The course focuses on global health, combining insights from epidemiology, biology and economics to see how these influence policy. Broadly comprehensive, it is crosslisted in economics, ecology and evolutionary biology, environmental studies, and the Woodrow Wilson School of Public and International Affairs. The course follows a lecture format with hands-on work to teach students how to analyze and construct models of the spread of epidemics.

"Infectious diseases such as HIV, malaria, influenza, measles, SARS and tuberculosis continue to present a major global threat to human health and prosperity," Grenfell said. "The epidemic dynamics taught in the class provide powerful tools for assessing disease threats and how we control them. But to understand the full policy implications of these predictions, we need to allow for economic and social forces that constrain what control strategies are feasible and sustainable." 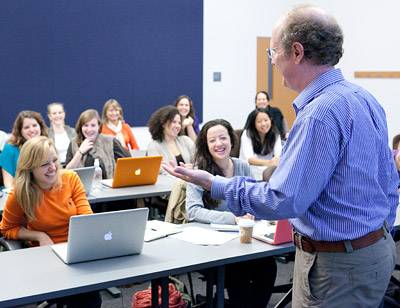 Grenfell, standing at right, says a goal for the course is to learn about the dynamics of epidemics and to "provide powerful tools for assessing disease threats and how we control them." The course also reinforces the need to understand economic and social forces that "constrain what control strategies are feasible and sustainable."

Inspiration: The course was created by Laxminarayan in spring 2009. He was particularly interested in raising the issue of antibiotics and public health because, he said, "The reality is that the collective action of every individual taking antibiotics has a huge impact on resistance." Last year, Grenfell and Laxminarayan joined forces to teach the class, which now extends its focus to vaccination strategies.

"It helps that we're close research collaborators at the relatively new interface between epidemic dynamics and economics, Grenfell said. "We think very similarly about some issues, but have a different angle on others. This leads to a bit of creative tension in the class; we often run our debates about current research by the students and they often come up with great ideas. This makes a very fun class for us and, we hope, for the students."

Key areas of focus: The course is centered around two main ideas. The first is exploring how to integrate pathogen biology and human behavior into the development of mathematical models of disease dynamics. In particular, Grenfell and Laxminarayan focus on the dynamics of vaccination against infections such as measles, influenza and dengue. They explore how biological complexities — such as the evolution of the influenza virus, which allows it to escape prevailing immunity in the population, and social forces, such as vaccine refusal — as well as economic constraints have potential to shape the likely "end game" against major infections.

The second focus is on the spread of antibiotic-resistant pathogens, and how individual behavior about antibiotic use in the United States and the rest of the world affects this public health issue. The course also covers the challenges in containing the spread of drug-resistant malaria parasites and the potential for innovative financing mechanisms to address this global problem.

He points out that citizens of other countries tend to be more educated about the dangers of antibiotic resistance, and therefore their behavior helps control the spread of the antibiotic-resistant bacteria. Laxminarayan said that in Scandinavia, for example, it is not the cultural norm for patients to ask doctors for antibiotics, while in the United States it is common practice for patients to both request and receive them, even for maladies such as the common cold, which is viral and does not respond to antibiotic therapy. 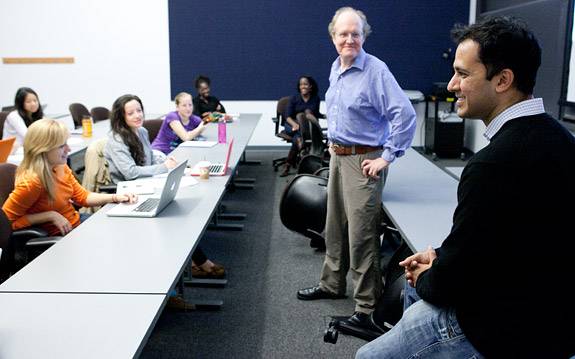 For the first time this semester, Grenfell and Laxminarayan joined forces to teach the course, bringing together their experience as close research collaborators, while also sharing their different perspectives on some issues. Students commented that exploring concepts and information from a range of disciplines helped them understand the complexities that need to be addressed when assessing disease spread and public health concerns.

The course also addresses the extensive use of antibiotics in agriculture in this country. "In the United States, more than 70 percent of antibiotics are used in agriculture, given to hogs, cattle and poultry, and sprayed on fruit trees," Laxminarayan said. "This widespread use of antibiotics kills weaker bacteria, but the stronger bacteria that survive become even more dangerous, returning to the general population in several ways. One way is through farm workers who can develop infections from inhaling particles contaminated with bacteria including some that are antibiotic-resistant. Another way is through eating certain foods, such as contaminated, undercooked meat."

Laxminarayan noted that these problems can be particularly serious in countries that do not monitor antibiotic residues in food. "American farmers must take livestock off antibiotics six or seven days before slaughter, meaning the meat we buy is free from antibiotic residue, so if it's undercooked it is not as dangerous," he said. "In many other countries, it is legal for farmers to feed animals antibiotics right up to slaughter, so if the meat is contaminated with antibiotic residues, the antbiotics are transferred to the humans and could cause resistance. Of course it would be better to stop using antibiotics for food production, but agricultural interests are too strong in most countries to end the practice." This is an example, Laxminarayan said, of how economics and policy have an enormous impact on the spread of disease. He added that in the last decade the European Union prohibited farmers from giving animals antibiotics, and antibiotic-resistance rates have declined, partly as a consequence.

Students say: Senior Amy Sweeny, an ecology and evolutionary biology major: "I am writing my senior thesis on immunological responses of wild mice and what we might learn from these responses in the context of drug interventions for humans. This course made me realize the intricacies of disease ecology beyond merely understanding the mechanisms of disease and the policies in place to treat them. The quantitative aspects of this course really challenged me to understand why and how a particular intervention for a disease is put into place, and why and how it succeeds or fails."

Senior Cayley Bowles, an ecology and evolutionary biology major who is pursuing a certificate in engineering biology: "The discussion of behavioral economics in relation to the spread of disease had the greatest impact on me because I learned that spread of disease is not solely dependent on biological factors. The course continually presented us with information that reinforces the idea that epidemics cannot be understood with only information from one discipline. A large number of factors influence the severity and timing of outbreaks, and specialists in each field can formulate the best control strategies only by collaborating with one another. This course has made it clear to me that when I enter the field of public health, I need to have the ability to draw on information from a variety of disciplines to explain disease patterns."

Senior Leah Cohen-Shohet, an economics major who is pursuing a certificate in environmental studies: "The course curriculum allowed us to study various theories in a real-world setting, enabling us to see where and why they break down. To me, this enlightens the dilemma that policymakers face — should I stick strictly to the theory? Or, should I deviate a bit because of circumstances that the theory did not account for? Furthermore, learning about concepts like common resource problems and desirable equilibriums underscores how much our decisions can affect others' well-being, which is why policymakers should be cognizant of these theories and concepts while designing a policy to maximize societal welfare."

The course received funding from the Princeton's Grand Challenges Program in Health.