by Andrea White for the Princeton Environmental Institute

Antibiotic consumption in livestock worldwide could rise by 67 percent between 2010 and 2030, and possibly endanger the effectiveness of antimicrobials in humans, according to researchers from Princeton University, the International Livestock Research Institute, the Université Libre de Bruxelles and the Center for Disease Dynamics, Economics and Policy.

Five countries — Brazil, Russia, India, China and South Africa — will experience a growth of 99 percent in antibiotic consumption, compared with an expected 13 percent growth in their human populations over the same period, the study authors report in the journal Proceedings of the National Academy of Sciences. In the United States, antibiotic consumption in animals currently represents up to 80 percent of total antimicrobial sales.

Because of the incredible volume involved, this increase in antimicrobial use in animals raises serious concerns about preserving antimicrobial effectiveness in the next decades, the researchers report. Global demand for animal protein is rising dramatically, and antimicrobials are used routinely in modern animal production for disease prevention and as growth promoters. The study focused on cattle, chickens and pigs, and identified the latter two as the main contributors to antibiotic consumption.

"The discovery and development of antibiotics was a major public health revolution of the 20th century," said senior author Ramanan Laxminarayan, a senior research scholar in the Princeton Environmental Institute. "Their effectiveness—and the lives of millions of people around the world — are now in danger due to the increasing global problem of antibiotic resistance, which is being driven by antibiotic consumption." 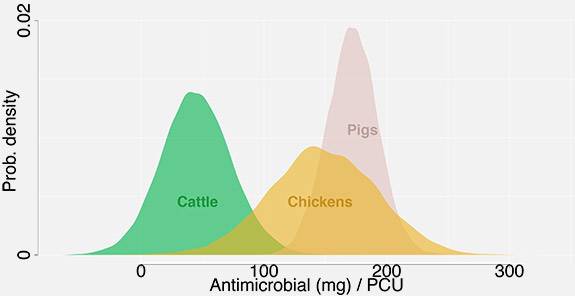 Princeton University-led research found that antibiotic consumption in livestock worldwide could rise by 67 percent between 2010 and 2030. Pigs outpace chickens and cattle in estimates of antimicrobial consumption in countries in the Organization for Economic Co-operation and Development, which is a consortium of 34 nations that includes the United States and most of the European Union countries. The graph measures antibiotic consumption in milligrams (bottom bar) in cattle, chickens and pork per population correction unit, or PCU, which corresponds to 1 kilogram of the respective animal. The average amount of antibiotics increases from left to right. The researchers found that pigs could consume an average 172 mg of antibiotics per kilogram of animal compared to 148 mg for chickens and 45 mg for cattle. (Image courtesy of Thomas Van Boeckel, Department of Ecology and Evolutionary Biology)

The study is based on a limited data set of veterinary-antimicrobials sales from 32 countries, all with developed economies. Before now there has been no quantitative measurement of global antimicrobial consumption by livestock — a critical component in assessing the potential consequences of widespread animal antibiotic use. Numerous studies have suggested links between the use of antimicrobials and antibiotic-resistant bacteria originating from livestock as well as their potential consequences for human health.

Two thirds, or 66 percent, of the projected global increase in antimicrobial consumption is due to the growing number of animals raised for food production. The remaining third is attributable to a shift in farming practices, with a larger proportion of animals projected to be raised in "intensive farming systems," or factory farms.

"For about a billion poor people, livestock are essential to survival," said Tim Robinson, principal scientist from the International Livestock Research Institute. "They are raising their livestock in extensive, backyard systems on the whole and do not use antibiotics as growth promoters or in disease prevention. They use them when their livestock are sick and will take a disproportionately high share of the consequences as effective drugs become more costly and less available in treating their livestock and themselves when they become sick."

Having reliable global data is essential for scientists and policymakers to both measure the extent of the problem and assess potential solutions, said lead author Thomas Van Boeckel, a Fulbright research scholar in Princeton's Department of Ecology and Evolutionary Biology.

"An important limiting factor in carrying out this first inventory of antibiotic consumption in animals was the lack of 'modeling-ready' data on veterinary antibiotic sales in many countries," Van Boeckel said. "Sometimes these data are simply not collected because of lack of veterinary surveillance programs, but sometimes the barriers are more political and or legislative. With this work we hope to trigger a momentum and show how useful such data could be to inform the design of global concerted policies against antimicrobial resistance."

"Antibiotic resistance is a dangerous and growing global public health threat that isn't showing any signs of slowing down," Laxminarayan said. "Our findings advance our understanding of the consequences of the rampant growth of livestock antibiotic use and its effects on human health—a crucial step towards addressing the problem of resistance."

In addition to Laxminarayan, Robinson and Van Boeckel, the research was conducted by Bryan Grenfell, the Kathryn Briger and Sarah Fenton Professor of Ecology and Evolutionary Biology and Public Affairs at the Woodrow Wilson School of Public and International Affairs; and Simon Levin, the George M. Moffett Professor of Biology and professor of ecology and evolutionary biology. In addition, two scholars from the Center for Disease Dynamics, Economics and Policy in Washington, D.C., were involved as well as Marius Gilbert from the Université Libre de Bruxelles.

The study, "Global trends in antimicrobial use in food animals," was published March 19 in Proceedings of the National Academy of Sciences. The research was funded through the U.S. Department of Homeland Security; the Organization for Economic Co-operation and Development; the Bill and Melinda Gates Foundation; the RAPIDD Program; the National Institutes of Health Fogarty International Center; and the Princeton University Grand Challenges Program.