The "Culture of Violence Summit," a half-day policy forum held May 28 at Princeton University, took a broad, nonpartisan look at gun violence in America as a public health imperative. Speakers drawn from politics, education, medicine and public policy called the problem of gun crimes multifaceted. Panelists examined the collaborative roles science, research and public education have in the gun debate. 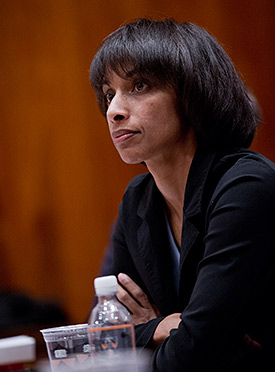 Cecilia Rouse, dean of the Woodrow Wilson School of Public and International Affairs, introduces the "Culture of Violence Summit" at Princeton University on May 28. The conference focused on gun violence as a public health issue. (Photo by Sameer Khan)

"In organizing today's discussion, we sought to reframe the gun policy issue as a public health issue rather than as an issue about individual rights," said Cecilia Rouse, dean of the Wilson School, in her opening remarks.

Rouse, who is also the Lawrence and Shirley Katzman and Lewis and Anna Ernst Professor in the Economics of Education, introduced Princeton President Shirley M. Tilghman to the audience at Dodds Auditorium.

"Shirley is completely committed to Princeton's informal motto 'In the nation's service and in the service of all nations,' so it's not surprising that she's the inspiration behind today's conference," Rouse said.

"In the context of public health, an epidemic is what we face," said Tilghman, quoting from the New England Journal of Medicine, which published that the United States has "the most guns, the weakest gun laws, and by far the highest rates of gun homicide, gun suicide, and accidental gun death" among developed nations.

"All of us have seen the stories of shattered families and distraught communities that play out all too often in the news," Tilghman said. "If lives are to be saved and injuries reduced, we need to approach this issue not in terms of the Second Amendment — with its hotly contested meaning and appeal to abstract rights — but in terms of concrete national well-being, much as we have dealt with smoking in public settings, industrial emissions, or the use of seatbelts and child restraints in motor vehicles.

"At a fundamental level, we must accept that the problem of gun-related violence directly or indirectly affects us all, and that the campaign against it will not be won by banner headlines but by education, one mind at a time," she said. 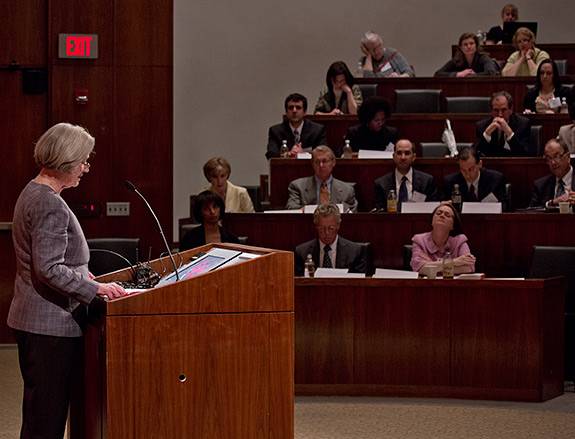 Princeton President Shirley M. Tilghman called gun violence an "epidemic" that affects everyone directly or indirectly. Her remarks set the stage for examining gun violence through the same lens as other public health threats including smoking in public settings, industrial emissions, or the use of seatbelts in motor vehicles. (Photo by Tori Sulewski)

Steven Altschuler, CEO of the Children's Hospital of Philadelphia (CHOP), shed light on the impact of gun violence on children. "The tragedy at Sandy Hook Elementary School [in Newtown, Conn.] was the most violent act against children that I've seen in my career," he said. "Now is the time for action."

Altschuler explained how a model for reducing gun-related deaths could be taken from the automobile industry. "For example, [CHOP] experts in the fields of medicine, epidemiology, biomechanics, engineering and behavioral science worked together to improve the design and regulation of vehicular child restraints and airbags," he said. "Over the course of the last decade, their work has influenced policy across the nation, contributing to a dramatic decline in the number of children who were injured or killed in car crashes."

David Knowlton, president and CEO of the New Jersey Health Care Quality Institute, said that the successful efforts in reducing car-related injuries and fatalities were a result of a public health call to action. Similar initiatives have already addressed such "value-based subjects" as sexually transmitted diseases, AIDS/HIV, alcoholism, drug abuse and smoking, he said.

"The ultimate solution will most likely be created from the contributions from all sides rather than the prevailing of one particular point of view," Knowlton said. "The public health model holds just such an orientation. It is my hope that we will go beyond discussion of personal rights and focus on collective safety, for I firmly believe that this is the only 'path to yes.'" 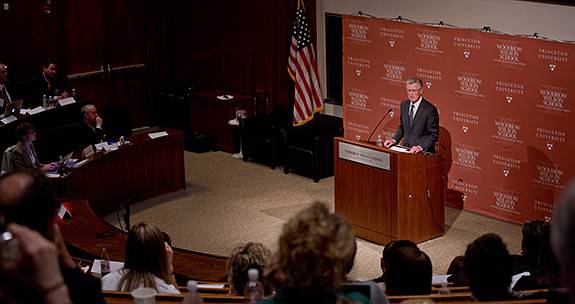 Former New Jersey Gov. James Florio focused his remarks on public education. "The Newtown massacre has mobilized people's opinion in ways we've never seen before … and lifted the level of awareness of the American people to a subject that many of us have been involved with over a long period of time: the epidemic of gun violence," he said. "Public education is an essential component of the effort of the epidemic of gun violence."

Florio recounted the strategy he took after passing "the toughest assault weapon ban in this country" early in his administration, only to see it repealed in 1992 by legislators voted in through the help of the gun lobby. He vetoed the bill that repealed the ban.

"That's when public education came into play," Florio said. "We mobilized everyone we could think of. Health care professionals came to us and said this is a health care problem. Educators testified about the trauma of children when they experienced gun violence. We mobilized the clergy, who said, 'This is not only a public policy issue, this is a moral issue.' We mobilized policemen, sheriffs, firemen — the people who most vividly experienced the problem of gun violence."

Florio described how his administration staged events, held op-ed meetings with newspapers and encouraged people to call their legislators. "When the final vote came, not a single senator voted to override my veto," he said. "Such is the power of public opinion. It was truly participatory democracy on steroids." 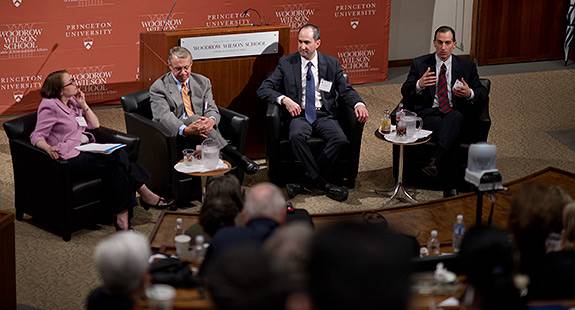 Heather Howard (above left), director of the State Health Reform Assistance Network and a lecturer in public affairs at the Wilson School, moderates a panel on the role of research in informing the gun violence debate. Panelists included William Schwab (second from left), the founding chief of the division of traumatology and a professor of surgery at the Perelman school of Medicine at the University of Pennsylvania; Jon Vernick (second from right), co-director of the Johns Hopkins Center for Gun Policy and Research; and Charles Branas, a professor of epidemiology at Perelman. (Photo by Sameer Khan)

Research as the catalyst for change

One of the panels centered on how to use research to inform the gun violence debate. Moderator Heather Howard, director of the State Health Reform Assistance Network and a lecturer in public affairs at the Wilson School, posed the question: "Does research change the conversation?"

Jon Vernick, co-director of the Johns Hopkins Center for Gun Policy and Research and co-editor of "Reducing Gun Violence in America: Informing Policy with Evidence and Analysis," started his career conducting research to reduce auto-related fatalities. He said that since the early 1960s, the rate per mile traveled of motor vehicle crash deaths has declined by more than 75 percent, "an enormous public health success story."

He attributes that dramatic shift to an aggregate of driver education, lowering the legal blood alcohol limits for drivers, seat belt laws, making cars and roadways safer, even changes to social norms. Vernick said the key is "not just understanding the risk factors and the causes of gun violence, but to use research to evaluate what works and what doesn't work and to put that information into the hands of policymakers."

Vernick noted that while it has been extremely challenging to get funding for gun control research, there is some light at the end of the tunnel. He discussed two kinds of technology that could make guns safer and reduce gun deaths: the "smart gun," which can only be operated by its authorized user, using the same "off the shelf" fingerprint technology that can block others from using another person's computer or cell phone; and the loaded chamber indicator device, which shows if a gun is loaded. Research indicates this device could prevent 20 percent of all accidental gun deaths, Vernick said.

"It's not rocket science," he said. "The idea is you do this approach, you do that approach, and comprehensively you start to reduce the toll."

William Schwab, the founding chief of the division of traumatology and a professor of surgery at the Perelman School of Medicine at the University of Pennsylvania, has spent his career conducting research in surgical techniques to save the lives of those with gunshot wounds. "We operate on one gun shot wound every day," he said. "It's an American problem. We are the laughingstock of the free world."

Charles Branas, a professor of epidemiology at Perelman, underscored the gravity of Schwab's remarks. "When you compare the United States to other high-income Western democracies, our rates of crime are pretty average, but what's enormously different is how often that crime results in death, and that is because our fatal crime is much more likely to involve a gun," he said.