by Tara Thean, science writing intern, Office of the Dean for Research

Tara Thean, who has an A.B. from Princeton in ecology and evolutionary biology, conducted her senior thesis research on communication between bottlenose dolphins, with support from the University and the Woods Hole Oceanographic Institution. She will continue her research this fall when she begins working toward a master's degree in biological science at the University of Cambridge.

Below, Thean, who is a science writing intern this summer in Princeton's Office of the Dean for Research, describes the journey from identifying her research topic to producing her first research findings, while learning many practical lessons about being part of a research community. 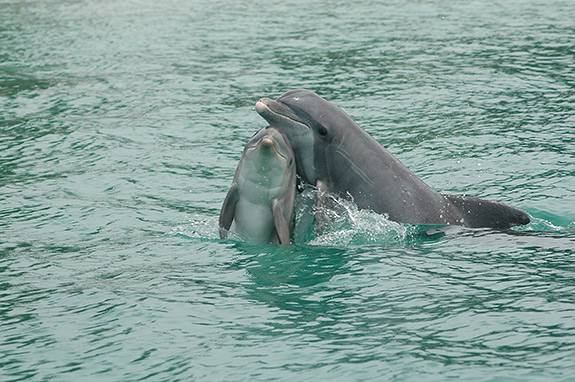 For her senior thesis research project, Tara Thean compared whether bottlenose dolphins' whistles were influenced by the whistles of other dolphins. Above, bottlenose dolphins swim off the Florida coast, where Thean spent a week in 2012 recording dolphin whistles. (Photo courtesy of the Chicago Zoological Society Sarasota Dolphin Research Program. Photo taken under National Marine Fisheries Service Scientific Research Permit No. 15543)

The research interest that would consume nearly two years of my Princeton career and inspire my postgraduate work all began with a cold call. At the start of my junior year, armed only with the knowledge that I wanted to study marine animal behavior, I tried my luck at various laboratories in ocean research institutions around the country.

Of the few that got back to me, one stood out: an opportunity to investigate how bottlenose dolphins learn to communicate with one another. The very question of what animals are saying to each other, and why, is one of ancient interest to both scientists and anyone who has read books such as "Animal Farm" or "Black Beauty" or watched "The Lion King." Bottlenose dolphins, whose communication system is arguably the closest thing to human language that we have found in the animal world, seemed to be ideal organisms with which to investigate this question. I quickly immersed myself in my topic, and two years later have found myself not only with exciting findings, but also with tremendous respect for the traditions of mentorship and collaboration in the scientific world.

A distinctive facet of bottlenose vocal repertoire is the signature whistle unique to each dolphin whose function is remarkably similar to that of names in humans. I wanted to understand how social influences affect what these whistles ultimately sound like, beginning with dolphin offspring, called calves. We see social influence on language in human children, who typically pick up speech habits and accents from their parents or other adults immediately around them. I wondered whether dolphins behaved similarly: Do calves model their whistles off the adults near them? 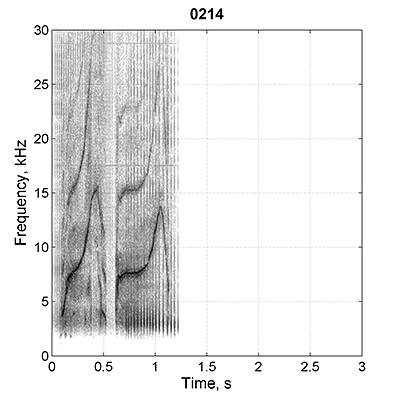 This spectrogram is a visual representation of the frequency, in kilohertz, of the dolphin whistle heard in the audio clip below. As one method of assessment, Thean compared the patterns and shapes in spectrograms of dolphin whistles to determine the differentiation between individual dolphins in the wild and in captivity, and found that the captive dolphins' whistles were more similar to those of their frequent associates than were the wild dolphins' whistles. (Image courtesy of the Chicago Zoological Society)

Research question in hand, I flew to Florida for a week during the spring of my junior year to record the vocalizations of wild dolphins under the auspices of the Chicago Zoological Society's Sarasota Dolphin Research Program. Each morning, we would set out in outboard-powered vessels, search for dolphins in the water, and gather biological, ecological and behavioral data on them. It became obvious to me even during this data-gathering process that it would be impossible to bring this project to fruition in isolation.

Laela Sayigh, a research specialist and my mentor during a nine-week fellowship at the Woods Hole Oceanographic Institution, guided me through whistle collection. Our research team was comprised of biologists, engineers and veterinarians who helped me navigate the unpredictable terrain of field research. From discussions with them, the specifics of my research methodologies began to germinate, and I gained the confidence I needed to execute my investigation at Princeton in the fall.

That confidence was eroded multiple times during the actual analysis and writing process. In field biology, you quickly realize that you must make compromises between your ideal approaches and practical reality. If a dolphin wasn't whistling loudly enough, for example, I would have to make do — I couldn't go back to Sarasota and "find" that dolphin again in the open water. Here, again, I was grateful for collaborators: my thesis adviser James Gould, a professor of ecology and evolutionary biology, seemed to intuit all my concerns as though he had been there himself.

When I faced difficulties quantifying similarity between the whistles of two dolphins, I turned to an algorithms specialist at the University of Tennessee, who guided me through the technical and conceptual concepts that I need to know. A graduate student at the University of Chicago provided me with whistles from dolphins in captivity that I used to compare to whistles from dolphins in the wild.

I used two methods to measure how similar the whistles were: automated signal processing, in which an algorithm measured the distance between frequency-time points along two whistle samples; and human visual comparisons, using the human eye to compare whistle spectrograms — which visually depict the frequencies of sound — to one another.

Months later, my results suggested that the captive dolphins' whistles were more similar to those of their frequent associates than were the wild dolphins' whistles. This was an intriguing finding, and may be a consequence of the different conditions that dolphins face in captivity and in the wild. Captive dolphins are typically in constant acoustic and visual contact with only the few other dolphins housed in the same tank, while wild dolphins encounter numerous others when they are developing their whistles.

We could think of an analog in humans: a child who lives with only a few other individuals might develop speech and accent tendencies very similar to those individuals, while one exposed to more people could well sound like a mixture of all of them. While I plan to take a closer look at this hypothesis, and refine my data and methodologies to support it, the initial results provide compelling evidence of how environmental influence may contribute to dolphin vocal repertoire. 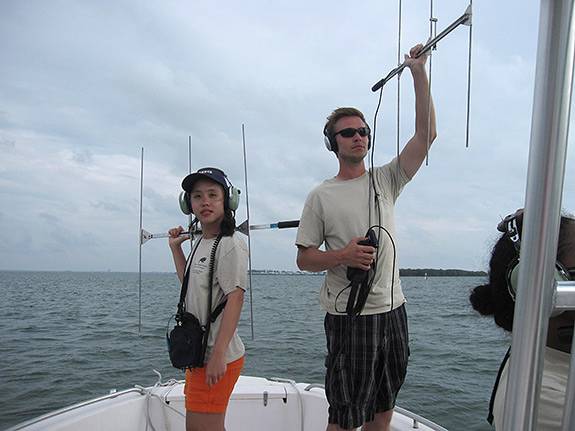 Tara Thean (left) and Frants Jensen, a postdoctoral fellow at the Woods Hole Oceanographic Institution, hold audio equipment on one of their excursions to find and collect data on bottlenose dolphins. (Photo courtesy of Tara Thean)

The chance to uncover a piece of knowledge about the universe was certainly an exciting part of writing my thesis. However, the greatest privilege of participating in this formidable portion of the Princeton education was how it pushed me to interact with so many different kinds of individuals. Whole chunks of my thesis would not exist had it not been for an offhand comment from a graduate student or a suggestion from the statistics expert who worked down the hall. These people — biologists, mathematicians, veterinarians, computer scientists — were at the heart of my thesis experience, and they are the reason I feel like the beneficiary of an absurd amount of good fortune for making the right cold call two years ago.