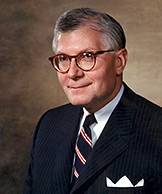 Photo courtesy of the Dietrich Foundation

A substantial bequest from industrialist and philanthropist William S. Dietrich II, a member of Princeton University's Class of 1960, will endow the University's Economic Theory Center, which has been renamed in his honor.

His gift will also support undergraduate and graduate student financial aid by establishing a fund for the William S. Dietrich II Scholars and Fellows. The bequest will be distributed annually to the University from the Dietrich Foundation of Pittsburgh, which was created after Dietrich died in 2011.

"We are honored by William Dietrich's bequest, and inspired by his deep commitment to higher education," said Princeton President Christopher L. Eisgruber. "His gift will provide essential resources for our economic theorists, whose brilliant research helps us to conceptualize markets and analyze behavior. In addition, his support for financial aid will uphold Princeton's commitment to admitting talented undergraduates regardless of their financial circumstances and attracting top-caliber graduate students from around the world."

The center, now called the William S. Dietrich II Economic Theory Center, was established in 2008 to support and disseminate faculty research in economic theory. It comprises 19 faculty members drawn from Princeton's departments of economics, computer science and politics, and the Woodrow Wilson School of Public and International Affairs. Their research — such as a groundbreaking study of the theoretical foundations for market design, political analysis and financial regulatory reform — is contributing to a body of knowledge that will undergird future economic policy.

The Dietrich gift will provide sustained funding for faculty research, seminars, fellowship programs, distinguished long- and short-term visitors from around the world, and symposia such as the annual Princeton Conference on Political Economy, which gathers economists, political scientists and other scholars to address current issues in the field.

"In this era of rapid economic change, the center's work has never been more important, and Mr. Dietrich's gift will be vital to extending its reach," said Marco Battaglini, director of the center and professor of economics. "The endowment will secure the center's future and help to advance its pioneering work in the study and applications of economic concepts."

Gene Grossman, chair of the Department of Economics and the Jacob Viner Professor of International Economics, said the impact of Dietrich's bequest extends beyond economic theory to the field of economics in general.

"In an increasingly global economy," Grossman said, "we need better tools and models to help us understand individual decision-making, strategic behavior and complex economic interactions. I am confident that the Dietrich Center will make important contributions to the way we think about economic choices and apply our understanding in the real world."

Dietrich was the chairman of Dietrich Industries, a Pittsburgh-based steel products company that his father founded. He graduated from Princeton with an A.B. in history in 1960 and served six months in the U.S. Marine Corps before joining the family company. He oversaw the growth of Dietrich Industries from a small scrap steel business to the nation's largest manufacturer of light metal framing for the construction industry. He also continued his education, earning M.A. and Ph.D. degrees in political science from the University of Pittsburgh.

The company was sold to Worthington Industries in 1996, after which Dietrich continued to serve as a director until 2008. He used the proceeds of the sale to establish the Dietrich Charitable Trusts, which he managed. He also served on the boards of numerous Pittsburgh institutions, including Carnegie Mellon University and the University of Pittsburgh, as well as on the advisory council of Princeton's Department of History. He wrote two books, "In the Shadow of the Rising Sun: The Political Roots of American Economic Decline," in 1991, and "Eminent Pittsburghers: Profiles of the City's Founding Industrialists," in 2010, and was working on a third, about the economic rise of China, when he died.

After his death, the Dietrich Foundation was formed to carry out his bequests, which included two of the largest charitable contributions in the history of higher education to Carnegie Mellon University and the University of Pittsburgh. Dietrich also made transformative gifts to other institutions in Pittsburgh and Western Pennsylvania, as well as to Princeton.

"The Dietrich Foundation is pleased to be able to support work at Princeton that reflects Mr. Dietrich's passionate interests in higher education and in the global economic market," said Edward J. Grefenstette, president and chief investment office of the Dietrich Foundation. "This gift to endow the Dietrich Economic Theory Center and support future generations of Dietrich Scholars and Fellows is an important milestone in Bill Dietrich's remarkable charitable vision."