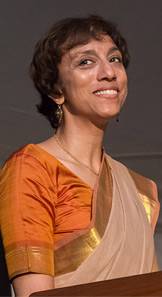 The "Many Minds, Many Stripes" conference, held Oct. 17-19, offered Princeton University's graduate alumni the opportunity to return to campus to participate in intellectual and social offerings. Above, Kavita Ramdas, a Ford Foundation representative in New Delhi and a 1988 graduate alumna, gives a keynote address on gender inequality. 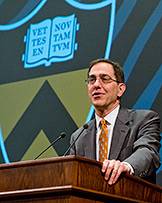 Princeton President Christopher L. Eisgruber welcomes graduate alumni back to campus, with remarks focused on the value graduate students have in the University's mission and the positive impact they have around the world as alumni. 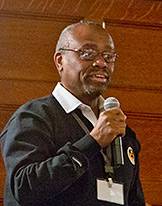 Sekazi Mtingwa, a 1976 graduate alumnus in physics, offers Eisgruber ideas on how the University can better inform policymakers about the value of scientific research and federal research funding. 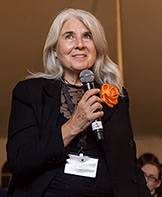 Representing a wide range of intellectual, geographic and demographic affiliations, Princeton University's graduate alumni gathered on campus for the "Many Minds, Many Stripes" conference Oct. 17-19. It was the first University-sponsored gathering of its kind for all graduate alumni, timed to celebrate the 100th anniversary of the Graduate College.

About 950 alumni and guests attended presentations by alumni, faculty, staff and students and enjoyed networking opportunities, campus tours and social gatherings. The conference was organized by the Office of the Alumni Association, in partnership with the Association of Princeton Graduate Alumni (APGA) and the Graduate School. 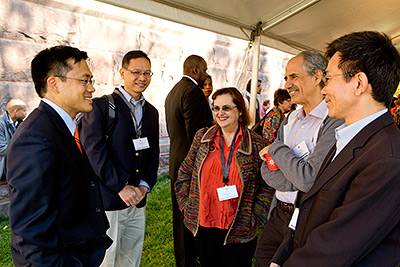 Provost David Lee (far left), a 1999 graduate alumnus, speaks with alumni after delivering remarks on the second day of the conference. (Photo by Denise Applewhite, Office of Communications)

Graduate students also play a critical role in their own research and their faculty advisers' research, and in teaching undergraduates, Eisgruber said. Building upon the connections that graduate alumni have with their departments, Eisgruber added, "I hope that this conference will also help to strengthen the ties that stretch across the different boundaries of the University."

Graduate alumni attendees represented 40 graduate departments and programs that grant master's and doctoral degrees; 17 countries; 32 U.S. states, as well as Washington, D.C.; and every decade since the 1950s. Many said they appreciated the University's attention to a segment of the University community smaller than the undergraduate student and alumni bodies.

At a reception at the School of Architecture Friday afternoon — one of dozens of departmental receptions — Callie Hancock chatted with alumni from other classes. The chance to reconnect with friends and to attend events focusing on campus architecture and climate change brought her back.

"A friend got me excited about coming back, and it's such a big event," said Hancock, who earned her master's in architecture in 1982. "The University is always improving its outreach. It's great, and I'm glad they're doing it." 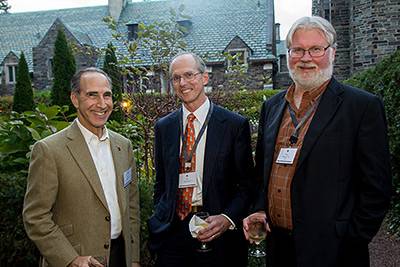 William Russel, dean of the Graduate School, welcomed graduate alumni on the first day of the conference with a festive reception at his home, Wyman House, at the Graduate College, built 100 years ago about half a mile west of the main campus.

"This weekend, by attending 'Many Minds, Many Stripes,' you are making history by celebrating the centennial of the Graduate College and, more importantly, the first Princeton conference for graduate alumni," he said. "I thank you for coming."

Current graduate students share their experiences with exams, research and student life with a roomful of graduate alumni in Richardson Auditorium. (Photo by Denise Applewhite, Office of Communications)

In his opening remarks, Provost David Lee, a 1999 graduate alumnus in economics, spoke warmly of his years as a graduate student — from the mentorship he received, to meeting his wife, a fellow graduate student. These memories guided his decision to join the faculty and become provost, he said.

"As graduate students, we were junior partners and apprentices in research at the frontiers of knowledge and in the teaching of undergraduates," Lee said. "This convening of talented faculty and graduate students forms the foundation for Princeton's claim to be a leading research university. My own experience as a graduate student engaging in the pursuit of knowledge at the highest levels of leading scholarship in the world was both exciting and a special privilege."

Eisgruber also recalled the personal significance that graduate students played in his time as a Princeton undergraduate. 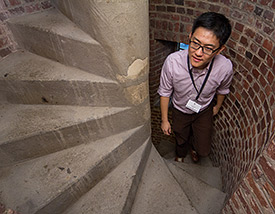 Yi Wang, a 2009 graduate alumnus, climbs the stairs of the 173-foot Cleveland Tower, a landmark at the Graduate College. (Photo by David Kelly Crow for the Office of Communications)

"I know that in my own undergraduate studies here now 30 years ago, I was inspired by and grateful for the mentoring of graduate students who were extraordinary teachers in my own life, several of whom I've kept in touch with throughout my career since then, including Will Harris of the graduate Class of '85 and Jim Fleming of the graduate Class of '88 who were teaching assistants in the constitutional interpretation course that changed my life," said Eisgruber, a 1983 alumnus and physics major who went on to become a constitutional scholar.

Eisgruber noted some of the improvements in graduate student life in recent years, such as greater inclusion in academic colloquia and increased financial support. Graduate alumni participation in the life of the University also has increased in recent years, he said.

"Today, the graduate program thrives at Princeton," he said.

In a question-and-answer period, queries covered a range of topics including: attacks on the value of the liberal arts, cuts in federal funding for scientific research, and preparation for careers outside academia, including entrepreneurial careers, as the academic job market offers limited opportunity.

Yi Wang, a 2009 graduate alumnus who had traveled from Shanghai, asked about outreach to international alumni, as about 38 percent of all graduate students were citizens of other countries in 2012-13. Eisgruber noted the 2012 Princeton-Fung Global Forum in Shanghai, which focused on "The Future of the City."

"One of the ways that we can help make sure these connections occur between the University and its alumni around the world after they graduate is to take some of what we do here at Princeton and push it abroad through the kind of events that the Fung Global Forum exemplifies," Eisgruber said. "It's designed to bring together our alumni thought leaders and academics and to nudge our faculty members to expand their horizons." 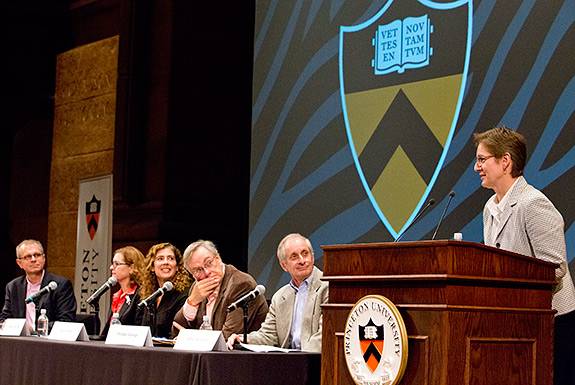 Princeton faculty members discuss the challenges of encouraging graduate students' broad curiosity and preparing them for the specific professional tasks ahead. (Photo by Denise Applewhite, Office of Communications)

Throughout the conference, talks and panels focused on the character of the Graduate School and graduate student life. Russel, who is in his final year as dean, outlined the progress in academic and student life since he took office in 2002.

In a panel discussion on graduate student life, students agreed that despite the heavy workload, they cherished the ability to pursue their own avenues of research, with the support of their advisers and peers.

"One thing that separates Princeton from other policy schools and other graduate schools is that people are really uncompetitive. I feel supported by my classmates," said Meghan O'Toole, a second-year Master in Public Affairs student.

In addition to academic support, students said they have many outlets to be involved with campus life. Josh Heyne, a fifth-year student in mechanical and aerospace engineering, commented on his work as a community associate for the Graduate School, organizing social and service events.

"Not only is it a unique opportunity to interact with very diverse, inspiring individuals, it's also a good outlet for stress that we all have as graduate students," said Heyne, who also is involved with APGA, the Pace Center for Civic Engagement and the cycling sport club. "The University is doing an excellent job providing graduate students the opportunity to get involved." 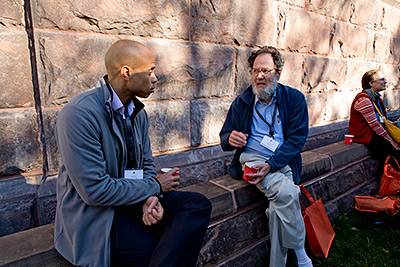 Coming back to campus offers alumni — such as Laurence Latimer (left), a 2001 graduate alumnus in public affairs, and Walter Blass (right), a 1952 graduate alumnus in economics — an opportunity to discuss common interests. (Photo by Denise Applewhite, Office of Communications)

On a panel about teaching and training graduate students, professors discussed some of the responsibilities they balanced: supporting students' curiosity, serving as results- and funding-driven lab directors, encouraging the development of professional skills, and guiding students toward research with enough practical application to help students gain employment.

"The most recent problem I find that many students have is how to transform themselves from consumers of research to producers of research," said Janet Currie, the Henry Putnam Professor of Economics and Public Affairs in the Woodrow Wilson School for Public and International Affairs and a 1988 graduate alumna. 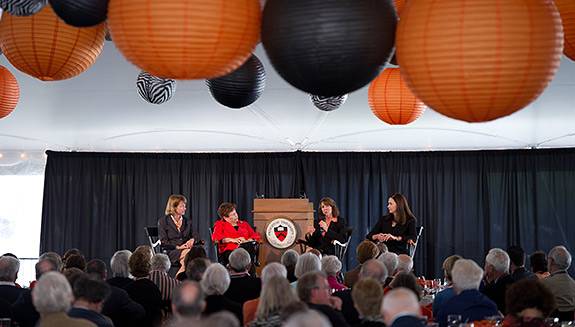 Engaging with many minds

Throughout the weekend, alumni caught up with friends, visited faculty mentors and forged new friendships.

Celebrating the Graduate College's 100th anniversary brought back fond memories for Kenneth Lund, who earned his Ph.D. in chemical engineering in 1963.

"I lived here, and I was the chair of the social committee," Lund said as he stood in Procter Hall, sharing stories with other alumni and current students. "This is where I met my future wife at a mixer."

For Zhen-hong Li, the conference allowed her to re-establish ties with the chemistry department, from which she received her Ph.D. in 1990.

"I saw the invitation and it looked nice and interesting, a specific gathering for graduate students," she said. "I met some old groupmates, and we all felt the same — I definitely think it's a very good idea."

"The school gave me a chance, and it fulfills me to come back," said Coles, director of global education and the Andrew Young Center for International Affairs at Morehouse College and former Africare president. 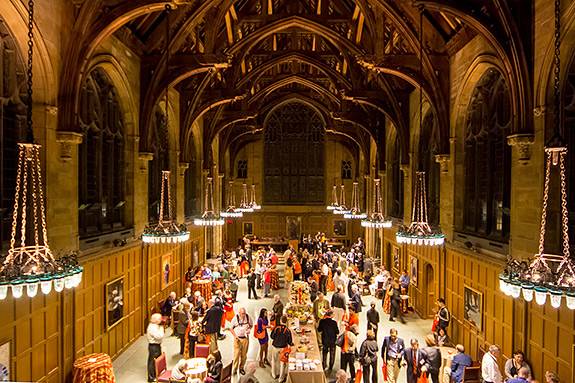 Graduate alumni connect with old and new friends at a reception at Procter Hall. (Photo by David Kelly Crow for the Office of Communications)

Ramdas, who earned her Master in Public Affairs in 1988 and works in New Delhi, gave the first keynote, focusing on gender inequality as a challenge facing both developed and developing countries. After offering examples related to violence against women, illiteracy, discrimination and cultural expectations about gender roles, Ramdas highlighted the role education can play in reducing gender inequality. 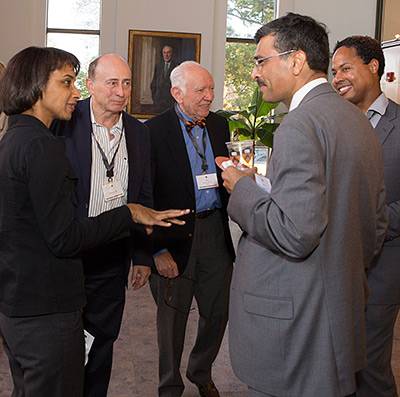 Cecilia Rouse (far left), dean of the Woodrow Wilson School of Public and International Affairs, mingles at a reception for Wilson School alumni, faculty and students. (Photo by Denise Applewhite, Office of Communications)

Ramdas concluded, "What we can do is try give back and make sure that many more generations of students, graduate or otherwise, can continue to have that kind of a legacy and that kind of an education in these hallowed halls, the way that we once did."

"They succeeded in organizing a first-rate conference with first-rate speakers," said Joseph Andose, who received his Ph.D. in chemistry in 1972. "I hope they do it again."

The "Many Minds, Many Stripes" website features more information, photos and a video about graduate students and alumni that was premiered at the conference; videos of many conference sessions will be posted in the coming weeks. 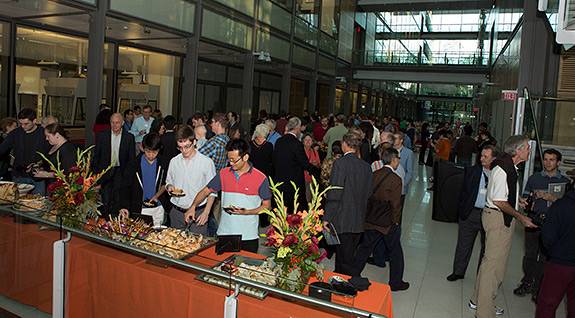 A reception hosted by the Department of Chemistry draws dozens of alumni, faculty and students to the Frick Chemistry Laboratory. (Photo by Denise Applewhite, Office of Communications)

For APGA president Tony Fiori, a 2003 graduate alumnus, individual conversations were the highlight of the conference. Fiori plans to work with the Alumni Association to continue to boost engagement by graduate alumni, and to connect them with volunteer opportunities, such as regional association, the APGA, and the Alumni Schools Committee.

"Many of these alumni hadn't been back to Old Nassau since they graduated. So it was awesome to hear their stories, welcome them back and make sure they know they are always welcome on campus," Fiori said. "I hope to see many of our graduate alumni at Alumni Day and Reunions." 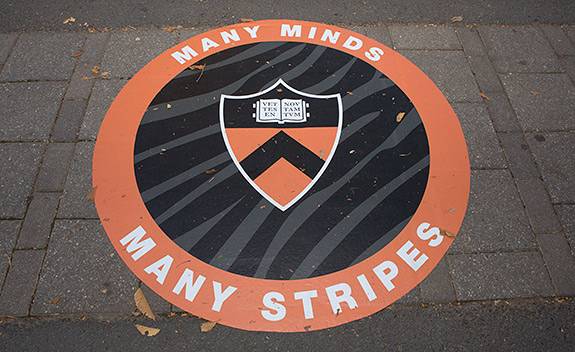 The logo for the "Many Minds, Many Stripes" conference adorns McCosh Walk to welcome graduate alumni back to campus. (Photo by Denise Applewhite, Office of Communications)