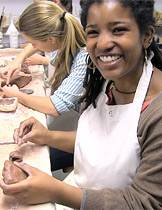 The Princeton University Art Museum since its founding in the late 1800s has aimed to provide students with exposure to original works of art and to teach the history of art through the many objects they have from around the world. Princeton University faculty members use objects in the museum as teaching tools to give students a deeper understanding of ancient cultures and people.

Last semester, Christina Halperin, then a Cotsen Fellow in Latin American Studies and now a lecturer in the art and archaeology department, taught a course titled "Mesoamerican Material Culture." In this video, students in the course study ancient Maya artifacts in the museum and then reproduce Mesoamerican pottery techniques in the Wilson College Ceramics Studio on campus.

Play the "Teaching With Objects in the Museum" video.

Bryan Just, the Peter Jay Sharp Curator and Lecturer in the Art of the Ancient Americas and also a lecturer in art and archaeology, worked with Halperin to identify original works of ancient Maya ceramics that they could examine firsthand.

The Maya examples included vessels, which may have been used to drink chocolate, and figurines. Some of the figurines were also wind instruments called "ocarinas" or were rattles and can be played today if handled carefully.

"It's a matter of making sure that we're using objects that are stable enough to handle without damaging them," Just said.

The experience of handling original objects was augmented with a subsequent trip to Princeton's ceramic studios in Wilson College, one of Princeton's residential colleges, where students were given the opportunity to recreate works of art using techniques similar to those used in ancient Mesoamerica. Some complex figures were sculpted by skilled artisans during that time, but some of the less complex figures were possibly made by children and simply pushed into molds to create their shapes.

"Trying to replicate certain techniques gives you a sense of the level of skill. … It gives you an appreciation for the producers of the past," Halperin said.

The museum, which also is open to the public with free admission, works with faculty from many departments to provide access to original objects. According to Just, this is to "show students what the original experience of interacting with such an object may have been."

"When one holds them, you establish a kind of personal connection," he said. "The tactile experience is central to the intent of the artist."