In research meant to highlight how the destruction of the Amazon rainforest could affect climate elsewhere, Princeton University-led researchers report that the total deforestation of the Amazon may significantly reduce rain and snowfall in the western United States, resulting in water and food shortages, and a greater risk of forest fires.

The researchers report in the Journal of Climate that an Amazon stripped bare could mean 20 percent less rain for the coastal Northwest and a 50 percent reduction in the Sierra Nevada snowpack, a crucial source of water for cities and farms in California. Previous research has shown that deforestation will likely produce dry air over the Amazon. Using high-resolution climate simulations, the researchers are the first to find that the atmosphere's normal weather-moving mechanics would create a ripple effect that would move that dry air directly over the western United States from December to February. 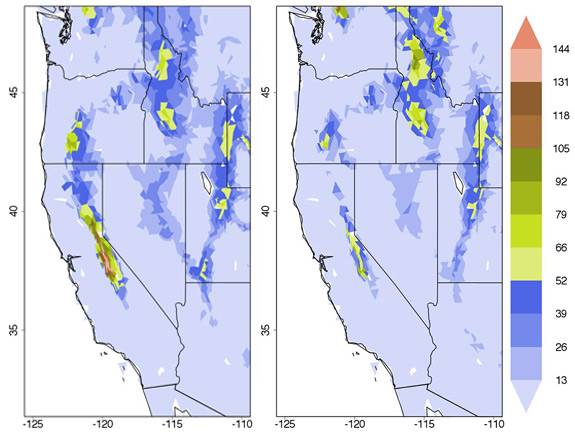 Princeton University-led researchers report that the total deforestation of the Amazon may significantly reduce rain and snowfall in the western United States, including a 50 percent reduction in the Sierra Nevada snowpack that is a crucial source of water for cities and farms in California. The simulation showed that the water equivalent of the snowpack by April 1 decreased in range and depth from pre-deforestation levels (left) when the Amazon was cleared (right). The depth is measured in centimeters with the redder areas indicating more snow. (All images by David Medvigy, Department of Geosciences)

Specifically, a denuded Amazon would develop a weather cycle consisting of abnormally dry air in the sun-scorched northern Amazon around the equator weighted by wetter air in the cooler south. Research has speculated that this pattern would be similar to the warm-water climate pattern El Niño, which during the winter months brings heavy precipitation to southern California and the Sierra Nevada region while drying out the Pacific Northwest.

The Princeton-led researchers found that the Amazon pattern would be subject to the same meandering high-altitude winds known as Rossby waves that distribute the El Niño system worldwide from its source over the Pacific Ocean. Rossby waves are instrumental forces in Earth's weather that move east or west across the planet, often capturing the weather of one region — such as chill Arctic air — and transporting it to another. Because the Amazon pattern forms several thousand miles to the southeast from El Niño, the researchers report, the Rossby waves that put the rainy side of El Niño over southern California would instead subject that region to the dry end of the Amazon pattern. The pattern's rainy portion would be over the Pacific Ocean south of Mexico.

Research suggests that deforestation will likely produce a weather cycle over the Amazon consisting of abnormally dry air in the sun-scorched northern Amazon around the equator weighted by wetter air in the cooler south (left). The Princeton-led researchers found that the Amazon pattern would be subject to meandering high-altitude winds known as Rossby waves that move east or west across the planet (center). The Rossby waves would move the dry end of the Amazon pattern directly over the western United States from December to February, while the pattern's rainy portion would be over the Pacific Ocean south of Mexico (right).

First author David Medvigy, an assistant professor of geosciences at Princeton, explained that the findings stand as one possible outcome of Amazon deforestation in regions outside of South America — consequences that scientists are working to understand. The rainforest influences various aspects of the surrounding climate, including cloud coverage, heat absorption and rainfall.

"The big point is that Amazon deforestation will not only affect the Amazon — it will not be contained. It will hit the atmosphere and the atmosphere will carry those responses," Medvigy said.

"It just so happens that one of the locations feeling that response will be one we care about most agriculturally," he said. "If you change the snowpack in the Sierra Nevada, where most of the irrigation for California's Central Valley comes from, then by this study deforestation of the Amazon could have serious consequences for the food supply of the United States." 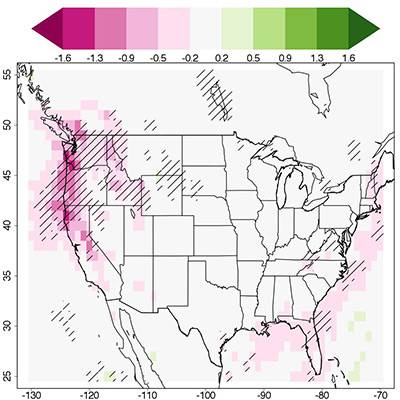 The researchers found that deforestation could mean 20 percent less rain for the coastal Northwest. The figure above shows the change (in millimeters per day) in daily average precipitation after total Amazon deforestation compared to before deforestation. The pink to dark-pink range indicates a drop in precipitation of up 1.6 mm less per day once the Amazon is gone. Areas with statistically significant changes are hatched.

Because the exact result of Amazon deforestation is impossible to know currently, the behavior and impact of El Niño provides one of the best ideas of how the loss of the Amazon could play out, Medvigy said. Studies have suggested since 1993 that an Amazon without trees will develop an El Niño-like pattern, the researchers reported. The researchers then focused on the northwestern United States because the region is typically sensitive to El Niño.

"We don't know what the world will be like without the Amazon. We know exactly what happens with El Niño — it's been studied extensively," Medvigy said. "Our intention with this paper was to identify an analogy between El Niño and Amazon deforestation. There's good reason to believe there will be strong climatic similarities between the two. Research like this will give us a handle on what to expect from Amazon deforestation."

Medvigy worked with second author Robert Walko, a senior scientist in the division of meteorology and physical oceanography at the University of Miami; Martin Otte, a postdoctoral fellow at the U.S. Environmental Protection Agency's Atmospheric Modeling and Analysis Division; and Roni Avissar, a University of Miami professor of meteorology and physical oceanography and dean of the Rosenstiel School of Marine and Atmospheric Science. 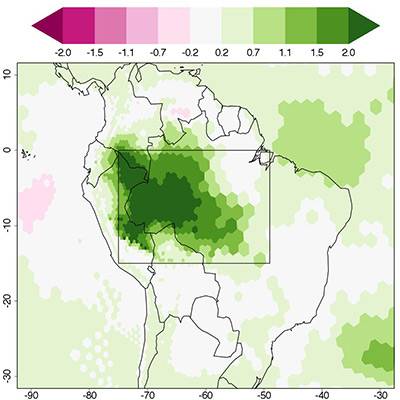 Deforestation will likely produce dry air over the Amazon. The researchers' model indicated that the surface temperature in the Amazon region would increase by up to 2 degrees Celsius (darkest green) over a 14-year period following deforestation. The region of Amazon deforestation is boxed.

The high resolution of the researchers' climate model allowed them to see the otherwise subtle pull of the Rossby waves, Medvigy said. The typical model buries finer atmospheric features under a scale of about 200 kilometers — twice the width of the Andes Mountains. Medvigy and his co-authors spotted the intricacies of the Amazon's future weather pattern using a resolution as fine as 25 kilometers, he said.

The researchers based their simulation on the Amazon's complete removal, an exaggerated level of destruction needed to produce a noticeable effect, Medvigy said. Nonetheless, clear-cutting of the Amazon marches on, although conservation efforts have significantly slowed deforestation in countries such as Brazil since the mid-2000s. In addition, research has shown that climate change, especially a spike in the global temperature, could wipe out as much as 85 percent of the forest.

The Amazon's fragility and vulnerability — combined with its outsized sway over the climate — add an urgency to better understanding how the forest's disappearance will affect the larger climate, particularly for agriculturally important areas such as California, Medvigy said.

"We know the Amazon is being deforested, but we don't know for sure what's going to happen because of it," Medvigy said. "Other scientists need to do these simulations and see if they get the same results. If they do, then policymakers will have to take notice."

The paper, "Simulated changes in Northwest US climate in response to Amazon deforestation," was published in the Nov. 15 edition of the Journal of Climate. This work was supported by awards from the National Science Foundation (grant numbers 1151102 and 0902197).