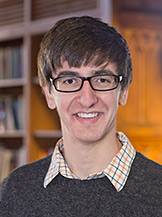 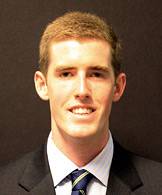 Princeton University senior Adam Mastroianni and Class of 2013 graduate Timothy McGinnis have been awarded Rhodes Scholarships for graduate study at the University of Oxford.

Mastroianni, a Monroeville, Ohio, native who is concentrating in psychology, plans to pursue an M.Phil. in evidence-based social intervention.

At Princeton, he has immersed himself in the study and performance of humor.

"Adam's senior thesis started in his sophomore year, when he walked into my office saying that he wanted to study humor," said Susan Fiske, the Eugene Higgins Professor of Psychology and Mastroianni's thesis adviser. "The thesis shows how people decide what's funny, based on the norms other people convey. Humor is a matter of taste, but especially shared taste.

"My only challenge in advising him is keeping up with him," Fiske continued. "Adam embodies all our shared values: academic achievement, modesty, service — and a great sense of humor."

As part of his extensive independent work in the psychology of humor, Mastroianni spent two summers in the lab of Daniel Gilbert at Harvard University, participating in research about social factors affecting humor.

Mastroianni received Princeton's Shapiro Prize for Academic Excellence in 2011 and 2012, as well as the Howard Crosby Warren Junior Prize from the Department of Psychology.

Mastroianni co-founded and co-hosted Princeton's first on-stage late-night talk show, for which he was awarded the Alberto Santos-Dumont Prize for Student Innovation in June. He is a senior member of the improvisational comedy group Quipfire!,; a senior cartoonist for the student newspaper the Daily Princetonian; and a writing coordinator and performer with the Princeton Triangle Club.

He also serves as a residential college adviser at Whitman College and is a Writing Center Outreach Fellow.

In his Rhodes application, Mastroianni wrote about how people's potential can be "blinded by the complex barriers they face … Humans possess a breathtaking array of unique intelligences, but life manufactures myriad situations that distort and obscure those abilities."

Mastroianni was the first student from his small rural high school to attend an Ivy League school. While at Princeton he co-founded LevelUp, a free college preparation service for his high school. He plans to expand this focus at Oxford, where, he wrote in his application, he "would identify the barriers high school students face in reaching their potential, and develop interventions to kick down those barriers with the righteous boot of the scientific method."

"I believe that people are smart in a million different ways, though their genius may often be buried," he said.

At Oxford, as at Princeton, Mastroianni intends to flex his humor talents outside the classroom, and hopes to join the Oxford Revue.

After the Rhodes, he plans to pursue a Ph.D. and develop college-preparedness programs.

McGinnis, of Charlotte, N.C., majored in anthropology. At Oxford, he plans to complete two master's degrees — an M.Sc. in history of science, medicine and technology the first year, studying the social history of medicine in Africa, and during his second year, an M.Sc. in global health sciences.

A member of Phi Beta Kappa, he was awarded the Department of Anthropology's senior thesis prize last year.

Currently, McGinnis is taking pre-med courses at Harvard University Extension School and is a research assistant for Wellbody Alliance, a nonprofit co-founded by Daniel Kelly, a 2003 Princeton graduate, that funds and operates a health care clinic in Sierra Leone. McGinnis is working with Wellbody's executive director Raphael Frankfurter, also a 2013 Princeton graduate, on fundraising initiatives. Earlier this month, McGinnis ran the New York City marathon for the first time, helping to raise more than $14,000.

During his time at Princeton, McGinnis served as a learning consultant in the McGraw Center for Teaching and Learning, was the senior defensive player of the club lacrosse team, and worked as an emergency medical technician in West Windsor, N.J.

In summer 2012, he worked on a medical anthropology project at Wellbody's clinic in Sierra Leone, under the supervision of Peter Locke, an associate professional specialist and lecturer in public and international affairs, Woodrow Wilson School of Public and International Affairs.

"I was struck not only by what a sensitive and insightful field researcher and anthropologist Tim is, but by the compassion, respect and humility with which he engaged people enduring difficult social and medical conditions," said Locke. "These qualities are certain to make him a visionary leader in the fields of global health and medical humanitarianism — and beyond."

McGinnis' thesis adviser, Carol Greenhouse, the Arthur W. Marks '19 Professor of Anthropology and chair of the Department of Anthropology, lauded McGinnis' "exceptionally long intellectual reach" as he integrated his volunteer experience into his thesis.

"His choice was to relate lessons learned in Sierra Leone to other dilemmas of care closer to home," Greenhouse said. "His thesis — elegantly conceived and exquisitely written — became an extended meditation on responsibility and friendship at the same time that it formulates an entirely new way to bring ethnographic inquiry to bear on an interconnected world."

Following his freshman year, McGinnis took a two-year leave from Princeton to attend Deep Springs College in Deep Springs Valley, Calif., where students run a largely self-sustaining agricultural community while also participating in policy and decision-making for the highly-selective school. He said the experience was "crucial to my educational experience and remains integral to who I am."

"He was one of the most critically aware students I've encountered; compassionate, pragmatic, wildly talented and grateful for every opportunity," said Justin Kim, a professor and former dean of Deep Springs.

In his Rhodes application, McGinnis wrote about his desire to pursue health care beyond traditional medical training. To help health care initiatives in developing countries succeed over the long term, wrote McGinnis, it is important to "draw on geopolitical and cross-cultural awareness [and] deeper historical appreciation."

After Oxford, he will likely pursue a medical degree in order to use clinical practice as a means to draw together the lines of anthropological, historical and comparative inquiry.

An interactive online conversation with the winners took place as a Google Hangout On Air on Nov. 26. Click here to watch and read a transcript.