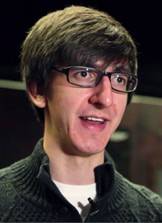 Rhodes Scholar and recent Princeton University graduate Adam Mastroianni talks about the psychology of humor, the subject of his senior thesis.

Adam Mastroianni is serious about humor. He graduated in June with a degree from Princeton's psychology department, where he wrote his senior thesis on the psychology of humor.

He started working on his topic while a sophomore when he found an adviser, Susan Fiske. Fiske, the Eugene Higgins Professor of Psychology, has said, "My only challenge in advising him is keeping up with him."

Mastroianni, a Rhodes Scholar, is heading to the University of Oxford to study evidence-based social intervention, pursuing his interest in developing college preparation programs.

Interested in humor since he was in high school, Mastroianni found many ways to explore the topic while at Princeton. He researched it for his thesis, joined the improv group "Quipfire!" and co-hosted a live late-night talk show on campus called "All-Nighter With David Drew." On the talk show, the hosts recently gave Princeton President Christopher L. Eisgruber — who learned of his Jewish heritage in adulthood — a mock bar mitzvah.

Mastroianni has studied topics such as whether it's possible to measure laughter or humor scientifically, the distinction between laughter (a behavior) and mirth (an emotion), and why humans laugh.

"Doing all these studies — some of them working, some of them not — and always regrouping after each study and kind of charting the next step, I think has been really formative in my life as a … what I hope to be, a future scholar," he said. "That has been really incredible."

'The Psychology of Humor'