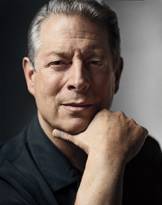 Former Vice President Al Gore has been selected to deliver the keynote address at the University's Class Day ceremony on Monday, June 2.

Class Day, which takes place the day before Princeton's Commencement, is an opportunity for seniors to publicly acknowledge achievements and contributions of members of the graduating class and University community.

In addition to the keynote address, the ceremony will include remarks by President Christopher L. Eisgruber and class members, the induction of honorary class members, and the recognition of class members for their contributions. The event is organized and presented by members of the graduating class.

"We admire Al Gore's tireless commitment to awakening the world to the challenge of climate change, and leading a global movement to solve it," said Class Day co-chair Taylor Francis. "We are thrilled that he will be sharing with us insights from his lifetime of leadership in Congress, the White House and as a private citizen."

"Before Al Gore, combating climate change was an issue considered by academics alone. Now, it's a generational calling that will define the 21st century," said Class Day co-chair Teddy Schleifer. "If Princeton seniors are looking for an example of how to change the way we talk about the world, all they need to do is listen closely this Class Day."

"Al Gore exemplifies how public service can have a concrete and enduring impact in our world," said Class Day co-chair Alisa Tiwari. "His dedication to solving the challenges that face our generation is inspiring. As we celebrate our accomplishments here at Princeton, we are excited to be joined by a leader with unique insight into how we can lead meaningful lives after graduation."

Gore is cofounder and chairman of Generation Investment Management. He is a senior partner at Kleiner Perkins Caufield & Byers, and a member of the board of directors at Apple Inc. Gore dedicates most of his time to serving as chairman of The Climate Reality Project, a nonprofit devoted to solving the climate crisis.

Gore was awarded the 2007 Nobel Peace Prize jointly with the Intergovernmental Panel on Climate Change. He is the author of "Earth in the Balance," "An Inconvenient Truth," "The Assault on Reason," "Our Choice: A Plan to Solve the Climate Crisis," and most recently, "The Future: Six Drivers of Global Change." He is also the subject of the 2006 Academy Award-winning documentary "An Inconvenient Truth."