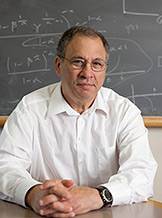 Simon Levin, the George M. Moffett Professor of Biology at Princeton University, has been awarded the 2014 Tyler Prize for Environmental Achievement for bridging ecological research and environmental policy, economics and social science.

Levin will receive an award of $200,000 with the prize, which was established in 1973 at the founding of the environmental movement and is awarded by the international Tyler Prize Executive Committee with the administrative support of the University of Southern California. Levin will receive the prize at a ceremony April 25 in Los Angeles.

Levin, whose research has revealed the multifaceted relationships between species and ecosystems, has played a foundational role shaping environmental policy and advancing the study of complex ecosystems, according to the Tyler Prize Executive Committee.

"What is so impressive about Simon Levin and his work is that he is a connector," said Owen Lind, chair of the committee and professor of biology at Baylor University. "His work has bridged the theoretical with the work of ecologists in the field, and connected complex ecological systems to social science and environmental and public policy. It is rare to see one expert have such a dramatic impact on so many fields."

Levin's work on theoretical ecology — ecology based on mathematical modeling — has helped to put environmental research into context and to provide a "big picture" for understanding our world.

He has shed new light on the interactions among groups of plants and animals living together, their impact on the environment, and the interplay of ecosystems such as forests, oceans and tidal zones. His research has generated new understanding of evolution and the origins of biodiversity, leading to improved management of natural resources such as forests and fisheries, and enhanced environmental policies.

"I started as a mathematician who wanted to use math to make the world a better place," said Levin. "Environmental degradation was a huge concern for me. Eventually, I realized the complexity we see in nature can offer incredibly valuable lessons for more than individual environmental problems; this work also translates to everything from the relationships among banks to the prospects of international collaboration to addressing climate change. I've never been satisfied focusing on one topic, so I love being able to jump back and forth between big problems."

Levin earned his Ph.D. in mathematics in 1964 from the University of Maryland-College Park and taught at Cornell University. After joining the faculty at Princeton in 1992, he became the founding director of the Princeton Environmental Institute (PEI) and director of its Center for BioComplexity.

"For over 40 years Simon Levin has been the leading figure at the interface of environmental science and mathematics," said current PEI director Stephen Pacala, the Frederick D. Petrie Professor in Ecology and Evolutionary Biology. "His work has armed a generation of policymakers with new ideas and tools that, today, form much of the basis of practical ecosystem management."

Levin's research has appeared in more than 500 articles and books.

"The fascinating thing about Simon's work is that it looks at the dynamics of complex systems and applies that not just to ecosystems and the biodiversity within the them, but also to human social systems, economic systems, virtually any kind of system," said Thomas Lovejoy, professor in the College of Science at George Mason University.

"At the same time," said Lovejoy, "he has mentored many students who are leaving their own mark on environmental science and making the world a better place."

"One of the fundamental challenges we face is how to build will and cooperation to protect our shared global resources; we all benefit from common goods that no one person or country owns, like clean air and a healthy environment, but it takes international cooperation to maintain these," said Levin. "We can learn a lot about how individuals cooperate, how leadership occurs, and even why individuals assume different roles in society, by looking to something as far-removed as a slime mold or a school of fish.

"But we can't stop there; we need to build models that go beyond analogies to the specifics of human decision-making to assure a sustainable future for our children and grandchildren."