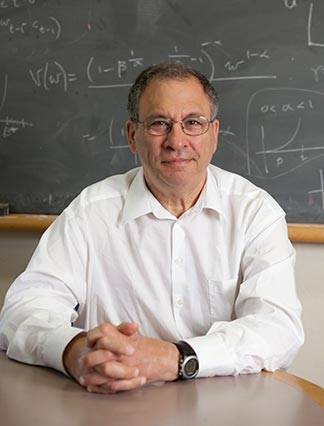 Simon Levin, Princeton University's George M. Moffett Professor of Biology and professor of ecology and evolutionary biology, will receive a National Medal of Science, the nation's highest scientific honor. Levin will be honored at a White House ceremony in early 2016 along with eight fellow Medal of Science recipients and eight recipients of the National Medal of Technology and Innovation.

"One never expects such things, which makes them all the more gratifying when they do come," Levin said. "For me, this recognition is the epitome. What could be better than recognition in one's own country and from one's own country? Princeton has been a wonderful environment that has given me unlimited opportunity to pursue the research that the medal rewards."

Levin focuses his research on complexity, particulary how large-scale patterns — such as at the ecosystem level — are maintained by small-scale behavioral and evolutionary factors at the level of individual organisms. His work uses observational data and mathematical models to explore topics such as biological diversity, the evolution of structure and organization, and the management of public goods and shared resources. While primarily related to ecology, Levin's work also has analyzed conservation, financial and economic systems, and the dynamics of infectious diseases and antibiotic resistance.

Lars Hedin, professor and chair of ecology and evolutionary biology, said that Levin's work has shaped how scientists consider the larger implications of local factors.

"The award is well-deserved and reflects Simon's exceptional contributions to knowledge in ecology and evolutionary biology," Hedin said. "His work on ecological theory and on how macroscopic patterns emerge from local interactions among organisms has influenced a generation of scientists, and is continuing to influence the way we think about biodiversity, complexity and human agency in a world that is undergoing rapid environmental change."

Daniel Rubenstein, Princeton's Class of 1877 Professor of Zoology and professor of ecology and evolutionary biology, said that Levin is among "the towering figures who brought simple math to bear on ecology to reorganize and shape thinking and project design." This work transformed ecology from a largely measurement-based and descriptive science into one that is conceptual, said Rubenstein, who was department chair from 1991 to 2014 and has often collaborated with Levin.

"Simon Levin is truly an amazing person and scientist. He helped transform the field of ecology by using theory to frame and crystalize problems and his ability to listen and learn from empiricists made his work compelling and relevant," Rubenstein said.

"His work reaches across scales just as he reaches across fields and disciplines," he continued. "As chair for most of his time at Princeton, I always marveled at the way he connected people and ideas, mentored graduate students and postdocs, and the way he empowered math-phobic students to harness the power of theory to enrich their theses."

Levin joined Princeton's faculty from Cornell University in 1992. He has received numerous awards throughout his career, including the Tyler Prize for Environmental Achievement in 2014; the Ecological Society of America's Eminent Ecologist Award in 2010; and the 2005 Kyoto Prize in Biological Sciences from the Inomori Foundation of Japan. Levin is a member of numerous national and international honorary societies, including the American Academy of Arts and Sciences (1992) and the National Academy of Sciences (2000).

Levin's award brings to 21 the number of Princeton faculty members who have received the National Medal of Science.