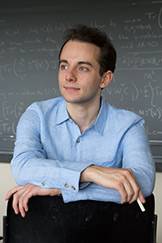 Princeton mathemathics major Alexander Iriza, the salutatorian of the Class of 2014, will continue the tradition of giving a speech in Latin at the Commencement ceremony June 3.

While Princeton senior Alexander Iriza, of Astoria, New York, credits his parents for sparking his interest in math — his mother gave him math workbooks when he was a toddler — that was merely "a nudge" in the right direction.

"I felt like my interests developed organically from there," he said. "It was initiated by them but I was self-motivated. I remember that instead of hanging out with my friends, I would want to go to the basement and do addition problems in my math book. I was a bit of a strange kid."

Iriza's dedication to the study of math at Princeton as well as his exceptional scholarship led to his being named salutatorian for the Class of 2014. Iriza will continue the University tradition of delivering a speech in Latin at Commencement on Tuesday, June 3. Princeton's first Commencement, held in 1748, was conducted entirely in Latin.

In addition to concentrating in math, Iriza is pursuing certificates in applied and computational mathematics and applications of computing. He has taken 10 computer science courses during his time at Princeton.

His academic accolades include sharing the Class of 1939 Princeton Scholar Award with Katherine Pogrebniak, the valedictorian of the Class of 2014. Named to Phi Beta Kappa last fall, Iriza also received the Andrew H. Brown Prize as the outstanding junior in mathematics, the Manfred Pyka Memorial Prize in Physics and the Shapiro Prize for Academic Excellence twice.

The study of math as well as Latin dominated Iriza's experience at the Dalton School in New York City, which he attended from kindergarten through 12th grade. 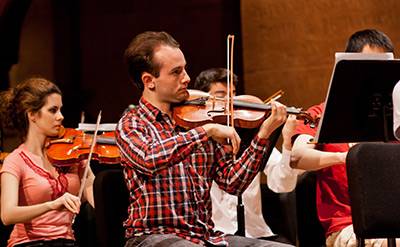 Music has played a central role in Iriza's Princeton experience. A violinist with the Princeton Sinfonia, he said he loves performing in an ensemble and that music offers a different kind of challenge from studying math. (Photo by Lilia Xie '14)

Iriza's father, who owns Nocello, an Italian restaurant in the theater district in New York, and his mother thought Spanish would be practical for their son. Iriza began studying Spanish in fifth grade. However, a fascination with Roman history sparked his interest in Latin, which he started studying in ninth grade. In 2010, Iriza earned a perfect score on the National Latin Exam and a bronze medal at the International Olympiad in Linguistics. Iriza currently is learning Romanian; his father is a native of Romania, and the family travels there often to visit relatives.

One of those competitions, the Princeton University Mathematics Competition for high school students, brought Iriza to campus as a contestant. "I was inspired by the brilliant students I met, and I basically fell in love with the place," he said. While at Princeton, he has helped run that competition as well as another he competed in during high school, the North American Computational Linguistics Olympiad, in which students solve linguistic puzzles while exercising logic skills.

"Alex strikes me as one of the most gifted students that I have ever met," said Amit Singer, a professor of mathematics and the Program in Applied and Computational Mathematics. In his junior year, Iriza took Singer's graduate-level course "Mathematical Analysis of Massive Data Sets" and was the only student to earn an A+.

Last summer, Singer supervised Iriza on an independent research project with applications in cryo-electron microscopy. In biology, Iriza said, "it's important to understand the shape of molecules because this governs how they interact with other molecules." However, the process of 3-D reconstruction of a molecule — made up of 2-D images taken from many different angles by an electron microscope — can create visual "noise." To address this issue, Iriza worked "to develop an algorithm that runs fast and recovers an approximate reconstruction of the molecule," he said.

Singer said Iriza's results "will most certainly be the core of a future journal publication."

"It is not just that Alex's research skills are easily compared with even our top graduate students," Singer said. "He is extremely sharp, imaginative, quick, motivated, independent, scientifically curious and overall a student who is a pure joy to work with."

For his senior thesis, Iriza worked with Yannis Kevrekidis, the Pomeroy and Betty Perry Smith Professor in Engineering, a professor of chemical and biological engineering, and a professor in the Program in Applied and Computational Mathematics, to examine specific data analysis techniques.

"The idea is to start with a dynamical system of many particles that interact with each other on the microscopic level," Iriza explained. "It's believed that many animal species in the wild operate in this way, with each organism having its own personal preferences but also reacting to the individuals in its vicinity. Then we seek to understand the often beautiful and complex behavior that emerges at the macroscopic level of the entire flock."

Much of Iriza's thesis research required mastery of techniques, components and algorithms that Kevrekidis described as "hot off the press," and he noted the "lightning speed" with which Iriza critically explored the current literature and applied it to his thesis problem.

Comparing the maturity and depth of Iriza's work to that of a strong graduate student, or even a postdoc or colleague, Kevrekidis said: "His intellectual strength, his work ethic, his joy in discovery and thinking, his own vision about research directions single him out among the wonderful students I have had the good fortune to work with in my 28 years in Princeton. I truly look forward to finding out what he will accomplish in his research life."

Finding inspiration through altruism and music

Outside of the math department, Iriza's favorite class was "Practical Ethics," taught by Peter Singer, the Ira W. Decamp Professor of Bioethics in the University Center for Human Values.

"Professor Singer analyzes ethics from a consequentialist and logical point of view, and this almost mathematical perspective really resonated with me," Iriza said.

One of the topics in Singer's class was cost-effective altruism, a concept Iriza was already familiar with as a member of Giving What We Can, a global society whose members pledge to donate at least 10 percent of their income for life to the most cost-effective charities, for example, bed nets in mosquito-infested parts of Africa. Iriza has already started giving with income he has earned from paid internships.

Music has also played a defining role in Iriza's Princeton experience. He listens to classical music when he studies — usually something by Mendelssohn or Saint-Saëns, his favorite composers.

Iriza began studying violin at age 6 and has been a member of Princeton University Sinfonia since his sophomore year. He said playing music lets him take his mind off math and offers a different kind of challenge. "You have to constantly be paying attention and watching for change in the tempo and rhythm and volume of the piece," he said.

Iriza said he loves performing and playing with others in the ensemble. "My favorite memory from Sinfonia was getting to play the fourth movement of Mahler's Fifth Symphony, which I've always thought to be one of the most sublime pieces of orchestral music ever written."

After graduation, Iriza will spend the summer as a software development intern at Pure Storage, a startup in Mountain View, California. He would like eventually to work in industry and will return to Princeton in the fall to purse a master's in computer science.

Iriza said his most rewarding moment at Princeton was the opportunity to present his summer research results during the applied math certificate seminar last month. "Often when you're doing math research, you're one of only a few people in the world thinking about a particular problem," he said. "Once you get results, it's a really great experience to be able to share them with other people."