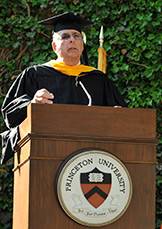 Photo by Mark Czajkowski for the Office of Communications

"With your new degree each of you is exceedingly well prepared to address both the challenges and opportunities that await you," Norman Augustine told advanced-degree candidates Monday, June 2, at the Princeton University Graduate School Hooding ceremony.

Augustine, a retired chairman and CEO of Lockheed Martin Corporation and former member of the Princeton faculty and of the Board of Trustees, emphasized the role of courage in shaping one's life pursuits. The first in his family to attend college, Augustine earned his bachelor's and master's degrees in aeronautical engineering from Princeton in 1957 and 1959, respectively.

"I would note that even in pursuing a career one must be willing to move out of one's comfort zone," he said in the ceremony's keynote address on Cannon Green. "Life is not a spectator sport. Neither is it a dress rehearsal. The greatest regrets in life are not the opportunities one pursues and fails, but are the opportunities one fails to pursue. As a friend of mine likes to remind us, 'When opportunity knocks, try to answer the door!'" 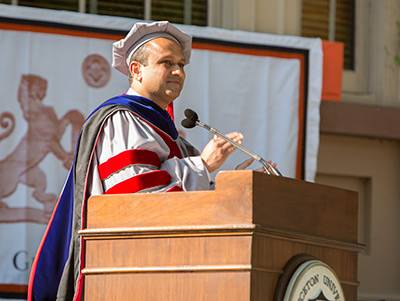 Sanjeev Kulkarni, the new dean of the Graduate School, applauds the masters' and doctoral candidates at the Hooding ceremony. (Photo by Amaris Hardy, Office of Communications)

Augustine addressed nearly 1,000 graduate students accompanied by their families and friends. The warmth of the late afternoon sun illuminated the students' traditional gowns and hoods, belying their less glamorous origins — a heavy woolen gown and hood being necessities in the cold halls of medieval European universities. Each hood is bordered by a velvet band in the color assigned to the academic discipline in which the degree is granted, and the lining bears the degree-granting university's own colors — at Princeton, orange with a black chevron.

Augustine spoke with humor and candor as he offered congratulations. "When I told my wife I had been asked to speak on such an auspicious occasion as we celebrate today and what I should say, she responded — a tribute to our 52 years of marriage — 'Well, whatever you do, don't try to sound clever or intellectual or charming … just be yourself!'"

He told the students they were about to enter a "world unlike any that has ever been known before."

"Your presence here today implies that you are equipped not only to play a leadership role in shaping this new world but that you have an obligation to do so," said Augustine, who earned an honorary degree from Princeton in 2007 and served as a featured speaker at Princeton's first graduate alumni conference, "Many Minds, Many Stripes," in 2013. 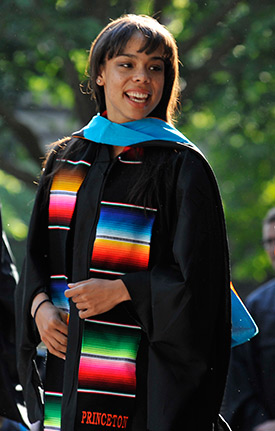 Pierina Sanchez, a master's candidate in public affairs, receives her hood. (Photo by Mark Czajkowski for the Office of Communications)

Augustine, who served as chairman and principal officer of the American Red Cross for nine years, spoke of the value of service to others, echoing Princeton's informal motto, "In the nation's service, and in the service of all nations."

"I would also note that if you engage in service outside of your professional responsibilities you will find much greater satisfaction in life," he said, relaying a story of a newly retired colleague who began volunteering for the Red Cross — at Augustine's suggestion — and discovered he truly enjoyed it.

The ceremony began with welcoming remarks from Sanjeev Kulkarni, dean of the Graduate School, and President Christopher L. Eisgruber.

Eisgruber commended the candidates for their "extraordinary effort and achievement" and reminded them that they join the legacy of another remarkable student from Princeton's storied past.

"Most of you probably know already that Princeton’s first graduate student was the fourth president of the United States, James Madison, who in 1771 stayed at Princeton to study Hebrew and philosophy after completing his undergraduate degree," Eisgruber said. He noted that it wasn't until more than a century later that the University formally conferred its first doctoral degree in 1879. The Graduate School was established in 1900.

Eisgruber expressed his admiration for Augustine — who was honored in May with a U.S. News STEM Leadership Hall of Fame Award for advancing science, technology, engineering and math (STEM) education and workforce preparation — as "one of this country's most persistent and persuasive advocates for investment in research and higher education" and invited the students to follow in his footsteps.

"I hope that, whatever you do and wherever your career takes you, you will find ways to communicate the value of scholarship, research and teaching to the broader public," Eisgruber said. 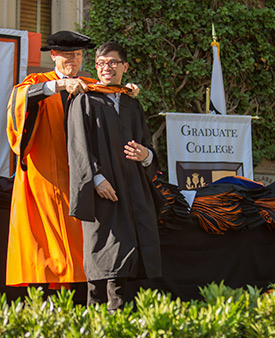 The 996 graduate degrees granted during the academic year were:

Advanced-degree recipients will be awarded their degrees at Princeton's 267th Commencement on Tuesday, June 3.

Following the presentation of doctoral candidates, the ceremony concluded with greetings for the new graduate students from Anthony Fiori *03, Woodrow Wilson School of Public and International Affairs, and president of the Association of Princeton Graduate Alumni.

The Hooding ceremony will be available for later viewing online. End-of-the-year activities began with the Baccalaureate service on Sunday, June 1, and Class Day, June 2. Graduation activities conclude with Commencement at 11 a.m. Tuesday, June 3, on the lawn in front of Nassau Hall. 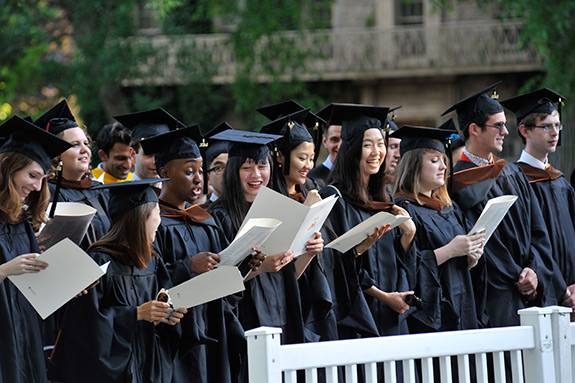 Nearly 1,000 graduate students accompanied by their families and friends participated in the ceremony on a sunny afternoon. (Photo by Mark Czajkowski for the Office of Communications)