Rain clouds could not dampen the excitement and pride of advanced-degree recipients and their supporters who gathered Monday, June 1, for the Princeton University Graduate School Hooding ceremony.

"Your presence here today is proof of genuine scholarly excellence," Princeton President Christopher L. Eisgruber said. "I am delighted to be with you today for this special and personal ceremony, which recognizes the extraordinary effort and achievement required to earn a graduate degree from Princeton University." 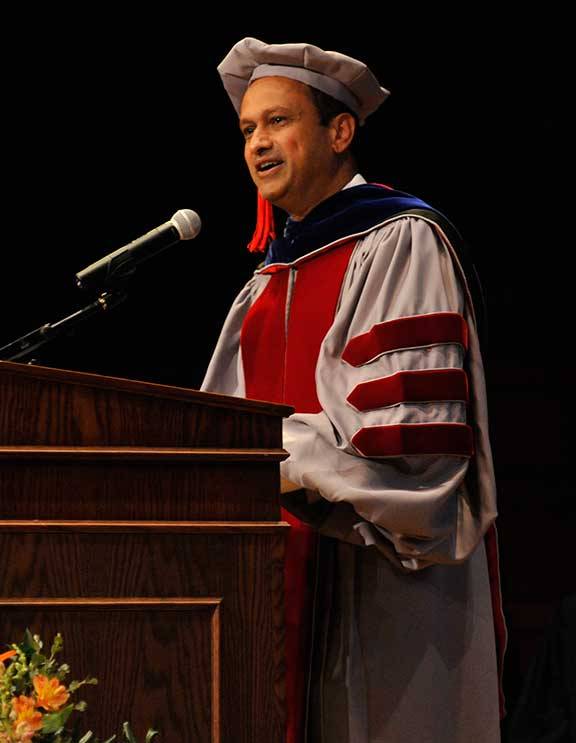 Dean of the Graduate School Sanjeev Kulkarni established the tone of the Princeton University Graduate School Hooding ceremony as one of mutual celebration for doctoral and master's degree recipients and the many people who have helped them. (Photos by Mark Czajkowski for the Office of Communications)

Sanjeev Kulkarni, Dean of the Graduate School and a professor of electrical engineering, established the tone of the ceremony as one of mutual celebration for doctoral and master's degree recipients and the many people who helped them complete the difficult journey to their degrees. At Kulkarni's urging to give "thanks and recognition for those who helped get them here," the advanced-degree recipients cheered and applauded their advisers, colleagues, University staff, family and friends.

Fitting for the weather that had forced the festivities from Cannon Green into Alexander Hall's Richardson Auditorium, the advanced-degree hood originated from the heavy woolen gown and hood being necessities in the cold halls of medieval European universities. Each hood is bordered by a velvet band in the color assigned to the academic discipline in which the degree is granted, and the lining bears the degree-granting university's own colors — at Princeton, orange with a black chevron.

"Their presence and participation reminds us that the complex journey to an advanced degree is made possible only with the continued encouragement, guidance and support of dedicated faculty," Kulkarni said of the 85 Princeton faculty members that candidates chose to have hood them. 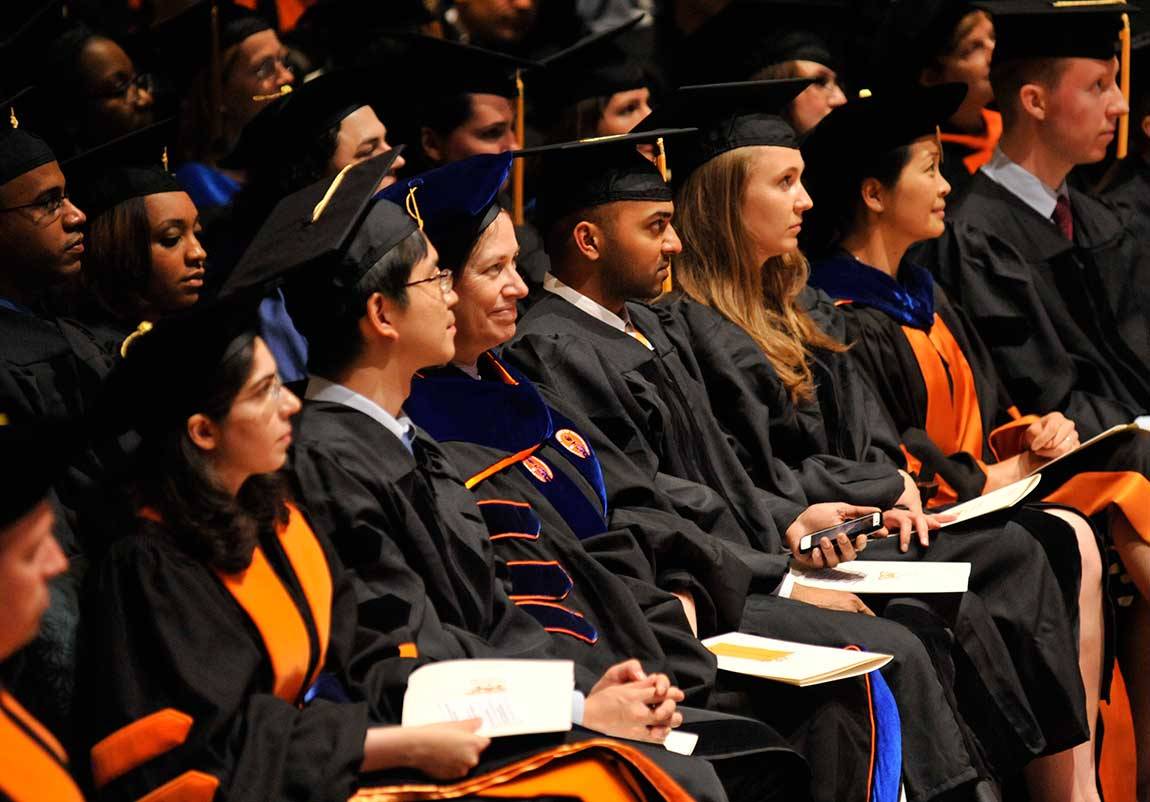 A symbol of scholarship, the advanced-degree hood originated from the heavy woolen gown and hood being necessities in the cold halls of medieval European universities. Each hood is bordered by a velvet band in the color assigned to the academic discipline in which the degree is granted, and the lining bears the degree-granting university's own colors — at Princeton, orange with a black chevron. The event is one of excitement and pride for recipients and faculty such as Emily Carter (center), the Gerhard R. Andlinger Professor in Energy and the Environment, and a professor of mechanical and aerospace engineering and applied and computational mathematics.

Members of the graduate class of 2015 described their decision to be hooded by their adviser as one intended to honor what can be years of working closely together, a time during which a faculty member guides an aspiring scholar through their evolution from a student to a future colleague.

"Without his covering, I'm neither the scholar nor the person that I am today. It's only fitting that he usher me out," Granby said.

"Professor Glaude has been everything I might've hoped for in an adviser," he said. "He's given me the freedom to discover my own voice, while also providing the discipline and structure I needed. He has graciously offered his time and freely placed his confidence in me."

Glaude also encouraged him to see institutions of higher education as testing grounds and forces for social change and resolution, Granby said. "[He] taught me that ideals are to be realized, not simply imagined," Granby said. "He taught me to see the transformation of academic institutions as integral to the work itself. Scholarship ought to be a way of engaging the complexities of our world, not avoiding them." 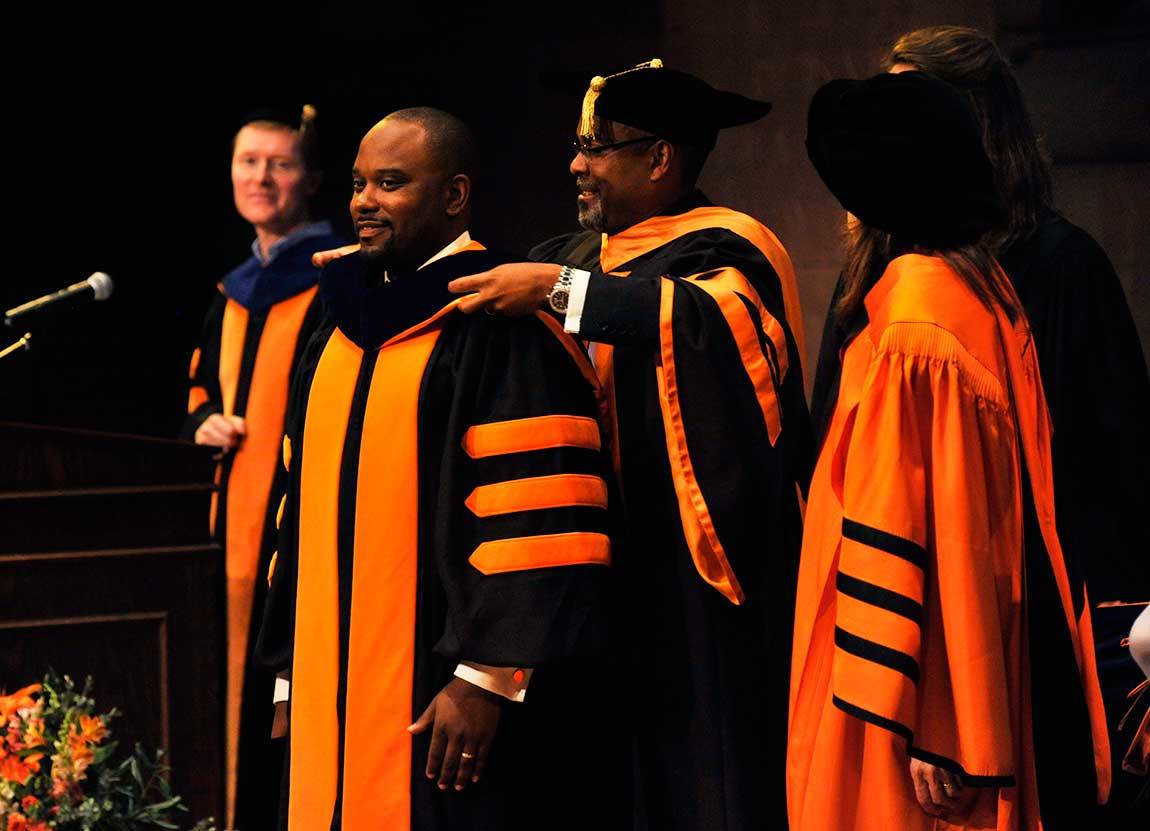 More than 100 advanced-degree recipients took advantage of the option to be hooded by their adviser, which this year was offered for the first time. Clifton Granby (front center) was hooded by his adviser, Eddie Glaude (rear center), the William S. Tod Professor of Religion and African American Studies and chair of the Center for African American Studies, whose support and guidance has shaped him as a scholar.

Yanilda González, who received her Ph.D. in politics and social policy, said that she found the strength to overcome academic and personal obstacles from her adviser, Deborah Yashar, a professor of politics and international affairs in the Woodrow Wilson School of Public and International Affairs. For instance, early in her time at Princeton, González, whose family emigrated from the Dominican Republic, felt out of place.

"I and many of my classmates from low-income backgrounds suffered from a serious case of impostor syndrome, feeling that we simply did not belong in a Ph.D. program," González said. "Deborah was a welcoming and encouraging voice from the start, always letting me know that I had something important to contribute to the conversation."

Later, when González feared that her dissertation on community-involved police reform in Latin America would be seen as insignificant, Yashar shared her experience of pursuing her research interests in the face of doubt, and producing work that would later become well known in the field.

"Deborah has been an excellent mentor and friend, offering invaluable guidance and advice even after I defended my dissertation. I therefore consider it an incredible opportunity and an honor to be hooded by her," González said. "I want to emulate Deborah in being the type of scholar that is able to find value and meaning in a wide range of ideas and approaches while also challenging my colleagues, students and myself to tackle the difficult questions." 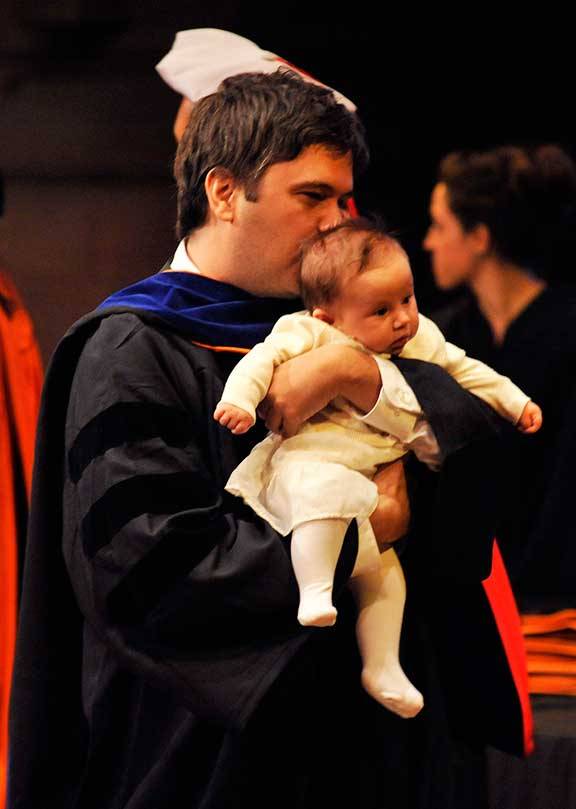 Although rainy weather pushed families to nearby simulcast centers, Mariano Somale, who is receiving his doctorate in economics, received his hood with his daughter, Isabella, in tow.

Mazhar Ali, who received his doctorate in chemistry and materials science, described how his adviser, Robert Cava, the Russell Wellman Moore Professor of Chemistry, encouraged him as he navigated the many complexities of a researcher's life. For instance, in preparing a paper published in October in the journal Nature, Ali was bombarded by the critiques of reviewers, the rigorous analysis and re-analysis of data, and the balancing of input from numerous co-authors. These factors can overwhelm a researcher at the beginning of his career, Ali said.

"Where other professors might have either gotten mad at the graduate student for mistakes during all of this — and I definitely made several! — or just left them to deal with it all on his own, Professor Cava helped me and, most importantly, taught me how to deal with all of the problems," Ali said. "These were things far outside of science and really shows the role of a true adviser.

"From him I have learned to think by analogy, not be afraid of taking scientific risks and how to keep your eye on the prize and sniff out what really matters," he said. "I see [Hooding] as a sort of recognition, not just from the school, but also from him that I have come into my own."

Lainie Fefferman, who is receiving her Ph.D. in music composition, elected to have her father, Charles Fefferman, the Herbert E. Jones Jr. '43 University Professor of Mathematics, present her hood as it was his love of music that inspired her path.

The final chapters of Fefferman's dissertation examined recordings of the song cycle "Winterreise" by Austrian composer Franz Schubert, which was a beloved collection of her father's during her childhood. Recollections of him singing along to a recording of the song cycle are "a treasured memory that kept me going through many long workdays," she said.

"Growing up, my dad showed me a passion for beautiful albums even before I knew I had any myself," said Fefferman, whose adviser was Paul Lansky, the William Shubael Conant Professor, Emeritus.

"My dad is a huge appreciator of beauty — in the elegance of good math and in the aesthetics of the world around him," she said. "It is that aestheticizing of the world and that love of beauty I carry with me always, and it is one of the biggest ingredients in my voice as a composer. Strong, simple ideas — they're my passion now thanks to my lovely dad." 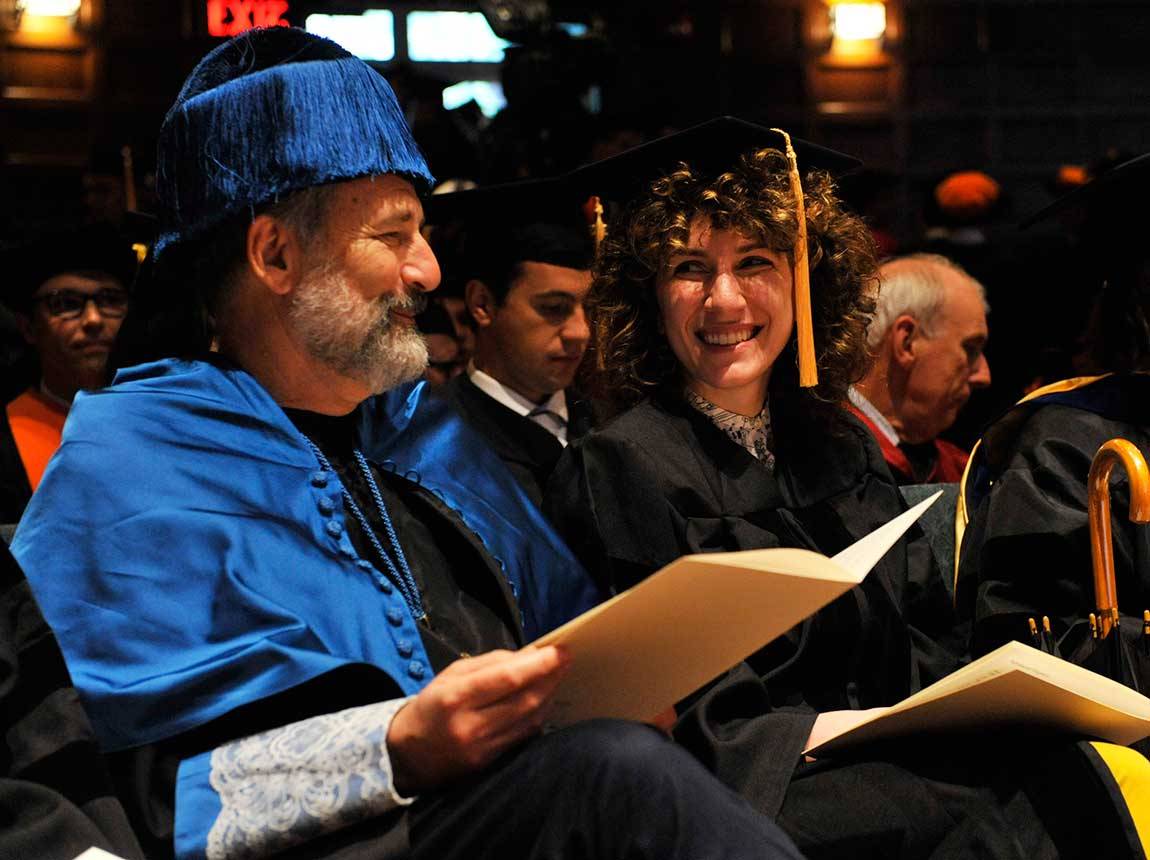 Lainie Fefferman (right), who is receiving her Ph.D. in music composition, elected to have her father, Charles Fefferman (left), the Herbert E. Jones Jr. '43 University Professor of Mathematics, present her hood as it was his love of music that provided inspiration and encouragement during her studies.

Advanced-degree recipients will be awarded their degrees at Princeton's 268th Commencement on Tuesday, June 2. The 885 graduate degrees granted during the academic year were:

Eisgruber encouraged the latest class of Princeton doctoral and master's degree holders to impart their success and knowledge to the nation and the University.

"I hope that you, as graduate alumni, remain involved with the life of the University so that we can benefit from your perspectives and talents. I hope that you will remain connected to your mentors and peers from your years here and that you will engage with future generations of students who carry on the tradition of graduate study at Princeton," Eisgruber said.

"I know that you all share a deep appreciation for the importance of advanced learning," he said. "I hope that, whatever you do and wherever your career takes you, you will find ways to communicate the value of scholarship, research and teaching to the broader public." 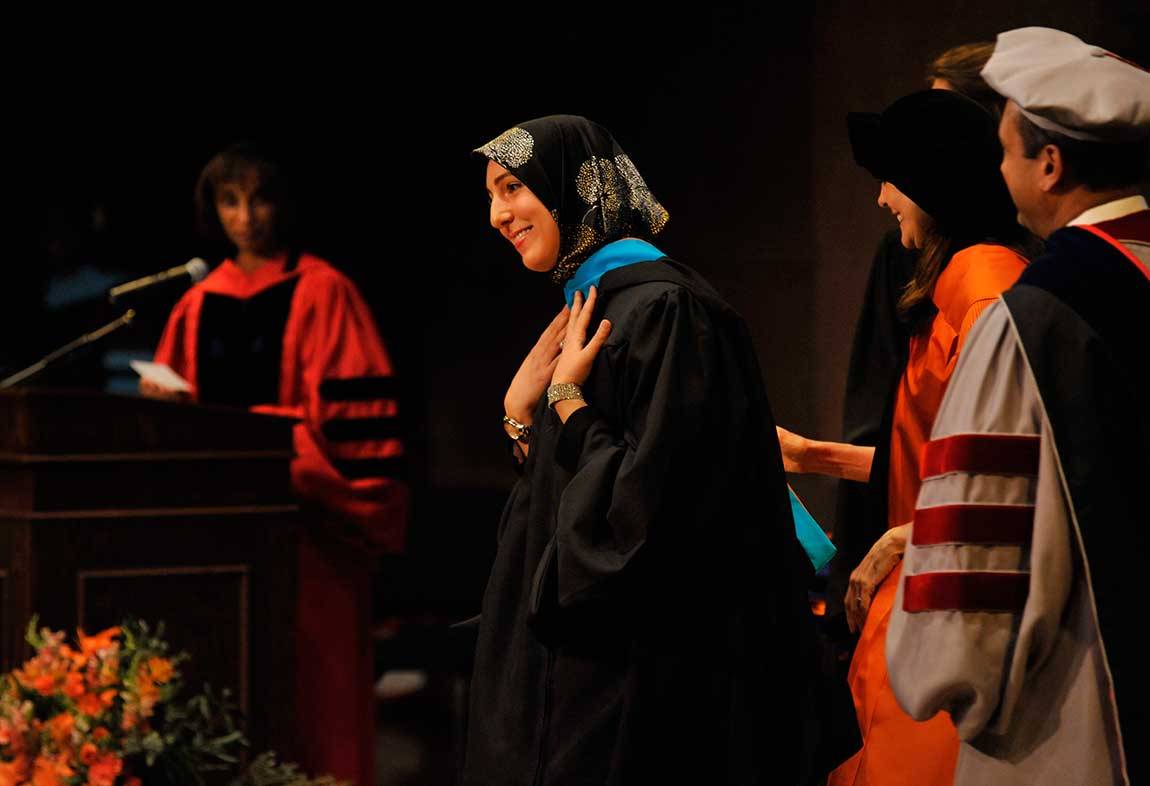 Yasmin Elhady is one of 15 people receiving a Master in Public Policy from Princeton's Woodrow Wilson School of Public and International Affairs.

This year's recipients are: Janet Currie, the Henry Putnam Professor of Economics and Public Affairs; Michael Mueller, an assistant professor of mechanical and aerospace engineering; Imani Perry, professor of African American studies; and Daniel Sigman, the Dusenbury Professor of Geological and Geophysical Sciences.

The Hooding ceremony is available for viewing online. End-of-the-year activities began with the Baccalaureate service on Sunday, May 31, and Class Day, June 1. Graduation activities conclude with Commencement Tuesday, June 2.