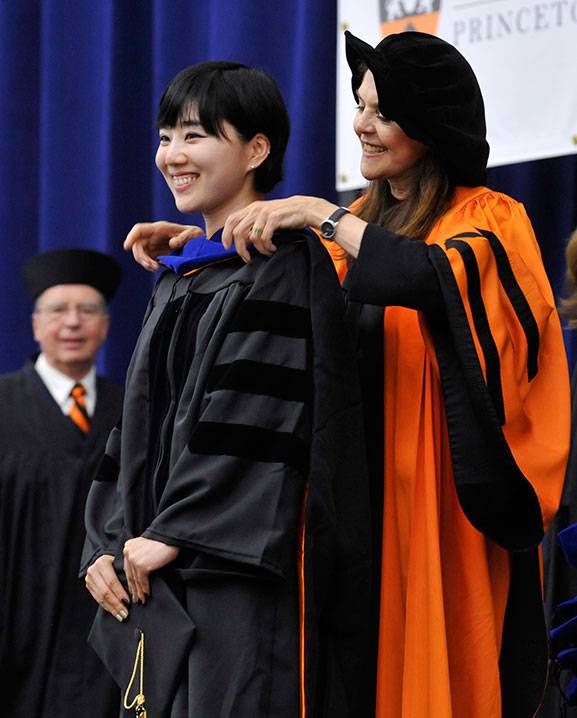 Princeton University's newest advanced-degree recipients and their supporters gathered Monday, May 30, in Jadwin Gymnasium to celebrate the Graduate School Hooding ceremony. Minjin Lee (pictured) received her doctorate in civil and environmental engineering and is being hooded by Sandra Bermann, the Cotsen Professor in the Humanities and chief marshal for University convocations. (Photos by Mark Czajkowski for the Office of Communications)

A sultry, overcast day could not dull the energy and excitement of Princeton University's newest advanced-degree recipients and their supporters who gathered Monday, May 30, in Jadwin Gymnasium for the Graduate School Hooding ceremony.

"This ceremony is a welcome opportunity for us to recognize the dedication, effort and intellect that you have brought to your work here," Princeton President Christopher L. Eisgruber said. "Your graduate degree is a testament to your talent and commitment as well as a mark of true excellence in scholarship and research. Congratulations on this tremendous achievement."

Sanjeev Kulkarni, dean of the Graduate School and a professor of electrical engineering, began the ceremony by acknowledging the years of hard work an advanced degree requires, and emphasizing the sense of accomplishment and the new opportunities that go along with completing it.

"Our purpose today is to recognize the efforts, dedication and accomplishments of our graduates, to congratulate them on completing master's and doctoral programs, and to celebrate their transitions into a broad range of careers in which they will achieve distinction over the coming years," Kulkarni said.

"The process of mastering a discipline and contributing something new to a body of knowledge with a deep focus is in fact broadening and liberating," he said. "It enables one to pursue new directions, new fields or entirely new endeavors with the abilities and confidence to not just succeed but to excel and to lead." 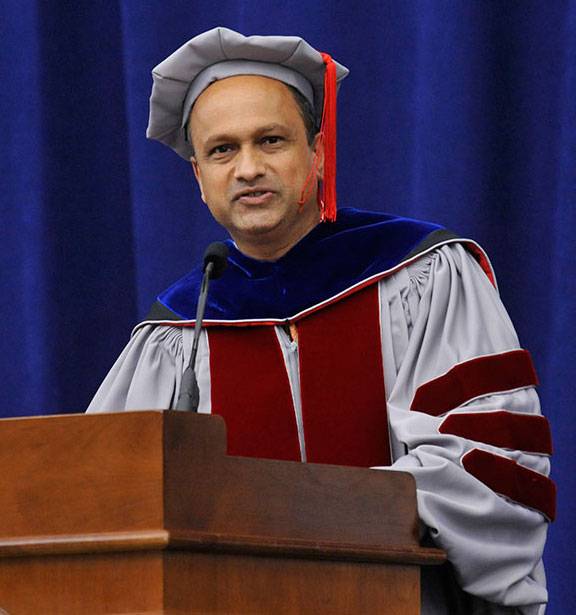 Sanjeev Kulkarni, dean of the Graduate School and a professor of electrical engineering, began the ceremony by emphasizing the years of hard work an advanced degree requires, and the new opportunities that go along with completing it.

The heavy woolen gown and hood that were necessities in the cold halls of medieval European universities — rather than in the thick heat of Jadwin Gym where Monday's event was relocated from Cannon Green under threat of heavy rain — gave rise to the advanced-degree hood. Each hood is bordered by a velvet band in the color assigned to the academic discipline in which the degree is granted, and the lining bears the degree-granting university's own colors — at Princeton, orange with a black chevron.

Jeffrey Morshed, who received his Master of Arts in Near Eastern studies, said that graduate study is an "arduous process," but "upon completion you get a body of intellectual work that is yours." Morshed's studies transformed him into a diligent and focused researcher and "instilled in me an appreciation for thorough research," he said. His graduate work drew from sources in five languages, including Arabic, which he learned in Oman as a Critical Language Scholar through the U.S. Department of State.

Beyond the access to research opportunities and resources such as Princeton's Firestone Library, Morshed said his intellectual growth largely came from his fellow students and his professors, the latter of whom often "wrote the books I was using."

"What makes Princeton unparalleled in my mind is the human capital — the professors and the student body," Morshed said. "They live and breathe the material. We were always able to have an exchange of ideas, which is part and parcel of a good education." 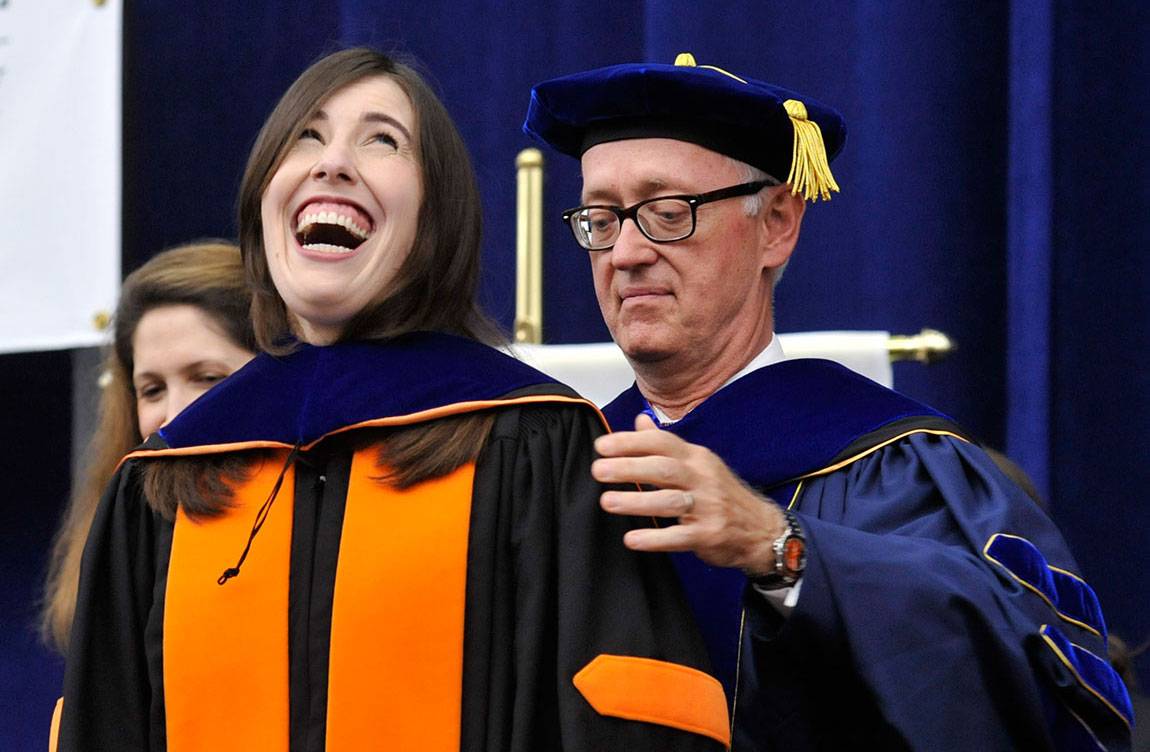 Esther Frederick, who received her doctorate in chemistry and materials science, was hooded by her adviser Steven Bernasek, a Princeton professor of chemistry, emeritus, and senior chemist. This was the second year that advanced-degree recipients could choose to be hooded by their adviser.

In recognition of the many people who help graduate students achieve their goals, Kulkarni urged advanced-degree recipients to "thank and recognize those who helped get them here," prompting them to cheer and applaud their advisers, colleagues, University staff, family and friends.

Kulkarni especially mentioned the more than 100 Princeton faculty members whom candidates chose to have hood them. This was the second year that advanced-degree recipients could choose to be hooded by their adviser. 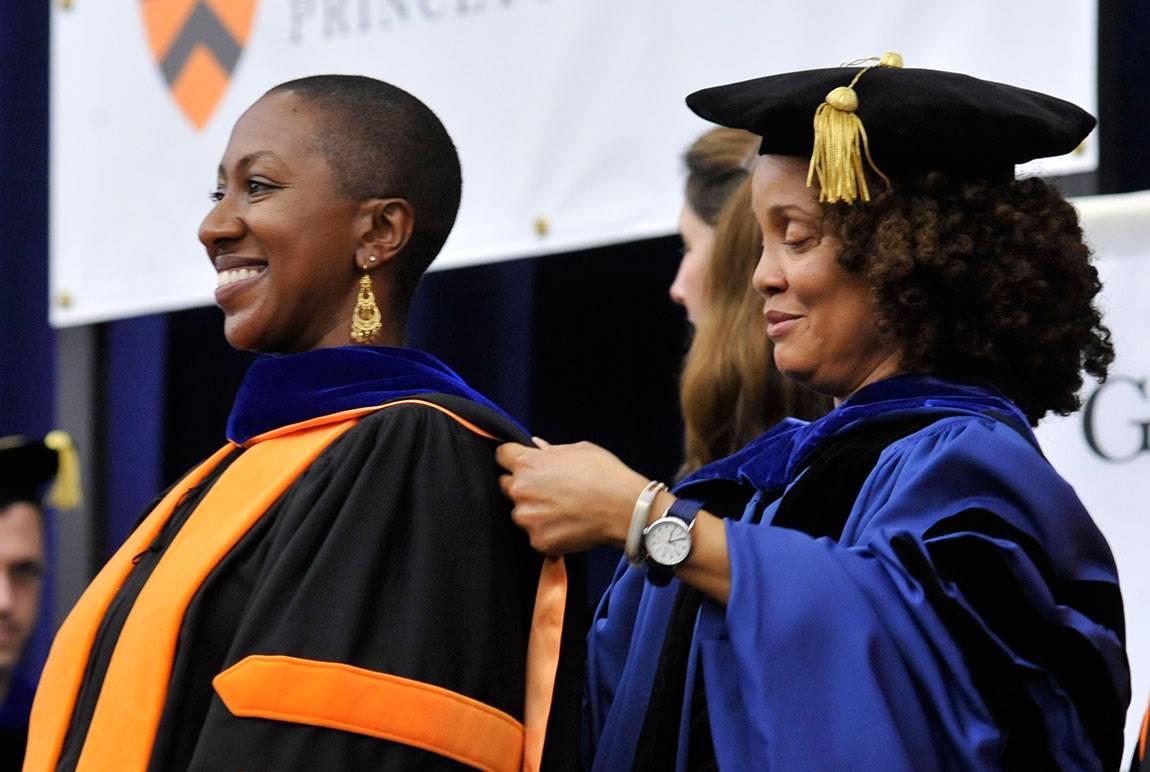 More than 100 Princeton faculty members were in attendance to hood their advanced-degree advisees. Justene Hill (left), who earned a Ph.D. in history, received her hood from her adviser Tera Hunter, a professor of history and African American studies.

"Their presence and participation reminds us that the complex journey to an advanced degree is made possible only with the continued encouragement, guidance and support of dedicated faculty," Kulkarni said.

Graeme Blair, who received his doctorate in politics, elected to be hooded by his adviser of eight years, Professor of Politics Kosuke Imai. "He was directly involved in my life every year — it's meaningful to have him here at the end as well," said Blair, who will soon join the faculty of the University of California-Los Angeles.

Blair said that his graduate work taught him that researchers can answer "big important questions in the world even though you're working on a small part of it." 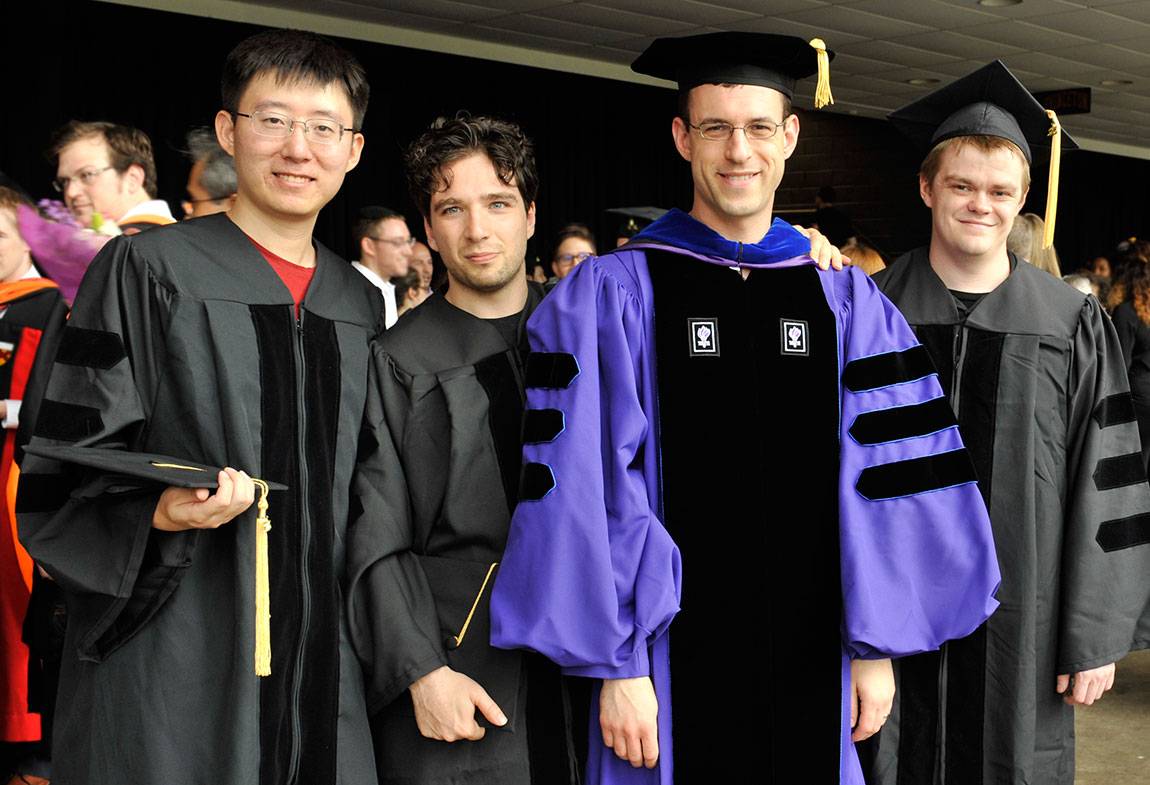 The advanced-degree hood originated in the cold halls of medieval European universities where a heavy woolen gown and hood were necessities.

As she waited for the ceremony to begin, Minjin Lee, who received her doctorate in civil and environmental engineering, discussed the differences in studying at Princeton and in her native South Korea. She said that research with her adviser, Peter Jaffe, a professor of civil and environmental engineering, was collaborative. Back home, the relationship between faculty and student can be more hierarchical, she said.

"I feel like he was my co-worker and not my boss," said Lee, who earned her degree last year and is now a postdoctoral research associate in Princeton's Program in Atmospheric and Oceanic Sciences. "The environment is more friendly and I felt more freedom to study." 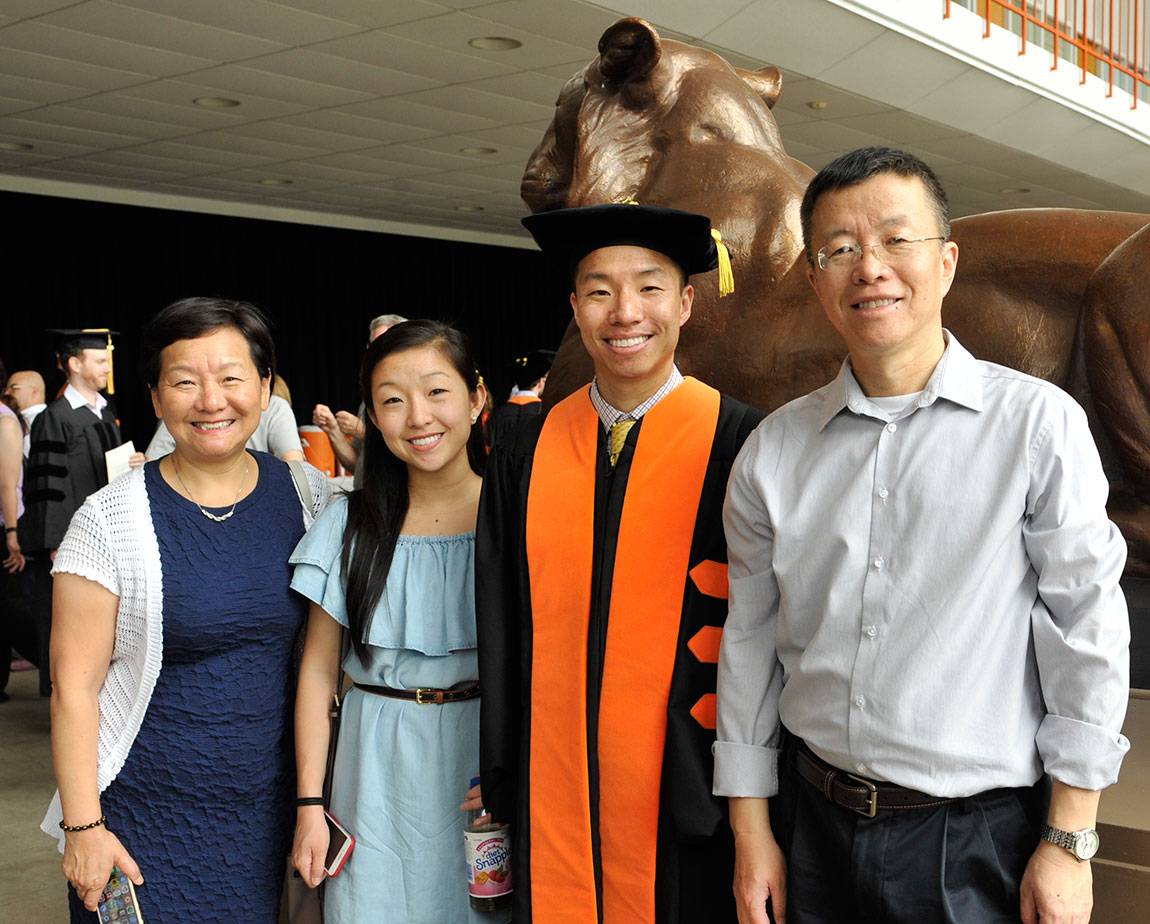 Each hood is bordered by a velvet band in the color assigned to the academic discipline in which the degree is granted, and the lining bears the degree-granting university's own colors — at Princeton, orange with a black chevron.

Advanced-degree recipients will be awarded their degrees at Princeton's 269th Commencement on Tuesday, May 31. The 906 graduate degrees granted during the academic year were:

Justin Mikolay, the outgoing president of the Association of Princeton Graduate Alumni who received his master's degree from Princeton in 2003, encouraged the latest class of Princeton doctoral and master's degree holders to stay involved in the University. He mentioned the emphasis put on graduate education and campus involvement in the strategic planning framework the Board of Trustees adopted in February. He also referred to the "Many Minds, Many Stripes" graduate alumni conference in 2013 as a "seminal event in graduate relations." 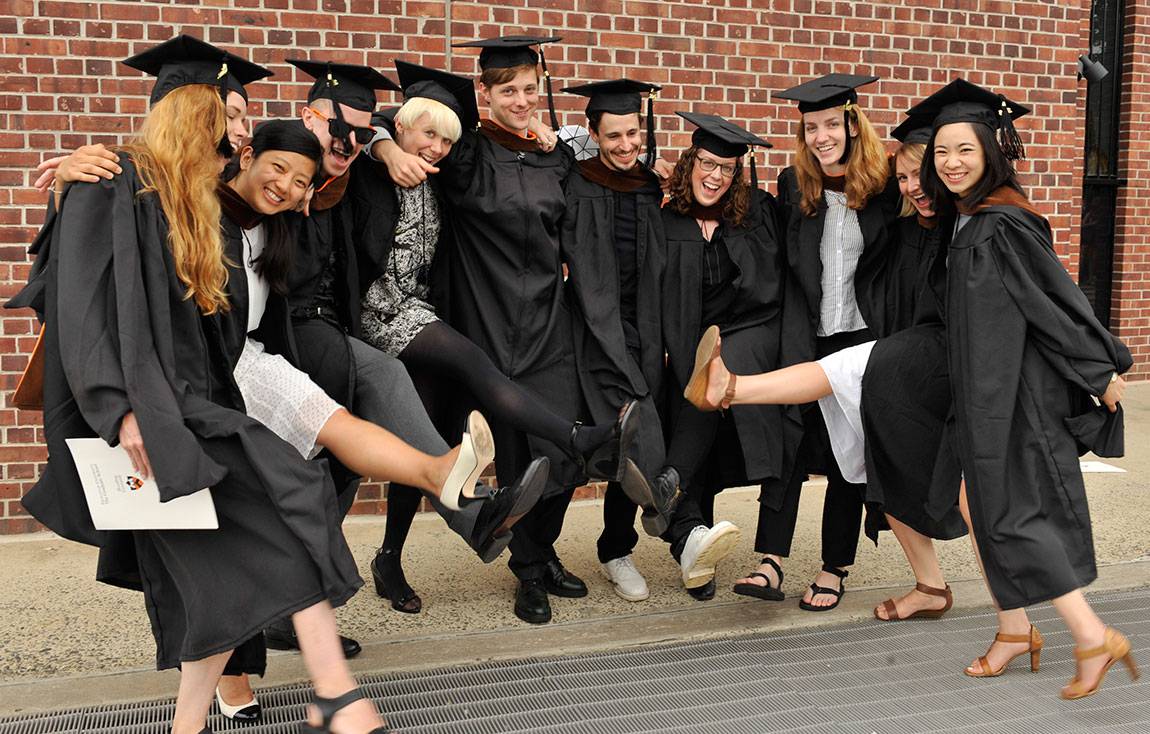 The energy and excitement of the hooding ceremony were not dulled by the threat of rain, which caused the venue to change from Cannon Green to Jadwin Gymnasium. 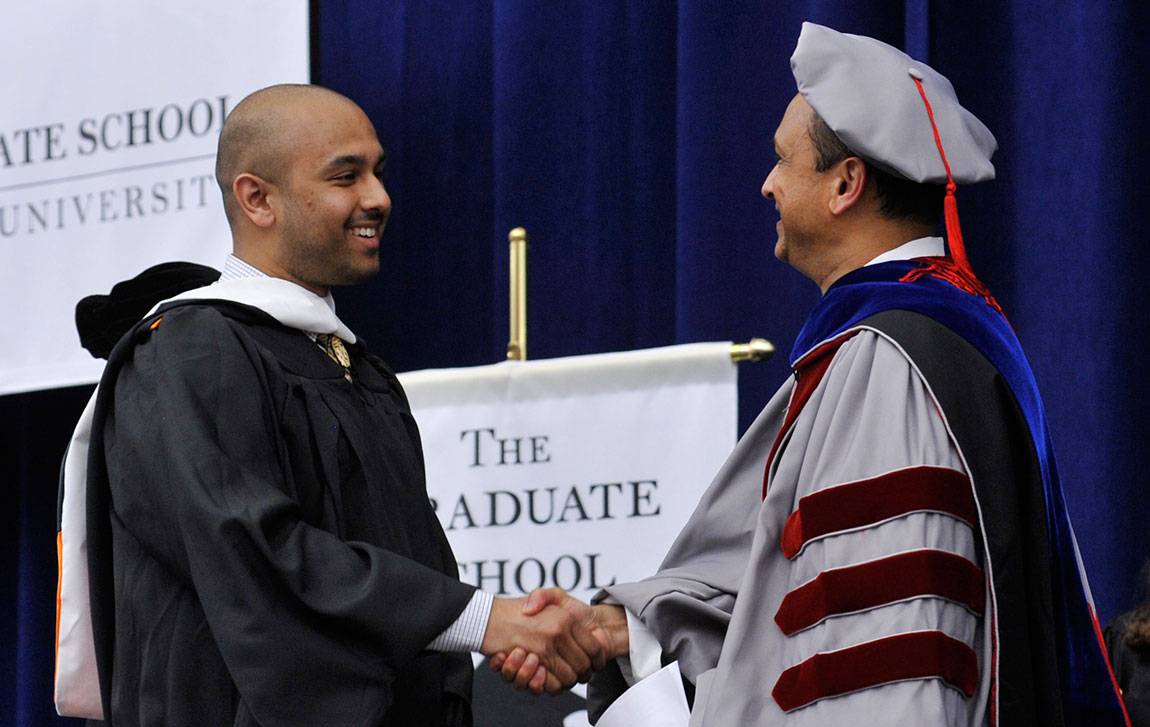 Jeffrey Morshed (left), who received his Master of Arts in Near Eastern studies, shakes hands with Kulkarni as he accepts his hood.

"We, the graduate community, are a special and essential part of this University," Mikolay said. Hooding, he said, is "not about leaving Princeton, as many of you will, but about coming back and giving back. … Every time I come back, I feel closer and closer to Princeton."

The 2016 recipients of the Graduate Mentoring Awards were honored during the Hooding ceremony. Presented by the McGraw Center for Teaching and Learning, the awards annually recognize faculty members for their exceptional work as mentors to graduate students at Princeton. 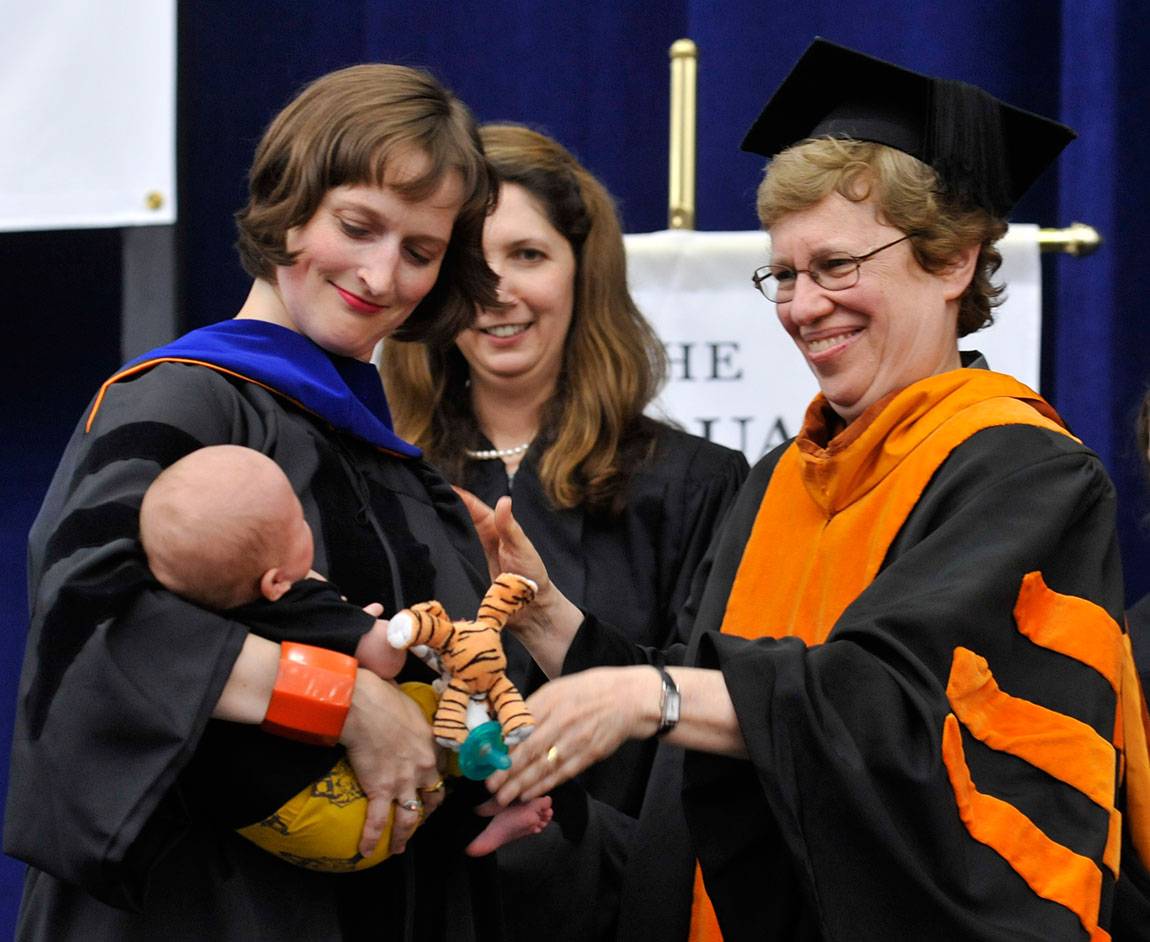 Megan Todd (left), who received her doctorate in public and international affairs, walked across the stage with her child Hadley Todd, and was hooded by Noreen Goldman, the Hughes-Rogers Professor of Demography and Public Affairs in the Woodrow Wilson School of Public and International Affairs.

The Hooding ceremony will be available for later viewing online. End-of-the-year activities began with the Baccalaureate service on Sunday, May 29, and Class Day, May 30. Graduation activities conclude with Commencement Tuesday, May 31. 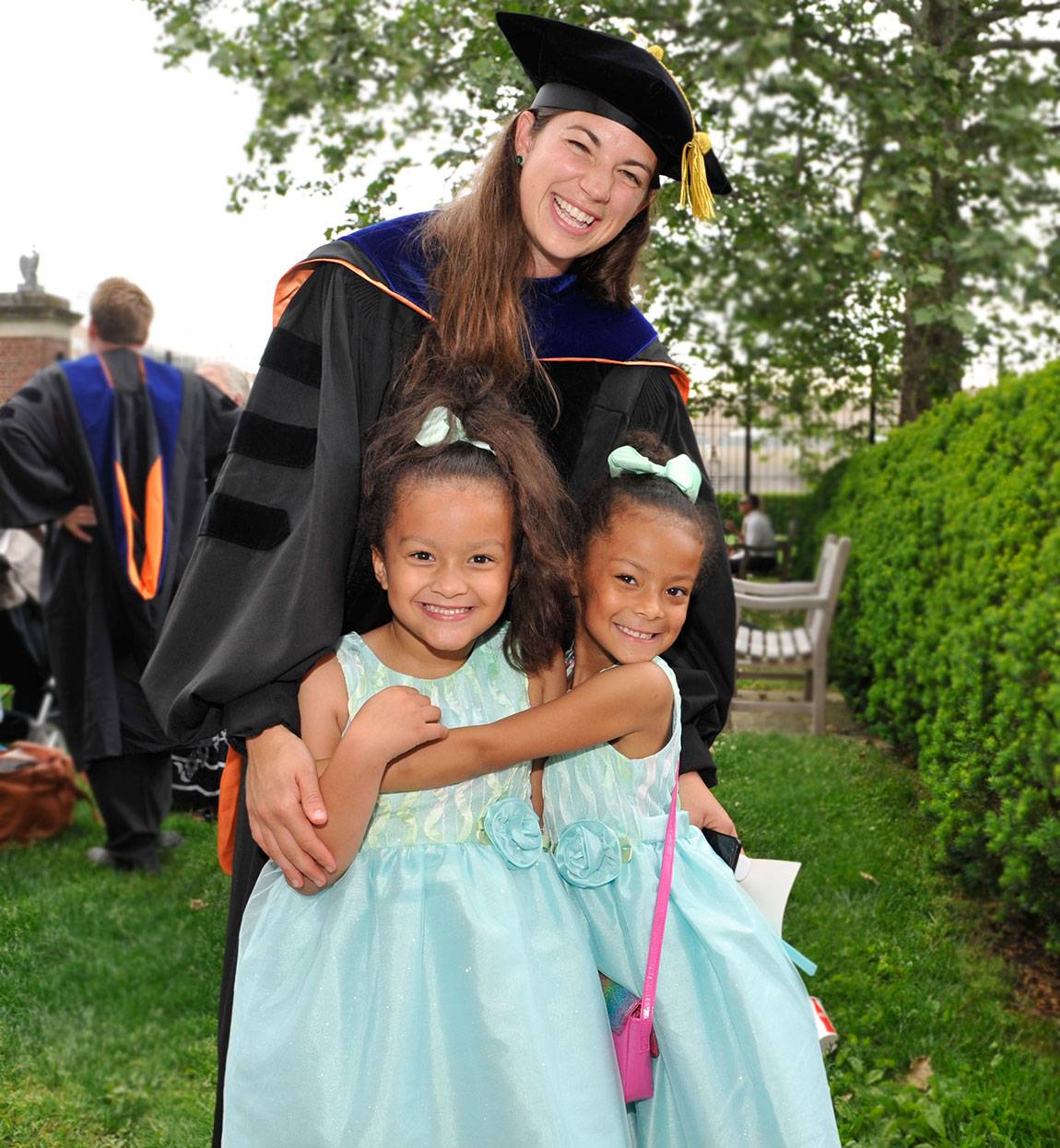 A theme of hooding was gratitude for the many people who help graduate students achieve their goals. Christina Faust (above), who earned her Ph.D. in ecology and evolutionary biology, hugs her nieces Timolyn and Willow Faust.