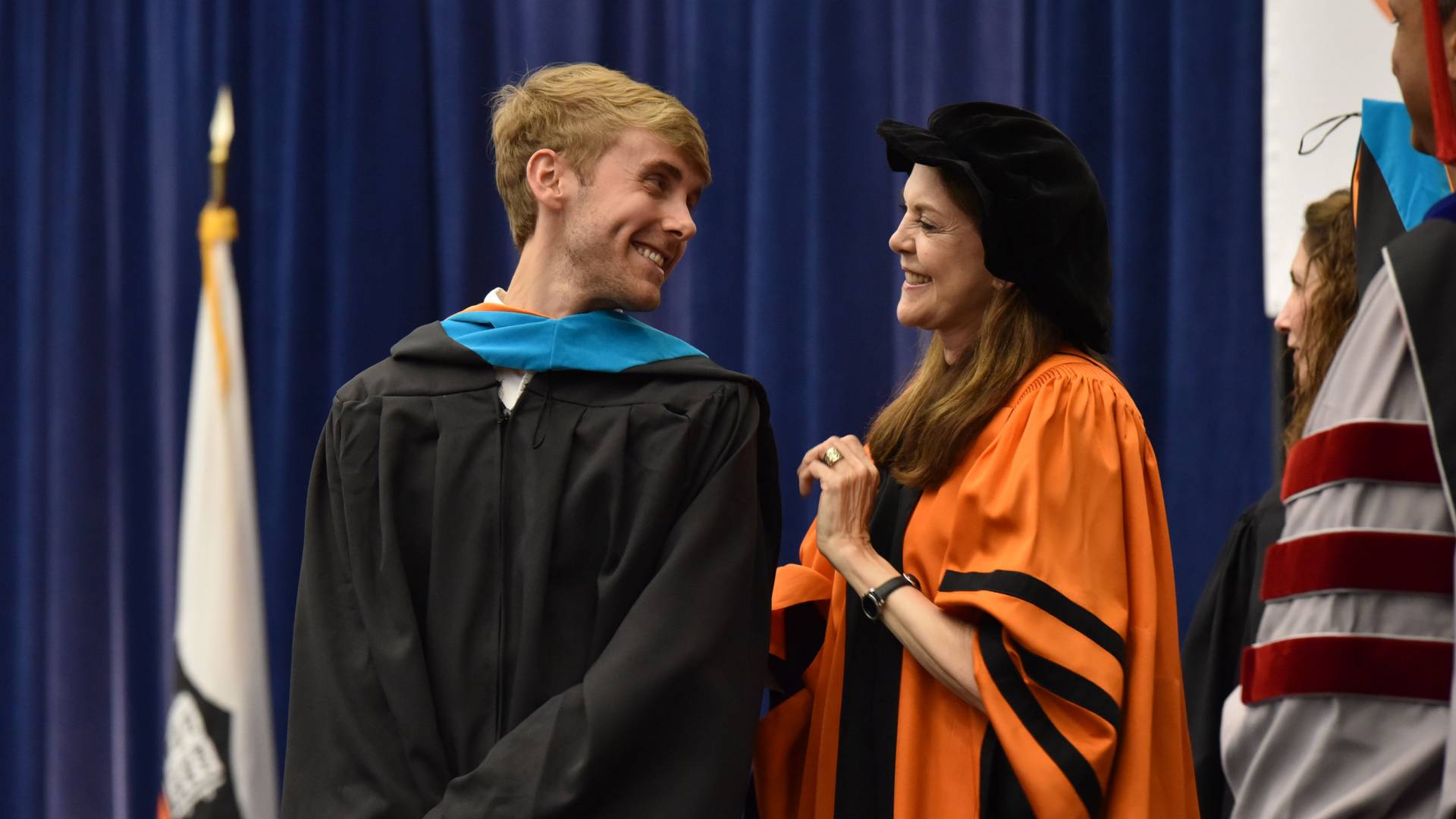 Rain clouds could not dampen the excitement and pride of advanced-degree recipients and their supporters who gathered Monday, June 5, in Jadwin Gymnasium for the Graduate School Hooding ceremony. 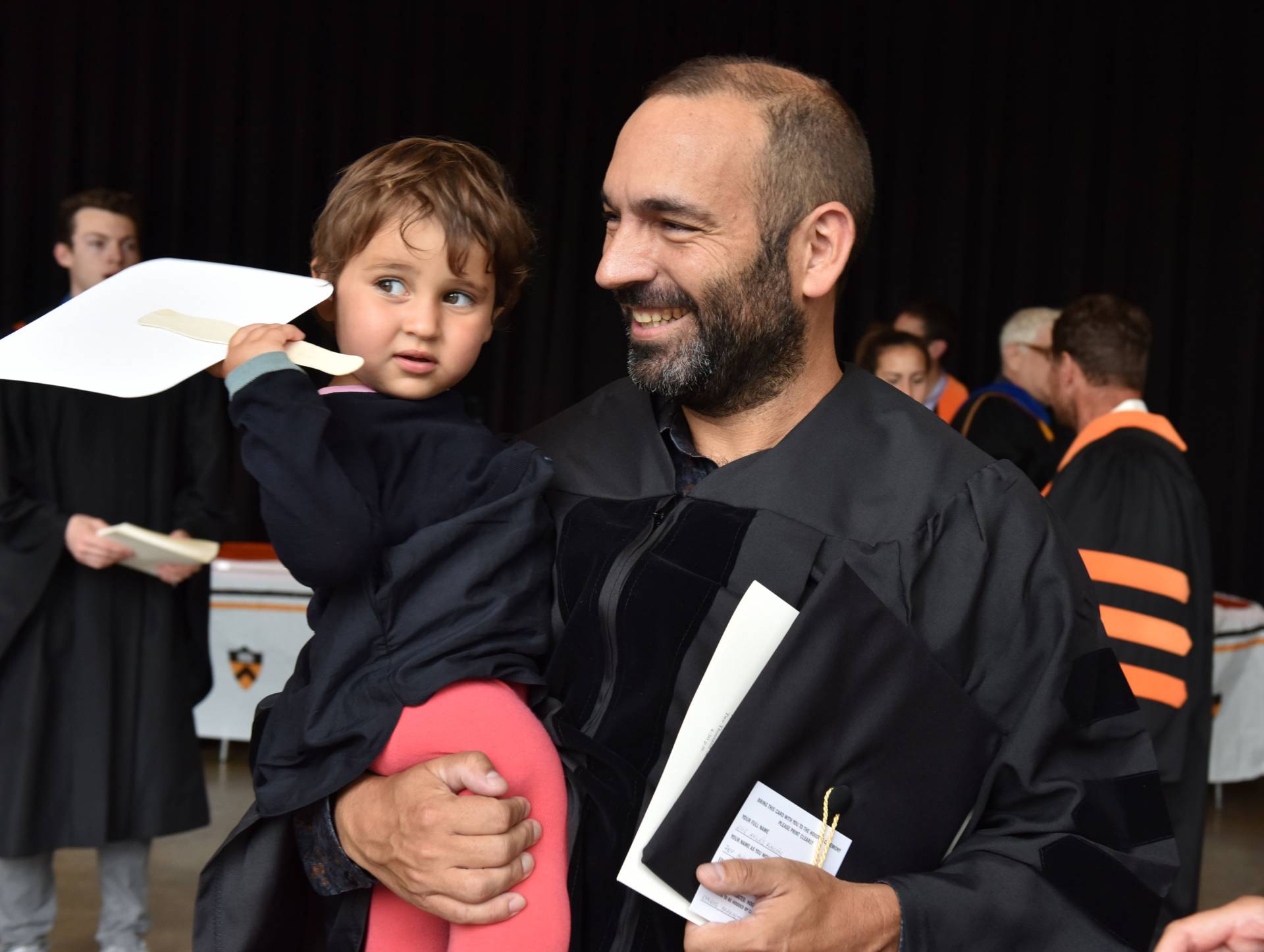 The energy and excitement of the hooding ceremony were not dulled by the threat of rain, which caused the venue to change from Cannon Green to Jadwin Gymnasium. Luis Aviles, who received his doctorate in architecture, poses with daughter Vera Celma before the ceremony.

"This ceremony is a welcome opportunity for us to recognize the dedication, effort and intellect that you have brought to your work here," Princeton President Christopher L. Eisgruber said. "Your graduate degree is a testament to your talent and commitment as well as a mark of true excellence in scholarship and research. Congratulations on this tremendous achievement!"

Sanjeev Kulkarni, dean of the Graduate School and a professor of electrical engineering, began the ceremony by acknowledging the years of hard work an advanced degree requires, and emphasizing the sense of accomplishment and the new opportunities that go along with completing it. 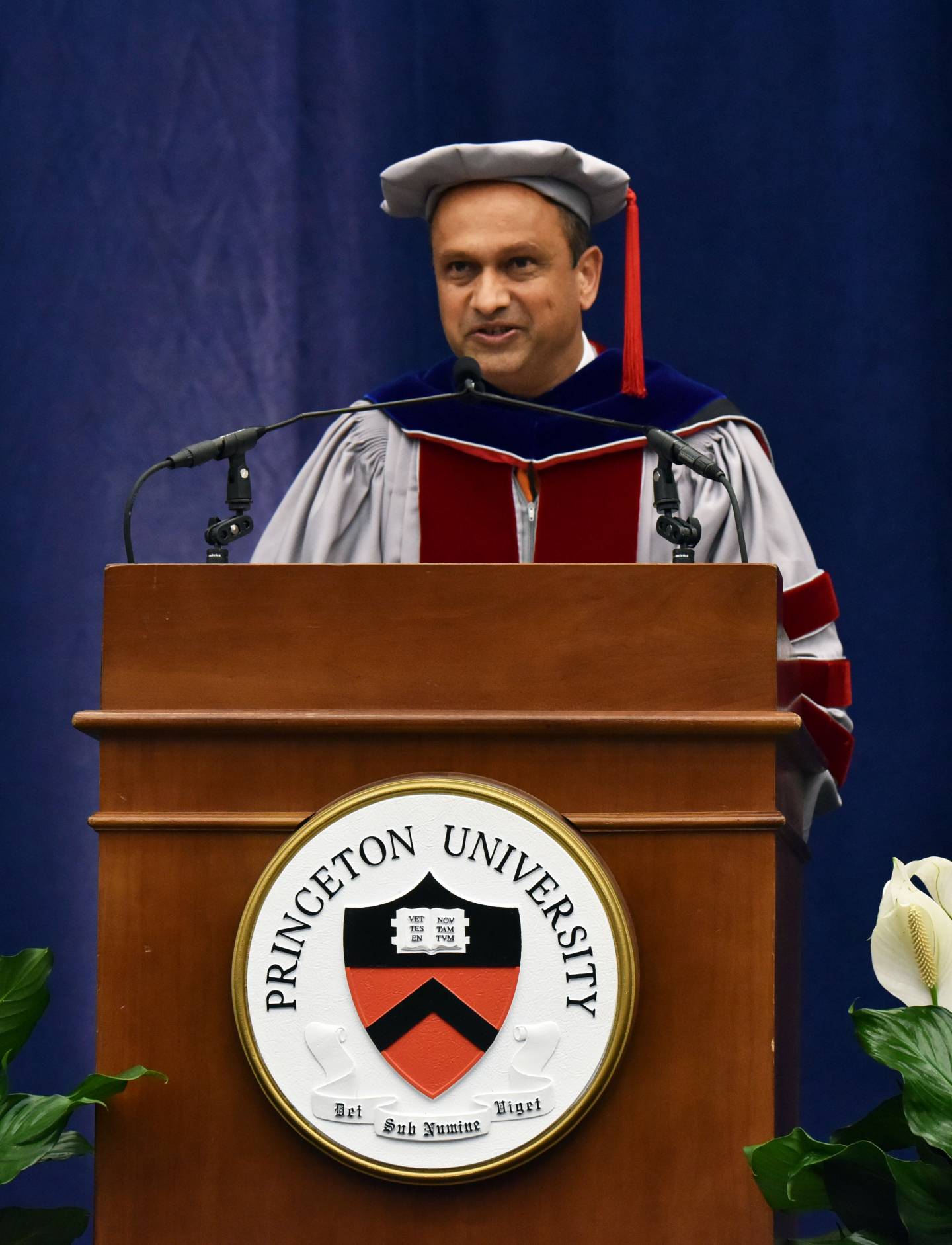 Dean of the Graduate School Sanjeev Kulkarni, whose appointment as Princeton's next dean of the faculty was announced Monday, began the ceremony by emphasizing the years of hard work an advanced degree requires, and the new opportunities that go along with completing it.

"Our purpose today is to recognize the efforts, dedication and accomplishments of our graduates, to congratulate them on completing master's and doctoral programs, and to celebrate their transitions into a broad range of careers in which they will achieve distinction in the coming years," Kulkarni said.

In recognition of the many people who help graduate students achieve their goals, Kulkarni urged advanced-degree recipients to "recognize and thank those who helped get them here," prompting them to cheer and applaud their advisers, colleagues, University staff, family and friends.

Kulkarni — whose appointment as Princeton's next dean of the faculty was announced Monday — especially mentioned the more than 80 Princeton faculty members whom candidates chose to have hood them. This was the third year that advanced-degree recipients could choose to be hooded by their adviser.

"Their presence and participation reminds us that the complex journey to an advanced degree is made possible only with the continued encouragement, guidance and support of dedicated faculty," Kulkarni said.

The colorful gowns and hoods worn as part of the traditional regalia had less glamorous origins: a heavy woolen gown and hood were necessities in the cold halls off medieval European universities. Hoods embody an important symbolism and distinguish the wearer by both rank and academic discipline. Each hood is bordered by a velvet band in the color assigned to the academic discipline in which the degree is granted, and the lining bears the degree-granting university's own colors — at Princeton, orange with a black chevron.

"Today, to the gown that you already wear we add a hood appropriate to your degree and academic discipline," Kulkarni said. "At Princeton, these disciplines span the humanities, social sciences, natural sciences and engineering, including architecture, finance and public policy. Your hood signifies the knowledge you have gained, the skills you have developed, and your mastery of and contributions to your scholarly field."

Members of the graduate class of 2017 described their decision to be hooded by their adviser as one intended to honor what can be years of working closely together, a time during which a faculty member guides an aspiring scholar through their evolution from a student to a future colleague.

Yingfei Wang, who received her Ph.D. in computer science, said that her adviser, Warren Powell, professor of operations research and financial engineering and director of the Program in Engineering and Management Systems, will continue to help her as an academic. 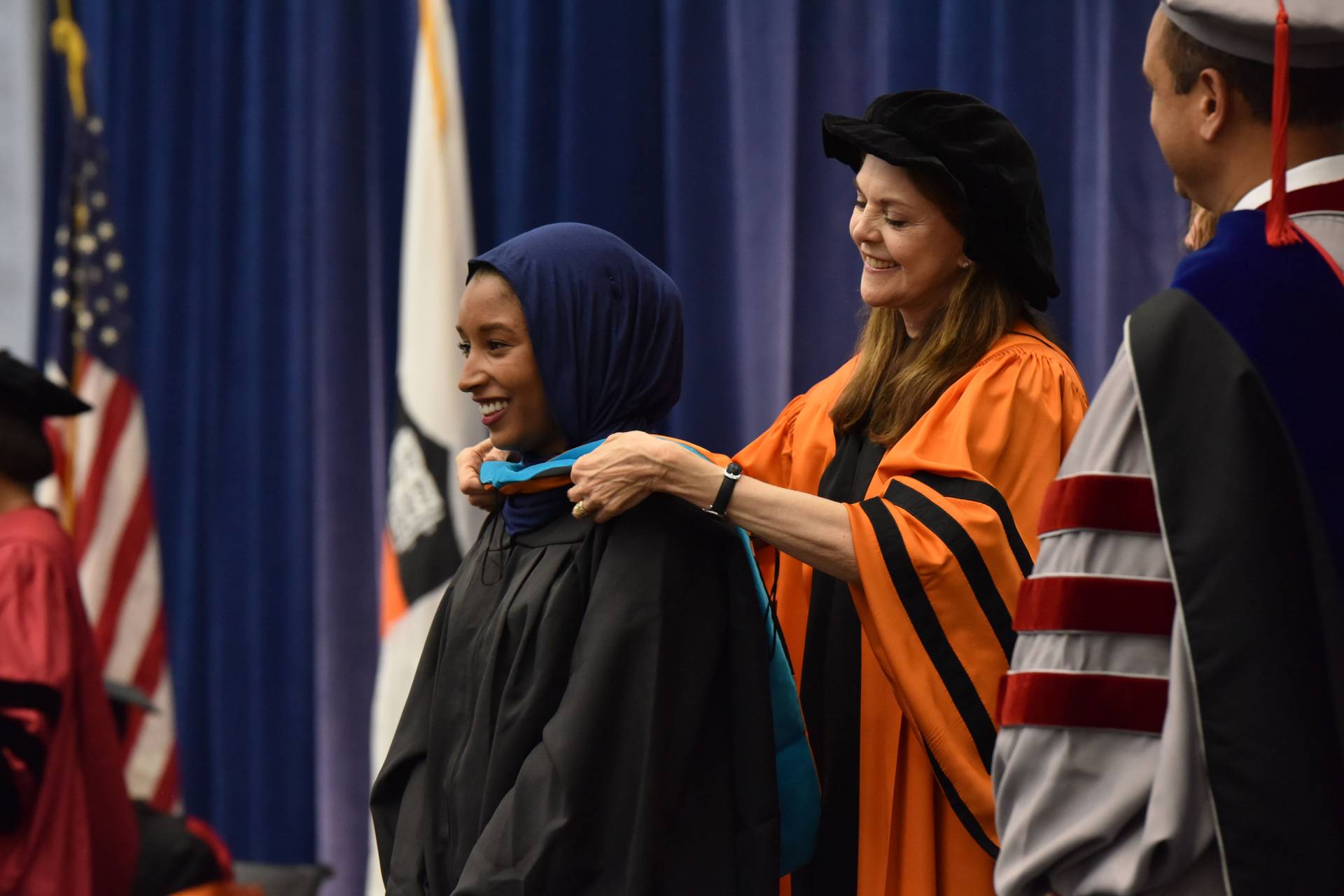 Sajda Ouachtouki (pictured) is receiving her master’s degree in public affairs and is being hooded by Sandra Bermann, the Cotsen Professor in the Humanities and chief marshal for University convocations.

"His great passion for research taught me how to conduct myself in my academic life," Wang said. She also said her intellectual growth was shaped by her fellow students. "The interdisciplinary collaboration with my lab mates [provided] opportunities to learn fresh perspectives from others. I will always be thankful for everything that I gained here, and I'm sure I will benefit from it for a lifetime."

Powell, in turn, also said he drew inspiration from his advisees. "Hooding five students spanning four departments is a special experience for me," he said. "I have also drawn on their willingness to become engaged in projects ranging from energy to health to materials science."

Hiba Abdel-Jaber, who received her doctorate in civil and environmental engineering and was hooded by her adviser Branko Glišić, associate professor of civil and environmental engineering, also praised those who inspired her path. "Being surrounded by such talent, intellect and great work ethic can be intimidating at first, but I am grateful to have met people who have pushed me and taught me how to push myself harder in order to stand here proudly today to receive my degree," she said. 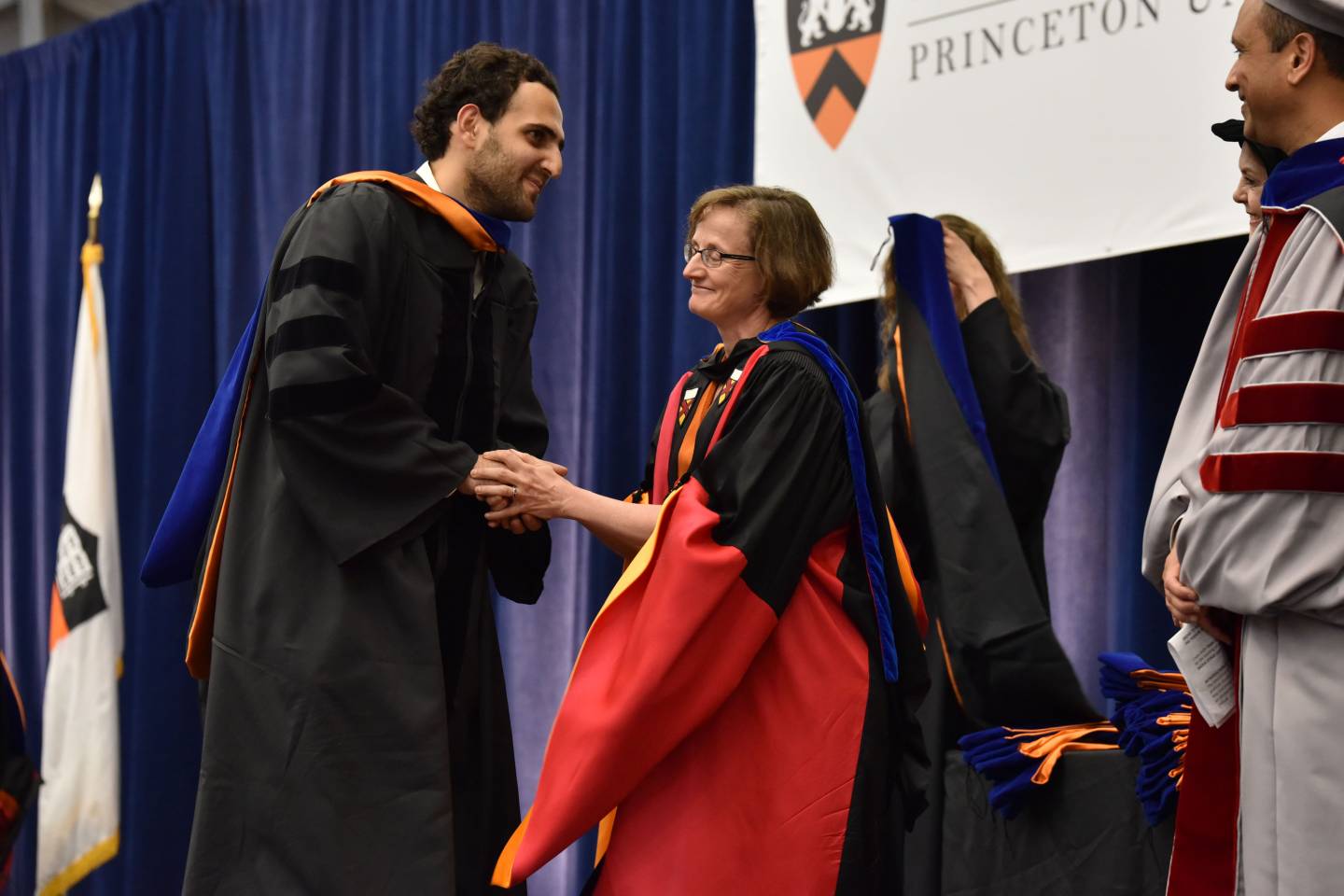 Ali Javadi-Abhari, who is receiving his doctorate in electrical engineering, shakes hands with his adviser Margaret Martonosi, the Hugh Trumbull Adams '35 Professor of Computer Science, after he accepts his hood.

Jeremy Adelman, the Henry Charles Lea Professor of History, said that the celebration is an occasion to acknowledge the passage from being a student to being a scholar. "Hooding gives me an opportunity to register my appreciation and respect for what my students have accomplished," said Adleman, who hooded three of his advisees. "They are each making their own ways as young faculty. In a way, hooding is a gesture to them that they are now my peers — fellow faculty members."

Advanced-degree recipients were awarded their degrees at Princeton's 270th Commencement on Tuesday, June 6. The 520 graduate degrees granted during the academic year were:

Eisgruber encouraged the latest class of Princeton doctoral and master's degree holders to impart their success and knowledge to the nation and the University. "Tomorrow, you will join Princeton's graduate alumni community, a group distinguished not only for its intellectual power but for the depth and breadth of its commitment to serving the nation and the world," he said.

"Your membership in this alumni community is at once an accomplishment and a call to action," he added. "I know that each of you will find your own path of service to the nation and to humanity. My colleagues and I look forward to seeing that path unfold in the years ahead, and we hope that you will come back often to visit this campus, to update us on your adventures, and to renew your connections with this University and with other alumni." 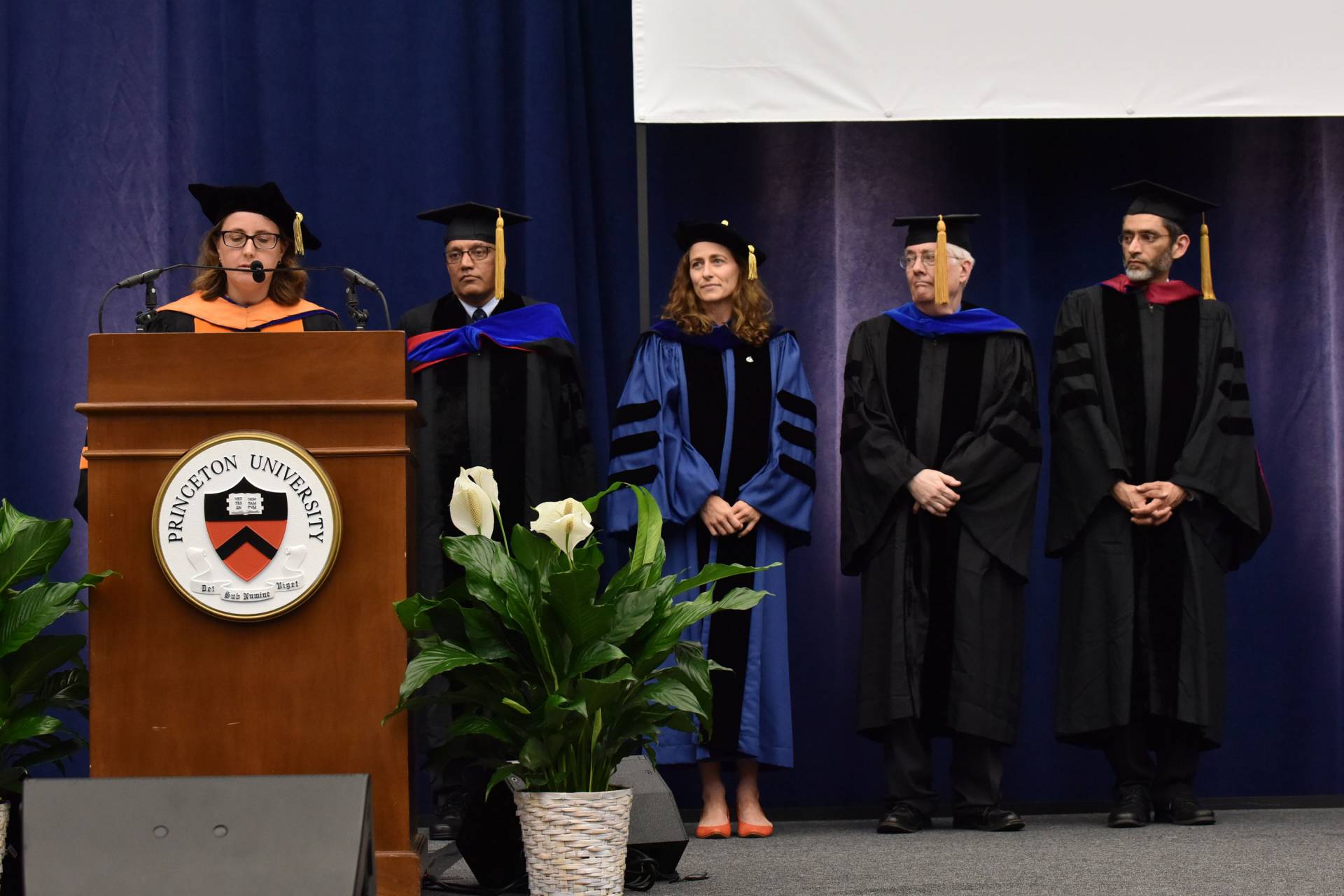 The 2017 recipients of the Graduate Mentoring Awards are honored during the Hooding ceremony. Presented by Rebecca Graves-Bayazitoglu (left), director of the McGraw Center for Teaching and Learning and associate dean of the college, the awards annually recognize faculty members for their exceptional work as mentors to graduate students at Princeton. This year's recipients are (from left to right): Sankaran Sundaresan, the Norman John Sollenberger Professor in Engineering and professor of chemical and biological engineering; Elizabeth Levy Paluck, professor of psychology and public affairs; Christopher Achen, the Roger Williams Straus Professor of Social Sciences and professor of politics; and Muhammad Qasim Zaman, the Robert H. Niehaus ’77 Professor of Near Eastern Studies and Religion and chair of the Department of Near Eastern Studies.

The 2017 recipients of the Graduate Mentoring Awards were honored during the Hooding ceremony. Presented by the McGraw Center for Teaching and Learning, the awards annually recognize faculty members for their exceptional work as mentors to graduate students at Princeton.

The Hooding ceremony will be available for later viewing online. End-of-the-year activities began with the Baccalaureate service on Sunday, June 4, and Class Day on June 5. Graduation activities conclude with Commencement on Tuesday, June 6. 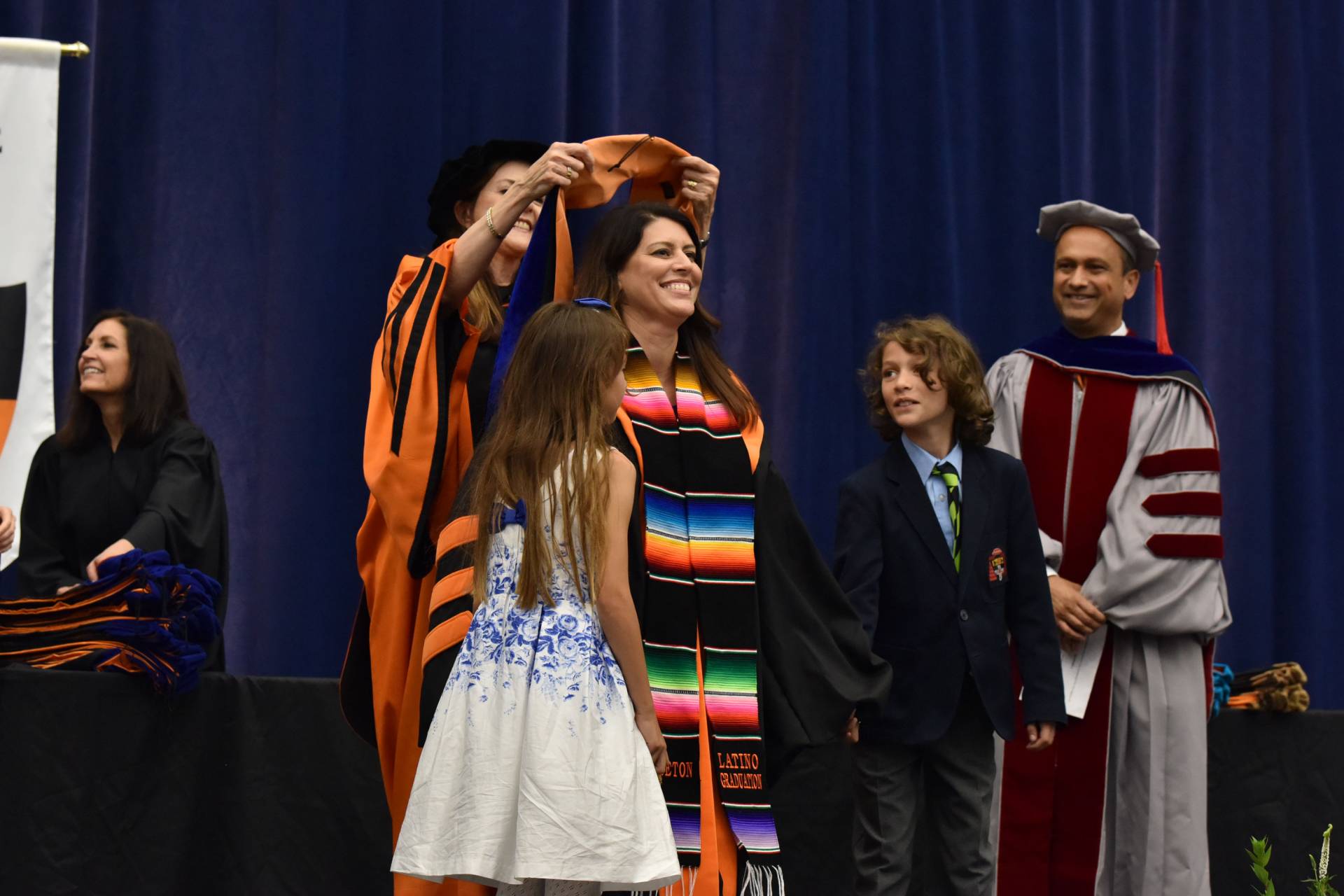 Margaret Sena, who is receiving her doctorate in history, walked across the stage with her children, Reina and Christopher Crews, and was hooded by Bermann. 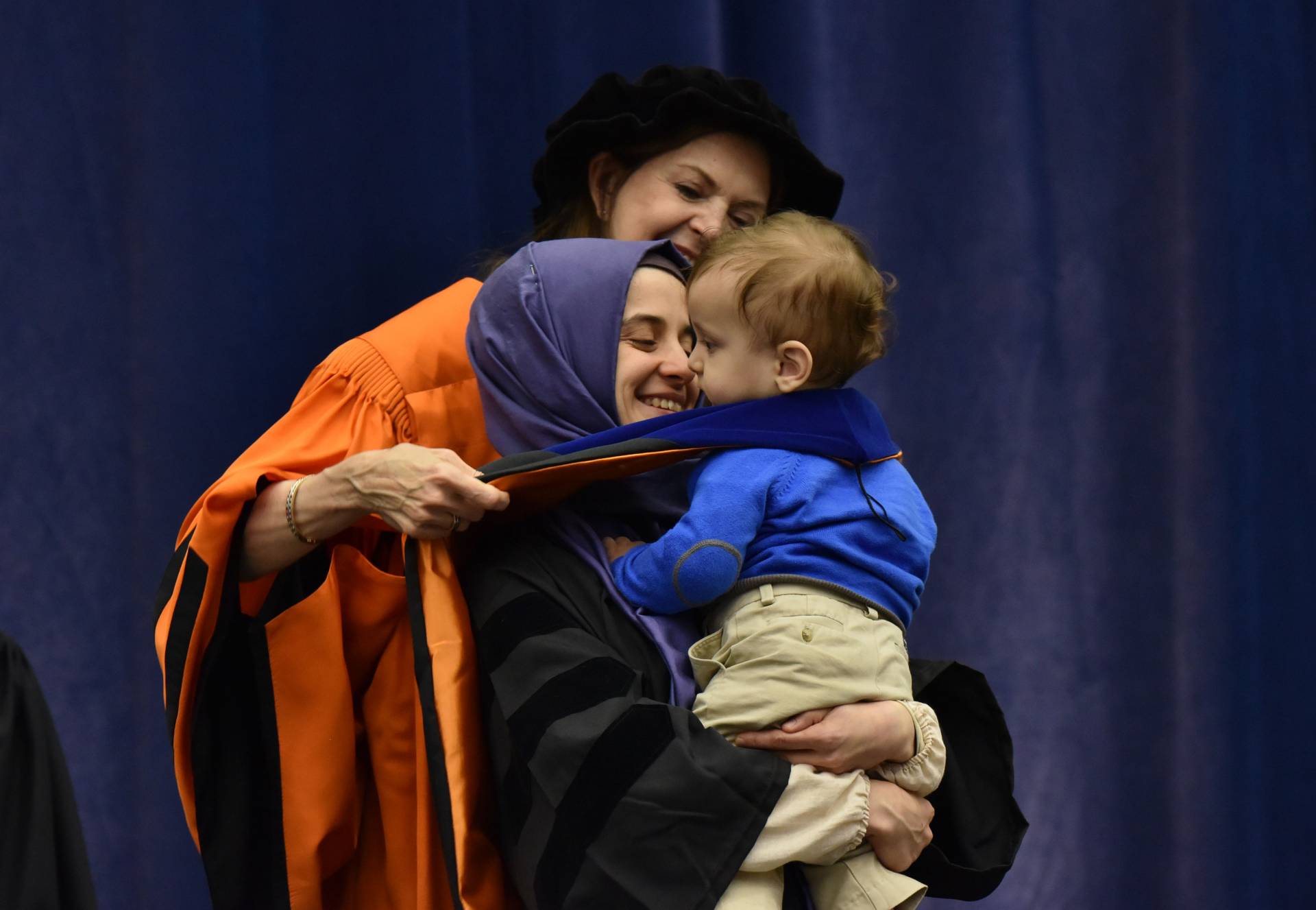 Hande Boyaci, who is receiving her doctorate in chemistry, received her hood with her son, Levent, in tow. 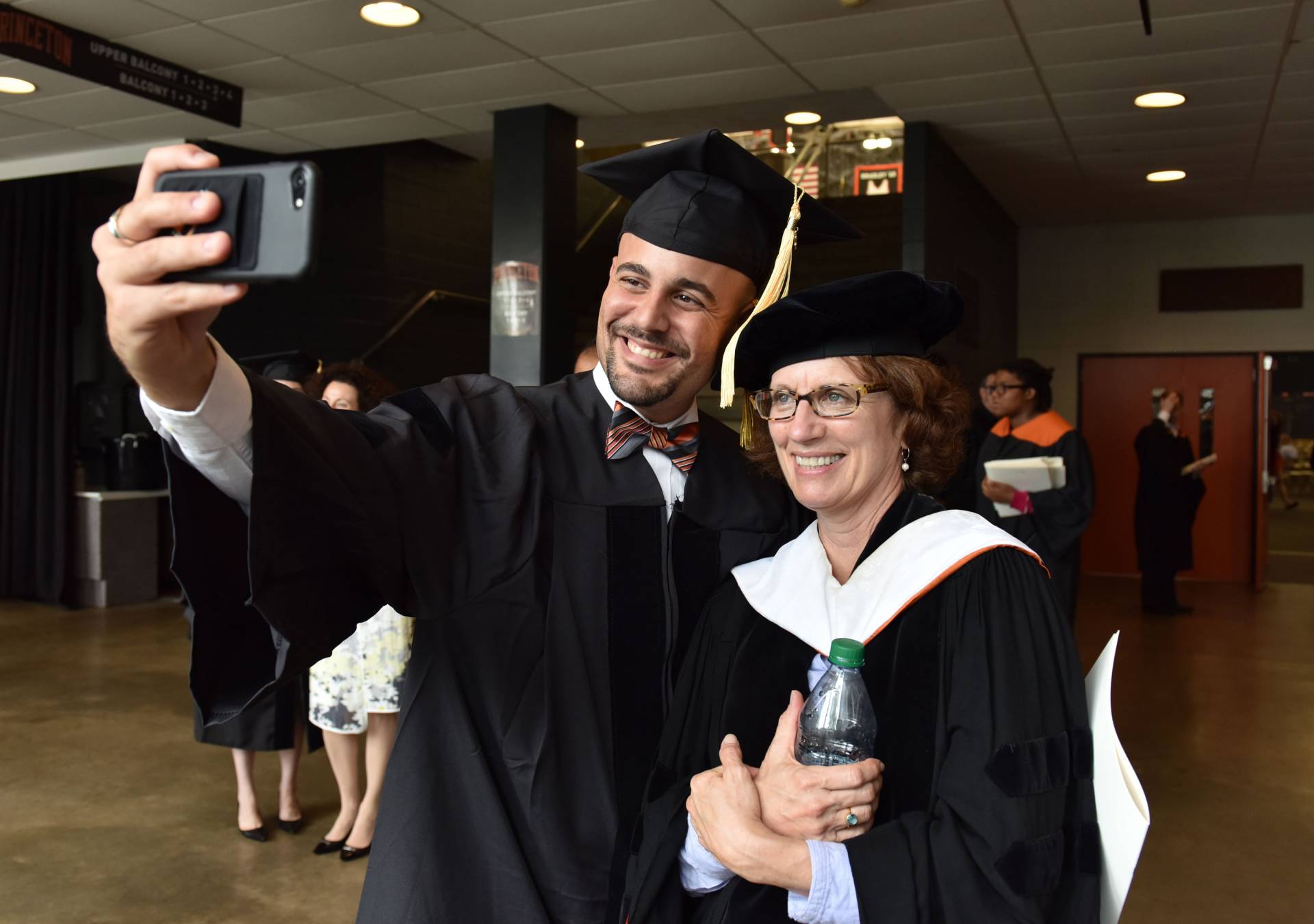 More than 80 Princeton faculty members were in attendance to hood their advanced-degree advisees. This was the third year that advanced-degree recipients could choose to be hooded by their adviser. Alfredo García, a Ph.D. candidate in sociology, memorializes the day with his adviser Deborah Kaple, a research scholar in sociology who earned her doctoral degree from Princeton in 1991.

A theme of Hooding was gratitude for the many people who help graduate students achieve their goals. Kathleen Alda Balthrop-Lewis, who earned her Ph.D. in religion, hugs her nieces and nephews.