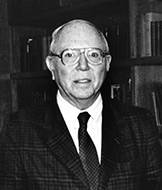 A. Walton Litz, the Holmes Professor of Belles Lettres, Emeritus, and professor of English, emeritus, at Princeton University, died of respiratory failure at the University Medical Center of Princeton at Plainsboro, New Jersey, on June 4. He was 84.

Litz, an expert on modern American and English literature — with a focus on T.S. Eliot, James Joyce, Ezra Pound and Wallace Stevens — joined Princeton's faculty in 1956 and retired in 1994.

Born in Nashville, Tennessee, on Oct. 31, 1929, Litz earned his bachelor's degree from Princeton in 1951 and his D.Phil. from the University of Oxford, where he studied as a Rhodes Scholar. He served in the United States Army from 1954 to 1956.

"From his pioneering study of Joyce's compositional method, 'The Art of James Joyce' (1961), to his illuminating work on Stevens, Eliot and Pound, to his many major editions and collections, Walt Litz was one of the most distinguished modernist scholars of his generation," said William Gleason, professor of English and chair of the Department of English.

Litz's publications include "James Joyce" (1966); the 63-volume "Joyce Archive" (1977-80), for which he served as associate editor; "Introspective Voyager: The Poetic Development of Wallace Stevens" (1972); and "Wallace Stevens: The Poetry of Earth" (1981). He appeared in the Stevens segment of the 1988 PBS series "Voices and Visions," a 13-part biographical and critical study of modern American poets.

John Fleming, the Louis W. Fairchild '24 Professor of English and Comparative Literature, Emeritus, said Litz's "published work in high modernist literature seems as fresh today as when it was written."

Fleming arrived at Princeton in 1965 and said Litz was "already a legend" as a teacher. "It was said that he would casually chat with a group of students walking to their preceptorial, then seamlessly continue in 'pedagogic mode' within the classroom without skipping a beat. He was a person of extraordinary professional generosity who gave crucial support to the careers of dozens of young scholars," Fleming said.

Gleason said Litz was "an inspiring mentor to countless graduate students who admired his encyclopedic knowledge, his wide range of interests and his enthusiasm for the study of literature and criticism."

One of Litz's students was Susan Lowell Humphreys, who earned her Ph.D. in English from Princeton in 1979. A writer, publisher and rancher in southern Arizona, she is the author of 16 books and is working on a study of the Victorian novelist Anthony Trollope. She said it was Princeton's "fine collection of Trollopian materials" that brought her to the University in 1976 and connected her with Litz, her Ph.D. adviser.

"Walt Litz was a splendid scholar and teacher with a crystal-clear intellect and a fine sense of humor, as well as great practical sense. He was particularly kind and gentle with bumbling young graduate students," said Humphreys. "His wonderful lectures, always a treat to hear, were also timed to finish exactly as the bell began to ring.

"Once he told me that when he was at Oxford he was allowed to borrow some of T.S. Eliot's manuscripts and went off marveling at his luck with the papers — possibly the text of 'The Waste Land' — piled in his bicycle basket. They could not have been in better hands," Humphreys said.

Litz served in a number of administrative capacities, including chair of the English department from 1974 to 1981, during which time Fleming said the department "gained international luster." He was also graduate director of the English department; chair of the Council of the Humanities; and director of the Program in Creative Writing. A member of the editorial board of Princeton University Press for four years, he served as chair in 1972.

"Walt Litz left his mark on some of the most important and influential intellectual centers for literature and the arts within this University," Gleason said.

Litz was also a longtime instructor at the Bread Loaf School of English, the graduate school of English at Middlebury College. In 1989, he was named to the Eastman Visiting Professorship at Balliol College, Oxford. He was a member of the American Philosophical Society and served on the executive council of the Modern Language Association and as a trustee of Oxford University Press and the Ezra Pound Literary Trust.

Litz was awarded fellowships by the American Council of Learned Societies, the National Endowment for the Humanities and the Guggenheim Foundation.

He is survived by four children, Katharine, Andrew, Victoria and Emily; and six grandchildren.