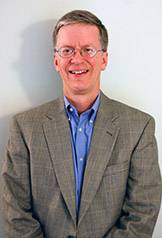 Princeton University's Office of Technology Licensing has named W. Bradford Middlekauff as its first executive in residence, a position aimed at offering an entrepreneurial and industry-based perspective to the faculty and students involved in the transfer of University discoveries to the marketplace.

Middlekauff will advise University inventors and entrepreneurs on how to bring technologies and innovations forward for further development at an existing company or at a new start-up. Middlekauff began his duties Oct. 6.

"We envision the executive in residence as becoming involved in a range of activities, from discussing with Princeton inventors the commercial prospects for their research to providing guidance to faculty and student entrepreneurs looking to create start-ups," said John Ritter, director of technology licensing. "We are excited about the ability to bring the depth of Brad's expertise in start-ups and University spin-offs to the Princeton community."

In addition, Ritter said, Middlekauff will review and provide input on Princeton's unlicensed intellectual property with the goal of identifying untapped opportunities, provide input on Princeton's patent and seed fund decisions, and speak about technology transfer and entrepreneurship to classes, student clubs and at panel discussions. He will also offer opportunity assessments and commercialization strategies, develop concept roadmaps, mentor new and existing Princeton start-ups, and facilitate contact with industry experts.

Middlekauff has served in senior management at two companies that were built around university technologies. From 2008 to 2013, he was chief legal officer at Kolltan Pharmaceuticals in New Haven, Connecticut, a spin-off from Yale University formed to develop novel cancer therapeutics. He was senior vice president and general counsel from 2000 to 2008 at Princeton-based Medarex, Inc., a spin-off from Dartmouth College that was developing antibody-based products for the treatment of cancer. Medarex was acquired in 2009 by Bristol-Myers Squibb. At both firms, Middlekauff provided strategic and operational advice on issues related to industry-university partnerships, strategic alliances, intellectual property management, public and private financing, and corporate governance.

In his new position, Middlekauff will advise faculty members and entrepreneurs on issues involving the transition of laboratory-based discoveries to the marketplace either via licensing of the technology to an existing company or via the formation of a start-up company. Although the majority of his experience has been in the area of biotechnology, Middlekauff's corporate and legal experience will also benefit faculty and students from engineering and other disciplines. "Many of the principles of starting a company are independent of the specific technology," Middlekauff said. "I will endeavor to help faculty members put the pieces together, from intellectual property to management to finances."

Prior to joining Medarex, Middlekauff was vice president of business development and general counsel for Algos Pharmaceutical Corp. from 1998 to 2000. He practiced corporate and transactional law for a Palo Alto, California, law firm from 1993 to 1998. He earned his J.D. at Yale Law School and his A.B. in political science at Brown University.