by Susannah Sharpless, Class of 2015

In a lively twist on the academic tradition of festschrift — a collection of writings published in honor of a scholar — colleagues and former students celebrated Joyce Carol Oates with stories and remembrances in Chancellor Green Rotunda on Friday, Nov. 7, before an audience of about 300 Princeton students, faculty and staff, and community members. 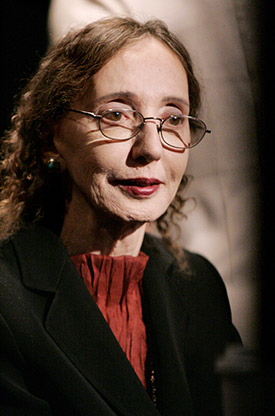 Joyce Carol Oates, the Roger S. Berlind '52 Professor of the Humanities who has taught at Princeton University for 36 years, shares her insights at a gathering — simply called "Fest" — on Friday, Nov. 7, at which former students feted her with stories and remembrances. Oates will retire from full-time teaching at the end of the academic year. (Photo by Frank Wojciechowski)

Oates, the Roger S. Berlind '52 Professor of the Humanities who has taught in the Lewis Center for the Arts' Program in Creative Writing for 36 years, will retire from full-time teaching at the end of the academic year. She will continue to teach a course at Princeton each fall.

Considering that Oates has published more than 100 books, including novels, poetry, short fiction, plays and a memoir, and edited anthologies over a 50-year career — one would think that she would call herself a writer. But at the event — simply called "Fest" — another of Oates' talents was celebrated: teaching.

"Writing is just something that one does," said Oates, who was awarded the National Humanities Medal by President Barack Obama in 2010. "If I have to put it down on some form, I write 'teacher.'"

Ten Princeton alumni, all past students of Oates' who became writers, shared insights and anecdotes that illustrated their former teacher's honesty, enthusiasm and humor — characteristics they said make her as gifted a teacher as she is a writer.

Divided into two 90-minute panels, the writers said that it was Oates' willingness to take them seriously during their undergraduate careers that allowed them to understand themselves as writers.

Many of them had published their senior theses for which Oates had served as adviser.

In the first panel, moderated by Edmund White, a professor of creative writing, Jennifer Anne Kogler, a 2003 alumna, said that when she admitted in Oates' fiction workshop that she was interested in sports and Oates encouraged her to write about it, she was shocked. "It didn’t seem like a serious subject ... but that was the first story I wrote, which turned into my thesis." Later, the thesis turned into her first novel.

Jonathan Safran Foer, a 1999 alumnus whose first novel, "Everything Is Illuminated," also grew out of his thesis, recalled that Oates would emphasize "that most important writerly quality — energy — which is not about pages or books but a certain ambition, a certain sense of self." He now tries to pass this on to his students. "I order classes around giving reasons not to stop writing, which feels like tough love, as our classes often did," he said.

Princeton's writing curriculum and faculty are simultaneously intimidating and inspiring, said Boris Fishman, a member of the Class of 2001. "You're deemed promising enough to be taught by people like Joyce; it's a huge boost, and, frankly, you really need it. It's kept me going for a good number of years beyond Princeton. You can make a whole life out of it."

Julie Sarkissian, a 2005 alumna, joked that Oates is to blame for a recent spate of sleepless nights spent with her new baby. "It was because of Joyce that I went to Princeton, and that's where I met my husband, and hence the baby." She added: "Princeton became my home and has remained such a huge part of my life after I graduated. As simple as it sounds, Joyce was the beacon that drew me here."

Many of the alumni remembered the particular challenges and rewards of being an undergraduate and a writer. "It's weird to be a writer at Princeton where everyone is going off to work on [Wall] Street," said novelist Whitney Terrell, a 1991 alumnus who taught fiction at Princeton as a Hodder Fellow in 2008-09. "And you feel very odd doing it, and your parents might also feel the same way, and it's extremely helpful to have someone like Joyce here so you can say, look at this person, they have books out all the time. ... It gives you a sense that this can be done."

During a break between the panels Nicole Acheampong, a sophomore who is in an advanced fiction workshop with Oates, remarked that "one thing that sticks out from this panel is how funny Professor Oates is, which is what makes her so approachable."

Junior Justin Poser, who is in the same workshop, remarked that no matter how critical Oates is, she's always encouraging. "If she has a very intense criticism it's motivated by, 'here’s how you can fix it,'" he said. "You want to go back and fix those things she pointed out, and be like, 'aha! I did it!'"

Sheila Kohler, a former lecturer in creative writing, moderated the second panel. She told the audience the panelists had written remembrances and sent them in ahead of time, and she facilitated the discussion by prompting each writer to share a story or two.

Panelist Kristiana Kahakauwila, a member of the Class of 2003, praised Oates' enthusiasm in the classroom. "Every piece of student work you saw there was something in it you loved and appreciated, and your ability to adjust and respond to that part of the piece means everything to a 19-year-old."

Oates said that her criticism is indicative of her level of involvement — and excitement — about the work these "really outstanding students" were doing as undergraduates. "As teachers, we are never really, completely honest or candid," she said. "We see what the traffic will bear. When you have a very gifted student then you can be much more candid."

During the second panel, Oates is joined by five other former students as they reflect on their experiences in her writing workshops. From left: Christopher Beha, Class of 2002; Walter Kirn, Class of 1983; Kristiana Kahakauwila, Class of 2003; Pinckney Benedict, Class of 1986; and Jonathan Ames, Class of 1987. (Photo by Frank Wojciechowski)

Oates responded to many of the comments with her sharp, deadpan wit. Walter Kirn of the Class of 1983 recalled being invited by Oates to serve as a bartender at a dinner party at her house. He said they stepped into her study, where Kirn hoped to find her "Orphic connection." He discovered a supremely organized office with "a desk against at least three walls, perhaps four, and she said, 'That's poetry, that's criticism and that's fiction'; there may have been a fourth, for playwriting." Oates wryly called him "a fantasist": She only had two desks, one for writing and one for financial paperwork.

Christopher Beha, a 2002 alumnus, remarked that Oates' classes formed a community. "You felt like you were part of a great tradition of students, and to be made to feel like a part of that lineage was incredibly inspiring."

Pinckney Benedict, a member of the Class of 1986, recalled a "life-changing moment" during his first class with Oates when she suggested he read fellow West Virginia writer Breece D'J Pancake. "That intuitive connection that she made before even knowing me ... I can't imagine what I would be doing or where I would be if that exact thing had not happened at that moment," he said.

Oates expressed her deep enthusiasm for teaching. "Everyone has some story that makes them special," she said. "If you can discover that, that's what makes them interesting."

"Joyce makes a young writer aware of him[self] or herself as a character," Kirn said. "That was her gift to me, and to others: She gives you a sense of yourself, of a figure apart from your subjective and foggy and ill-defined sense of self. She allows you to take your first steps."

"I don’t know what I would have done if I had never met you," Jonathan Ames, a 1987 alumnus, said to Oates. "You changed all of our lives."