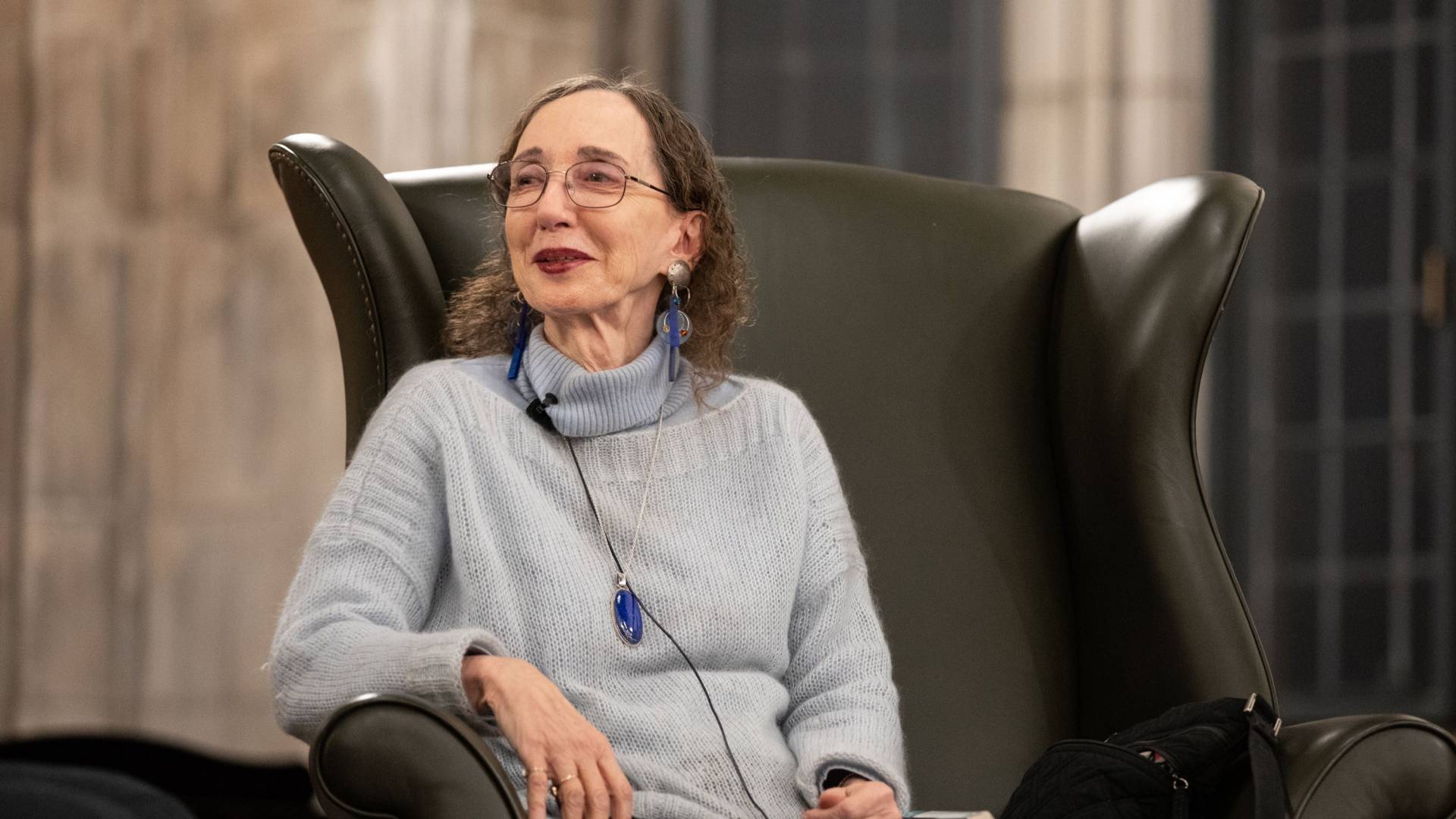 Award-winning author and Princeton professor Joyce Carol Oates recently spoke to seniors during a Last Lecture event on campus. Oates reflected on her career and offered advice to writers.

Award-winning author and Princeton professor Joyce Carol Oates reflected on her decades-long success in the literary world and offered words of advice to Princeton seniors during a Last Lecture event on Thursday, Nov. 29.

Oates, the Roger S. Berlind ’52 Professor in the Humanities Emeritus, is well-known to Princeton students, as she has taught in the creative writing program for 40 years. During the discussion moderated by senior Abhiram Karuppur in the Mathey College Common Room, Oates noted that while writing technology has changed during her years at Princeton, the content of her students’ work has remained fairly similar. However, she pointed out that she now has students of a variety of different backgrounds, and these diverse experiences come through in their writing.

One of the surprising anecdotes Oates shared with the audience was that she received the Lifetime Achievement Award of the International Festival of Literature and Art with Humor in Spain in 2017. Despite being world-renowned for her scary short story “Where Are You Going, Where Have You Been,” she emphasized that it is important for writers and literary works to contain humorous and light-hearted aspects, in order to provide contrast with the heavy and serious events that can occur in everyday life.

Another topic of interest to seniors was how to pursue creative endeavors while simultaneously working full-time or in graduate school. Oates explained that it is often better for interested writers to have a different day job, since it gives them time to take a break from writing and ruminate about many of the ideas bouncing around in their heads.

In addition, Oates discussed one of the prevalent struggles writers have, which is commonly known as “writer’s block.” She explained that some writers utilize the “car in the fog” approach, which means that while the writer may not know how the piece will end, he or she can see where to take the story for the next few paragraphs, and then re-evaluate the story’s direction from there. In contrast, Oates explained that she knows from the outset the general direction the story is going to take, and crafts the intermediate events with the final conclusion in mind.

“You know where you’re going,” she said, in reference to her writing style.

“So you know where you’re going, not where you’ve been?” Karuppur asked. 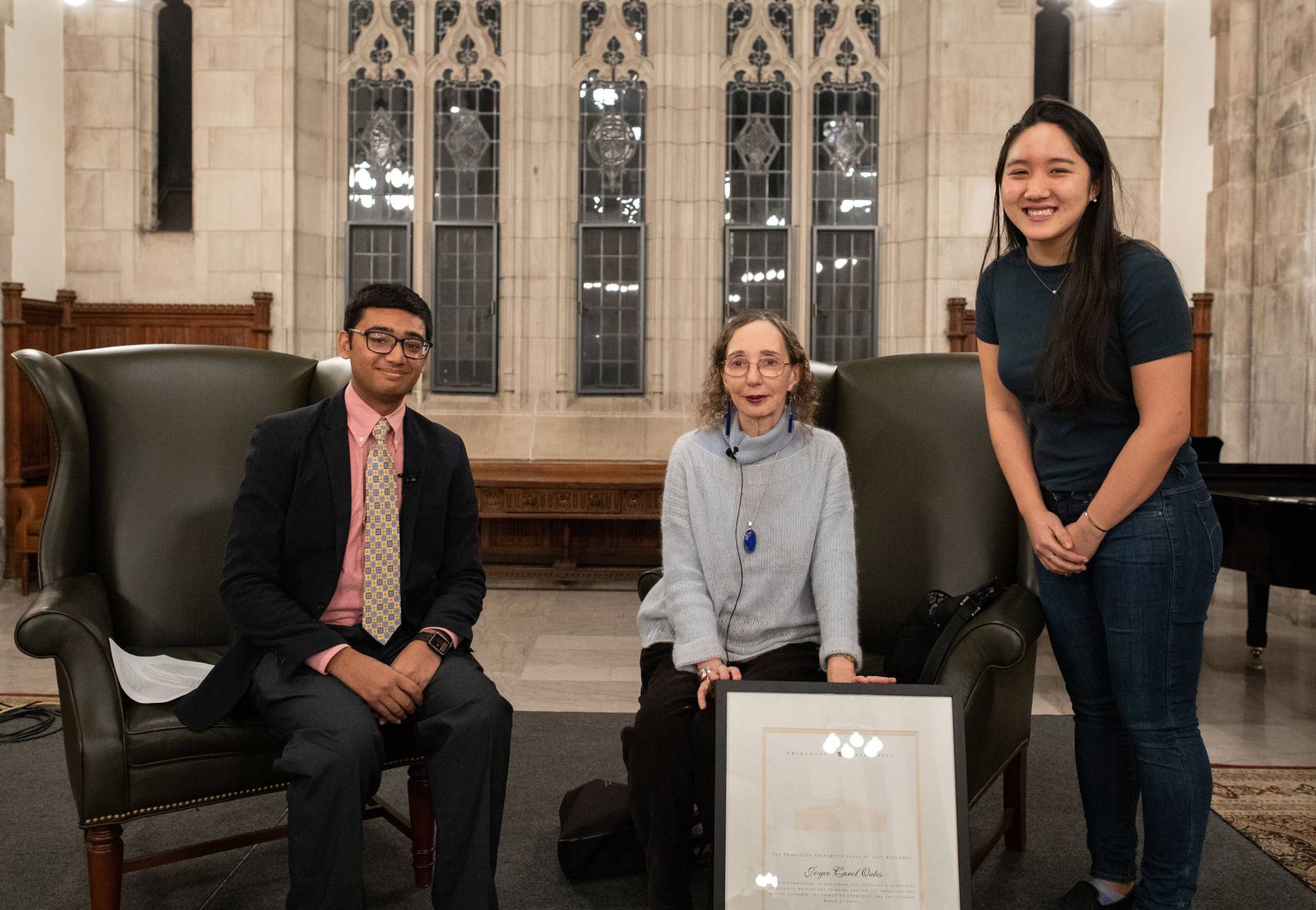 In either approach, Oates explained that it is important to take frequent breaks from writing in order to fully think through one’s ideas and the message that needs to be communicated.

Oates also touched upon the various film adaptations that have been made of her works, complimenting many of the them, but admitting that there were some that she could not bear to watch or be associated with.

In addition, a student in the audience asked Oates about the appropriate use of a pseudonym. Oates replied that pseudonyms can be used when the work could be sensitive to those close to the writer, but she joked that budding writers in the audience should not use her name as a pseudonym.

At the end of the discussion, the Last Lecture Committee surprised Oates by awarding her an honorary class membership, officially inducting her into the Class of 2019. In awarding her the certificate, Karuppur noted that the Class of 2019 wanted to recognize her “commitment to mentoring and fostering a generation of creative writers and thinkers, and for the impact she has had on students, the Princeton community, and the literary world at large.”

Oates said that she was very touched to receive the honor, and that she had “never received anything like it” during her career.

“I’ll definitely attend all the Reunions,” she said.

The Last Lecture series, organized by the senior class’ Commencement Committee, features speakers who can give seniors practical advice on living life to the fullest upon graduation. In addition, the committee organizes “mini-series” events, where students can learn practical skills like learning how to file taxes or negotiate apartment leases. The discussion with Oates is the second event in the series for the Class of 2019. The first lecture was held in early November and featured acclaimed shoe designer Stuart Weitzman.