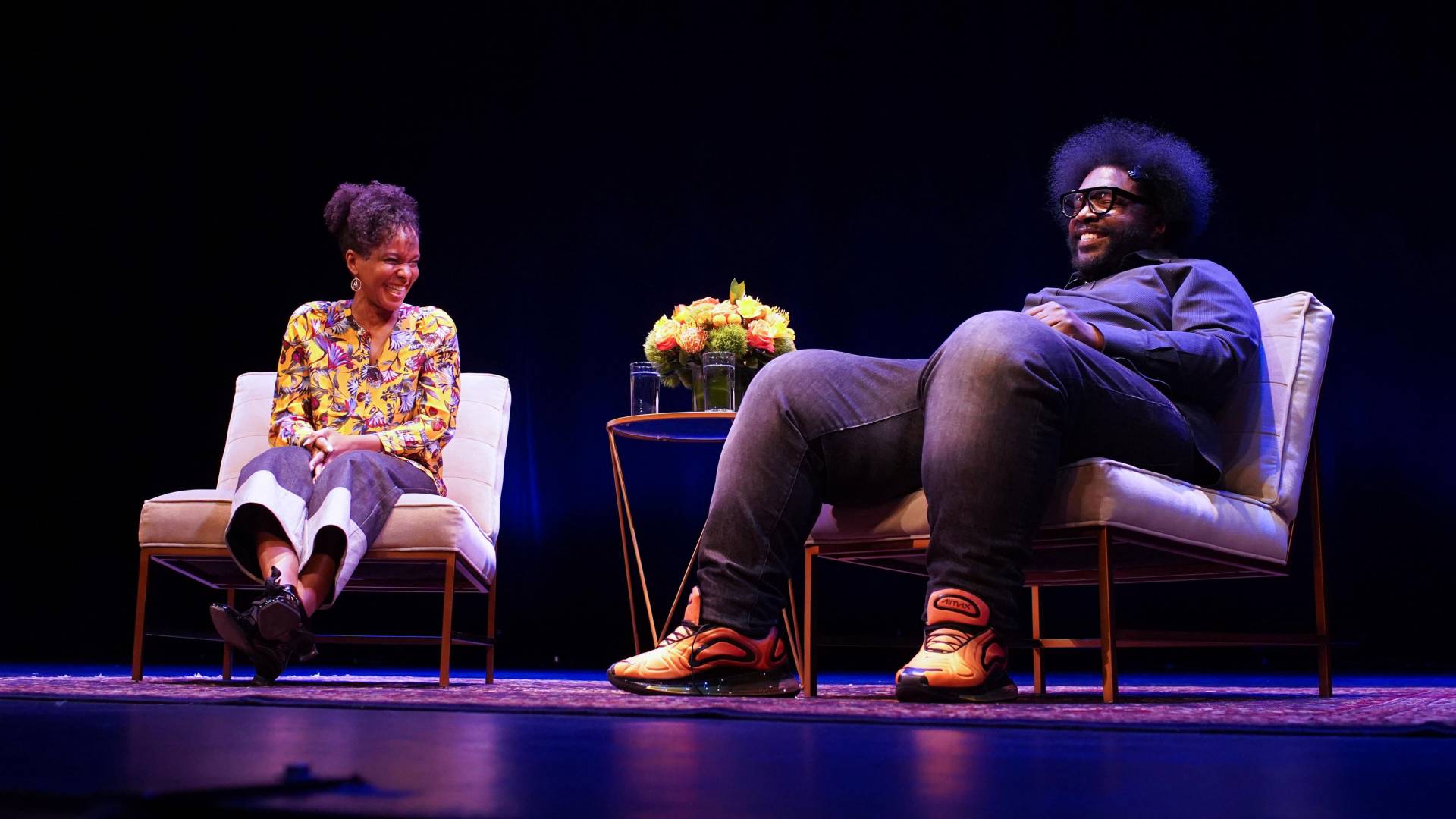 Imani Perry (left), Princeton's Hughes-Rogers Professor of African American Studies, talks with musician and author Questlove about living a creative life during a Feb. 15 event at McCarter Theatre Center. Questlove reflected on his inspiration, his creative process and giving back to his hometown of Philadelphia.

How to live a creative life was the topic of a conversation between musician Questlove and Princeton professor Imani Perry on Feb. 15 at McCarter Theatre Center. The drummer, producer and author discussed the beauty of music, the benefits of boredom and the blocks of West Philadelphia where he grew up.

During the event, Questlove (whose full name is Ahmir Khalib Thompson) was inducted as an honorary member of Princeton’s Class of 2019 and received a framed certificate from senior class officers. The talk was sponsored by the Office of the Dean of Undergraduate Students.

A Grammy-winning musician with the hip-hop band “The Roots,” Questlove also is a producer whose credits include the smash musical “Hamilton.” “The Roots” has been the house band on “The Tonight Show Starring Jimmy Fallon” for 10 years, and Questlove has written best-selling books about music, food and creativity.

“You have exemplified what it means to live a life that’s vastly creative and to have the courage to move into multiple arenas,” said Perry, Princeton’s Hughes-Rogers Professor of African American Studies. “That’s incredibly special, particularly for young people. And it’s inspiring to me as someone who wants to take my writing in new directions as well. Thank you for being that model for us broadly.”

Throughout the conversation, Questlove talked about his inspirations and creative process.

“Once you are creating and you are in a zone, keep that zone,” he advised students, staff, faculty and community members. The audience included students from across the country attending Princeton’s 1vyG conference for low-income and first-generation college students.

“We’re so distracted that we rarely get silence to meditate on good ideas,” he said, pointing to his phone. 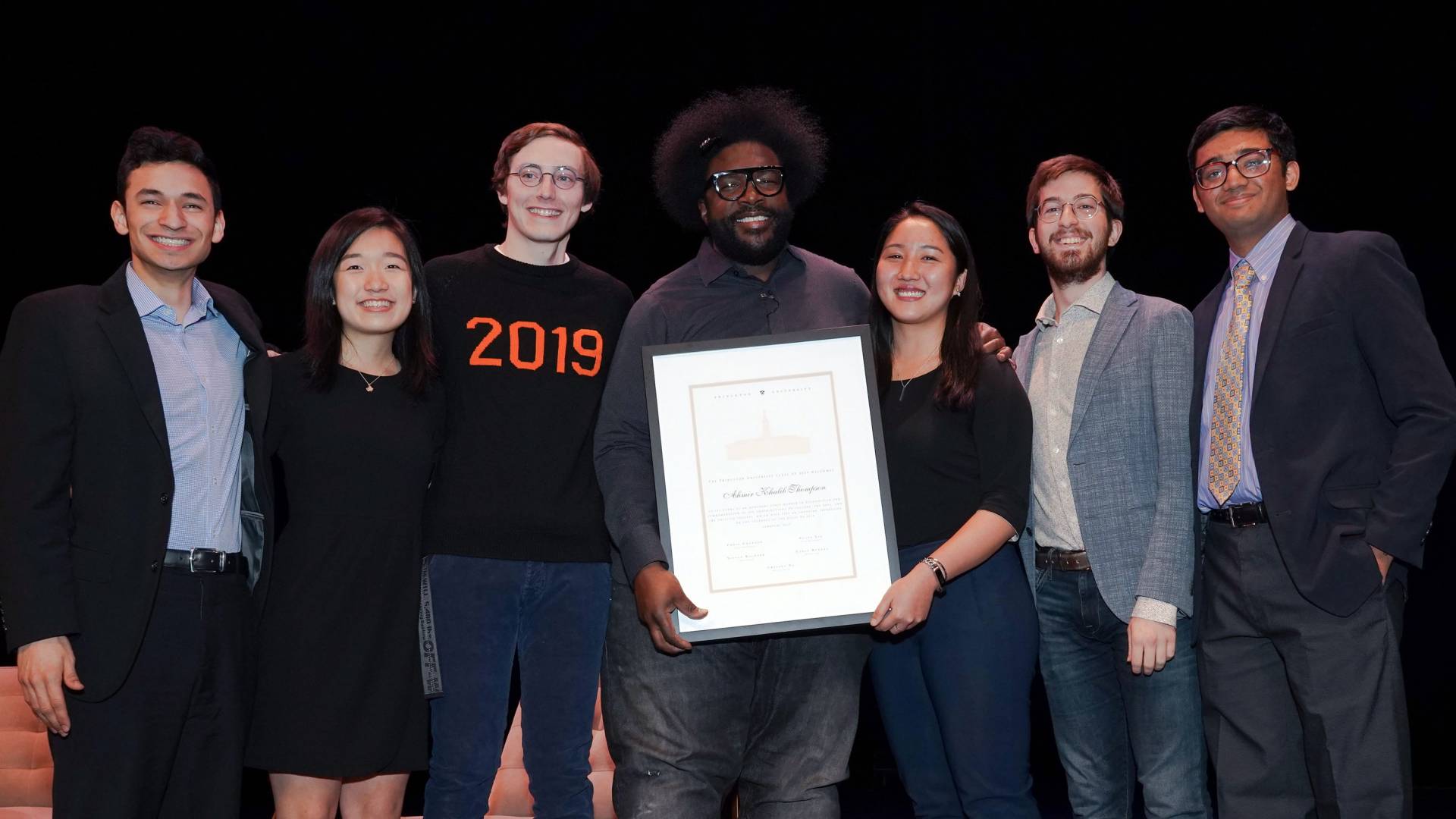 Musician Questlove (center) is inducted as an honorary member of the Class of 2019 by Princeton seniors (from left to right) Chris Umanzor, Susan Liu, Liam Glass, Amy Zhang, Bulut Cakmak and Abhiram Karuppur.

Calling Questlove an encyclopedia of music, Perry asked about the influence of his hometown of Philadelphia.

Questlove recalled growing up on Osage Avenue during the late 1970s and 1980s. He said he was lucky to attend a performing arts elementary school, which happened to be near Philadelphia International Records.

“I remember seeing Teddy Pendergrass drive up in a green Rolls Royce and get mobbed by fans,” Questlove said with a laugh.

Fast forward to the 1990s, Questlove recalled how he and Tariq "Black Thought" Trotter led “The Roots” in weekly jam sessions with emerging Philadelphia artists, later known to the world as Jill Scott, Eve and Musiq Soulchild.

Perry also asked Questlove about his more recent passion for writing. His latest book, “The Creative Quest,” shares wisdom he’s learned about creativity from his own life and from other artists.

“Writing was my escape from my main craft, which is music,” Questlove said.

During a question-and-answer session, Melissa Eustache, a junior at Johns Hopkins University, asked how successful artists can give back to their urban communities. Eustache was at Princeton for the 1vyG conference to learn how other universities support low-income and first-generation students.

Questlove’s answer focused on philanthropy and opportunity. It would be easy to establish a children’s music program or local arts initiative, Questlove said, but he sees a much greater need.

“I’d rather see more scientists, engineers and doctors,” he said. “In my heart, I always felt a true revolutionary act is to ensure that people can have education and get access to the things that I can get every day. … At the end of the day, I’ll be satisfied if I’m able to culturally affect the 5200 block of West Philadelphia where I grew up in somehow or someway.”