Award-winning journalist P. Sainath, whose work focuses on rural India and the plight of its farmers, is teaching two courses for undergraduates this spring in Princeton's Program in South Asian Studies.

Sainath, who was the McGraw Professor of Writing in the Council of the Humanities at the University in 2012-13, is teaching "Reporting Inequality: The Media and the Marginalized," and "Development and Dissent in India-South Asia."

"He is a fantastic speaker, and his students will learn a lot about the principles and practices that define the work of journalism, in particular the obligation to tell the truth, provide news without fear or favor and report on the concerns and problems of all citizens, not merely those who have money, fame and power," said Isabelle Clark-Decès, a professor of anthropology and director of the Program in South Asian Studies, a regional program under the auspices of the Princeton Institute for International and Regional Studies. 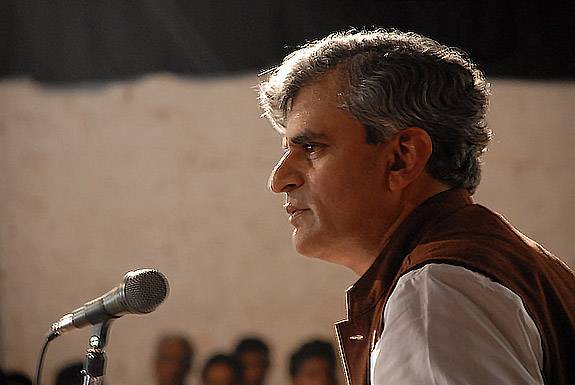 Indian journalist P. Sainath is teaching two courses at Princeton this semester through the Program in South Asian Studies. Sainath's work focuses on rural India and the plight of its farmers. (Photo courtesy of P. Sainath)

Sainath, former rural affairs editor of The Hindu newspaper, has devoted his career to telling the stories of India, addressing social problems, rural affairs, poverty and the aftermath of India's globalization.

Sainath described his work and plans during his time at the University.

Question: What prompted you to pursue journalism?

Answer: Journalism in India, particularly the Indian press, was the child of the country's freedom struggle. Every leader and activist in our battle for independence from the British Empire also doubled up as a journalist. It was their way of connecting with and mobilizing society. I was born into a freedom struggle family. My granddad [V.V. Giri, the fourth president of the Republic of India] spent 14 years in British prisons before India became free. Our values were those of the struggle for independence. As a student of history at the Jawaharlal Nehru University, I also studied that fight for independence at many levels. And like the people of the generation that preceded me, I associated the press with the struggle for freedom. There was no great plan or profound blueprint for becoming a journalist. It happened most naturally.

Q: What kinds of stories are the most rewarding for you to write?

A: In six words: The everyday lives of everyday people. The diversity, complexity, creativity — and the tragedies, too — of everyday life in rural India. We're talking of the world's most complex region, with 833 million people, with 780-plus languages, and unrivaled occupational and cultural diversity. Covering these can be most rewarding, inspiring — and often infuriating.

Q. You have written and spoken extensively about the plight of the farmer in India. Why does this subject captivate you?

A: Since 1995, official data tell us, 300,000 Indian farmers have committed suicide. In the latter half of that period, that was at the rate of one every half hour. That is the largest wave of suicides in one occupational group in recorded human history. This remains the most hurting reporting I've ever had to do, having been to 850 households where suicides have occurred. It destroys you, but it has to be done.

What is compelling is not just the individual tragedies but that these people, most of them, need not have died. The suicides were and are driven not by natural calamity, but by manmade agrarian policies we've adopted as a nation these past 20 years. Small farms are the biggest employers in the world and the producers of most of its food. Small farms are also a civilizational phenomenon in the world we live in. By the way, the farmers of the U.S. Midwest — on a very different scale, context and level — have had and still have more than their share of tragedy and distress. This remains one of the most under-reported stories in your own media. Here, too, it is driven by policy.

Q: In December, you launched PARI, "The People's Archive of Rural India," a website devoted to "the everyday lives of everyday people." Why did you decide to create the website?

A: The media [in India] … have no interest in the lives of everyday people. But that gigantic entity demands coverage, recording, documentation. Some of the finest schools of weaving and pottery and art are in collapse. Over 225 languages have died in the past 50 years, according to the People's Linguistic Survey of India. The largest migrations — often driven by distress — in our history as an independent nation have taken place in the past 10 years and are still occurring. Capturing this is the greatest challenge before reporters in India today. It is not going to happen from the dominant media. The Indian media are politically free, but imprisoned by profit. What they see no revenue in, won't get seriously covered. This is an effort to create what is both a living journal and an archive. It combines video, audio, still photo and text article platforms and is even building an online research library. We hope to let rural India have its many voices heard.

Q: Can you tell me a little bit about the classes you are teaching at Princeton?

A: One is "Reporting Inequality." While both courses have a South Asia-India focus, the one on inequality will look at that phenomenon in other parts of the world. To my mind, inequality is the foremost issue facing most societies. It has grown rapidly in the last 15 to 20 years and with devastating effects.

The other is "Development and Dissent," a burning issue in the poorer nations. Millions of people have been and are being evicted forcibly as states acquire land for projects aimed at development. That is, for mining, special economic zones and the like. There is a huge conflict over resources raising questions over what constitutes development? Who pays the price for it for it?  Why is it the poor and marginalized who lose their land and resources for the "development of the nation"? What are the environmental implications of such models of development?

These courses are aimed at getting students to engage with some of the greatest problems of our time from ground up and not top down.

The full Q&A is available on the website of the Princeton Institute for International and Regional Studies. Sainath will give a public talk titled "Twenty Years After: Inequality, Agrarian Distress and Farm Suicides" at 6:30 p.m. Monday, March 9, in Burr Hall, Room 219.