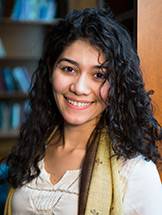 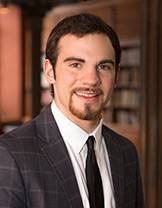 They will be recognized at a luncheon during Alumni Day on campus Saturday, Feb. 21.

Martinez was born in Medellín, Colombia, and came to the United States with her family when she was 10 years old. She attended a public high school in Corona, Queens, in New York City. The summer after her junior year she participated in the Leadership Enterprise for a Diverse America program held at Princeton, a national program dedicated to developing the academic and leadership potential of talented high school students from socioeconomically disadvantaged backgrounds. When time came for Martinez to choose a college, she said she selected Princeton because she was already familiar with the University and because of its generous financial aid package.

A comparative literature concentrator, Martinez is also pursuing certificates in creative writing and Latin American studies. After graduation she hopes either to pursue a Ph.D. in Spanish literature or enter the field of urban studies to work in the nonprofit sector. "I am eager to learn about urban issues that I care about such as youth involvement in the criminal justice system and fair housing rights," she said.

As an immigrant and first-generation college student, Martinez said she sees the Pyne Prize as a reflection of her family's hard work. "They supported and inspired me through this journey," she said. "Princeton has been the biggest blessing I've received in my life thus far. It allowed me to grow as a person, as a scholar, and also as an advocate."

Martinez is a 2013 recipient of a Mellon Mays Undergraduate Fellowship. The Mellon Mays program is supported by the Andrew W. Mellon Foundation and facilitates funding for undergraduate research and graduate school studies to prepare students for professorial careers. The program aims to increase the diversity of faculty at colleges and universities across the country.

For her senior thesis Martinez is writing a book of poetry, satisfying the requirements of her major in comparative literature and her certificate in creative writing. Many of the poems are inspired by the research she completed as an Alex Adam '07 Award recipient from the Lewis Center for the Arts, a grant that enabled her to spend summer 2014 traveling the length of the U.S-Mexico border.

"The purpose of the trip was to write poems as I reflected on my experience as an undocumented immigrant. However, my journey also coincided with the arrival of thousands of refugees from Central America," said Martinez, who also volunteered at migrant shelters for women and children. "The sites I visited and the things I witnessed are now the subject of my creative thesis poems." Martinez currently holds Deferred Action for Childhood Arrivals (DACA) documentation, which is designed for people who came to the United States as children and provides work eligibility authorization.

Her academic work in the Department of Comparative Literature — including the exploration of poetry of violence and trauma "that arises out of the extreme experiences of marginalized groups" — serves as the basis for the critical introduction to her thesis poems.

Martinez has two thesis advisers — Susana Draper, an associate professor of comparative literature; and Tracy K. Smith, a professor of creative writing in the Lewis Center for the Arts and a Pulitzer Prize-winning poet.

Draper, who met Martinez in her course on contemporary Latin American literature, said she ranked Martinez "among the most insightful, self-motivated and diligent undergraduates" in the class.

Smith commended Martinez's "deep social conscience" and her talents as a poet. "Yessica strikes me as the perfect illustration of what four years at Princeton can do for and to a student. She is mature, realized and yet full of still-untapped potential," Smith said.

Outside the classroom, Martinez is a co-director of the Princeton DREAM Team, a student organization that supports undocumented immigrants and debates immigration reform. She is a member of the Latin America Legal Defense Fund, which works with the Princeton Latino community, and the University's Priorities Committee. She also has been involved in the Community-Based Learning Initiative Project and Princeton Latinos Y Amigos.

"Yessica's ongoing commitment to immigration reform is unwavering," said Patrick Caddeau, dean of Forbes College, where Martinez serves as a residential college adviser. "She is extraordinarily generous with the creativity, respect and intellectual precision she brings to the causes, communities and people she champions."

Robertson, of Lombard, Illinois, is a Slavic languages and literatures major who is also pursuing certificates in theater, and Russian, East European and Eurasian studies. His academic honors include Phi Beta Kappa, the Shapiro Prize for Academic Excellence in 2012 and 2013, and the Nicholas Bachko Jr. Scholarship Prize in Slavic Languages and Literatures.

After graduation, he hopes to pursue a master's degree in acting at the Royal Conservatoire of Scotland and plans a career as a professional actor.

Looking back at his time at Princeton, Robertson said: "I never dreamed that my journey would include these incomparable opportunities to grow as a scholar, as an artist and as a man. There is no way to express how much Princeton has meant and will forever continue to mean to this naïve Midwestern boy. And the great honor of the Pyne Prize only makes that job harder."

At Princeton, Robertson, who is affiliated with Rockefeller College, has immersed himself in Princeton's theater community, both academically — in courses and productions at the Lewis Center for the Arts, and outside the classroom — as a member of the improv troupe Quipfire!, the Triangle Club, Theatre Intime and Princeton Shakespeare Company, and as co-host of the student late-night talk show "All-Nighter."

His thesis, tentatively titled "A Wonder Midst the Snow": The Phenomenon of Professional Theater in the Gulag Camps of the Former Komi ASSR," is a study of the officially commissioned theaters of the forced-labor camps of the Soviet Union.

He has traveled to Russia over three summers — in 2012 for the Princeton in St. Petersburg Program, an eight-week Russian language intensive course; in 2013 to Moscow for a Russian language program through American Councils; and in 2014 to the Komi Republic on a Princeton Institute for International and Regional Studies fellowship to conduct research for his senior thesis at former Gulag sites.

His thesis was inspired by a freshman seminar on the Soviet Gulag he took with Deborah Kaple, a research scholar and lecturer in sociology, who is his thesis adviser. Calling his graduate-level mastery of Russian stellar, Kaple commended his scholarship, "throwing himself into a very sophisticated area of study where almost no sources exist in English."

For his theater certificate thesis, Robertson created an original adaptation of the classic Gogol short story "Diary of a Madman" and performed the one-man show "Madman/Robertson" in December 2014 in Whitman College Theater.

"I have no doubt that Jake is going to make his mark in the theatrical world," said Robert Sandberg, lecturer in English, theater and the Lewis Center for the Arts, who served as adviser and collaborator on the production. "Apart from his amazing talent, Jake is just a fine human being," he said.

Robertson also completed Princeton's two-year sequence in Polish. "The very fact that Jake insisted on acquiring a second Slavic language as an undergraduate speaks to his intellectual curiosity and thirst for new challenges," said Mark Pettus, a lecturer in the Department of Slavic Languages and Literatures, who taught the sequence and also taught a survey of Russian poetry, which Robertson took. "Every day in class — absolutely without fail — one can almost watch as he grows and pushes himself further."

Commenting on Robertson's trip to former Gulag sites in northern Russia, including the former Soviet prison colony in Vorkuta, Pettus said, "need I mention the courage required of an undergraduate to undertake a trip like this!"