Students, faculty and staff gathered in the University Chapel on Sunday afternoon for a program of speeches and music in which members of the community reflected on ways to understand and overcome their differences.

In his welcoming remarks, President Christopher L. Eisgruber said he hoped the gathering “will give us a chance to reflect on problems that confront us, on differences that divide us, and on values that we share." 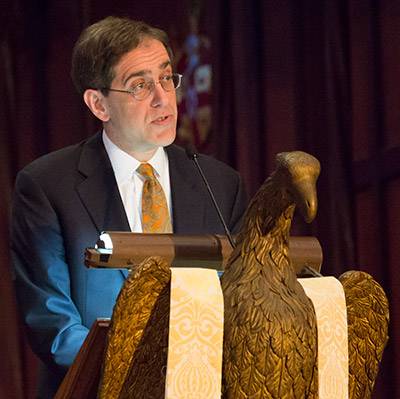 From the lectern, President Christopher L. Eisgruber said Sunday that he hoped a gathering of the University community at the Chapel would help to change the climate on campus so that minority members feel fully welcomed. (Photos by Denise Applewhite, Office of Communications)

"We have a responsibility to expand our perspectives and improve our campus climate, so that minority members of this community feel fully welcomed and so that the anonymous cowards find no fertile ground here for their hatred or their ignorance," he said.

On Thursday, Eisgruber invited the campus community to the program as two controversies swirled on campus and on social media. One involved a since-disbanded student percussion group's performance the previous weekend that many described as racist, and the other related to the student government's booking of a rap singer whose lyrics have been described as homophobic and misogynistic.

"Eruptions of hostile and thoughtless comments on YikYak have left many of our black students, and our LGBTQ students, feeling anguished, angry and unwelcomed on this campus," Eisgruber said. "These hateful comments have no place at Princeton. The anonymous cowards who post these messages debase all of us with their ignorance and contempt."

Eisgruber was followed by a number of faculty, staff and student speakers addressing various aspects of their experiences interacting on campus with others with different viewpoints and backgrounds. 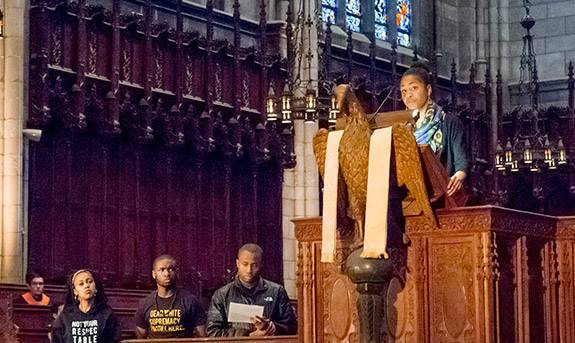 As fellow students stand beside the lectern, junior Naimah Hakim addresses the audience at the University Chapel. She and the other students read a manifesto demanding that the University respond to the concerns of students of color.

One of the student speakers, junior Naimah Hakim, said she spoke on behalf of "students who are sick and tired of being sick and tired" over the racism and violence that students of color experience on campus. "We demand change," she said as she and four other black students took turns reading a manifesto that the University meet their calls for dignity, honesty, respect, accountability and an end to hate speech.

As they spoke, other students stood in the center aisle to hold up signs protesting racism and hate speech. Once the reading of the manifesto was completed, the students — about 40 in all — left the chapel while saying in unison, "Hate speech is not free speech!"

Students hold signs of protest in the center aisle at the University Chapel.

In addition to the speakers, the gathering had quieter moments, too. Freshman Solene Le Van played a moving solo on violin. The Chapel Choir performed twice, including a plaintive rendition of "Sound Over All Waters" with sophomore soloist Alice Frederick singing, "The dark night is over, and the dawn has begun."

Alison Boden, dean of religious life and of the chapel, presided at the service and invited attendees to take part in follow-up discussions immediately afterward. 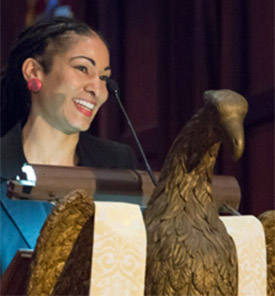 Ruha Benjamin, an assistant professor of African American Studies, relates the story of how her father learned to walk again after suffering a stroke. "Any type of healing requires that we move beyond what is comfortable and what we do well,” she said.

The principal theme of the speakers was the importance of overcoming differences and strife by making efforts to understand others and their perspectives and taking constructive actions to effect change.

"Try to understand why those around you think differently," sophomore Jacob Cannon said. Rather than lashing out against others anonymously through social media, Cannon urged students to engage with others personally. "This is hard, and it requires time and energy."

"What we also need, perhaps most of all, is a more informed knowledge of others," said William Gleason, a professor of English and chair of the Department of English.

Lina Saud, a senior, decried stereotyping, including the demeaning remarks she hears because she wears a head scarf. She recommended that people not just tolerate but embrace one another. "It's getting to know one another in a real way," she said. "Sit with them and talk with them. Ask them questions" about their background and perspectives.

When offensive comments are made or offensive performances are conducted, "don't sit by and watch," said graduate student Eric Glover. "Call them out. Hold them accountable." 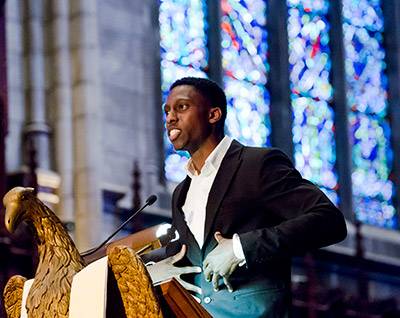 Isaac Serwanga of the Department of Athletics staff speaks about his days as a Princeton student in the Class of 2013. He urged students to stay positive as they seek to effect change on campus.

Ruha Benjamin, an assistant professor of African American Studies, said society in 2015 is failing "to look history squarely in the face" and confront racism and sexism. "We're putting off until tomorrow what should have been addressed yesterday," she said.

Discussing ways to heal, she linked social paralysis to physical paralysis. She told the story of how her father learned to walk again after his left side had been disabled by a stroke. "Any type of healing requires that we move beyond what is comfortable and what we do well."

Isaac Serwanga, a Department of Athletics administrator, recalled his years as Princeton student in the Class of 2013 when he and African American male athletes sat in locker rooms and wished the campus climate would change.

"I realized I spent a lot of time complaining and not a lot of doing," Serwanga said, urging students to seek change by using a positive and mindful approach.  "You have to use your emotional power, and focus," he said. 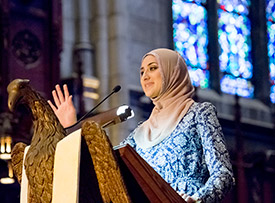 Lina Saud, a senior, gestures while speaking to the University Chapel audience.

Eisgruber noted that over the past week, he talked with many people about the controversies on campus. "I have been struck by many observations in the course of those conversations," he said. "I have been impressed, for example, by how much people on this campus love this University, and how much they want it to be a better and welcoming place.

"But I have also been startled by the tremendous gap in perspectives — how differently people see things. Those of us in the majority culture often do not see the thoughtlessness or the insults borne by others.  And we do not appreciate the feelings of exclusion that result. We have a responsibility to change that.

"I hope that today’s gathering can contribute to the change that we need," he said. 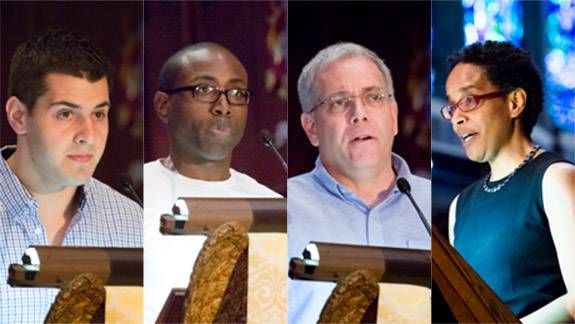 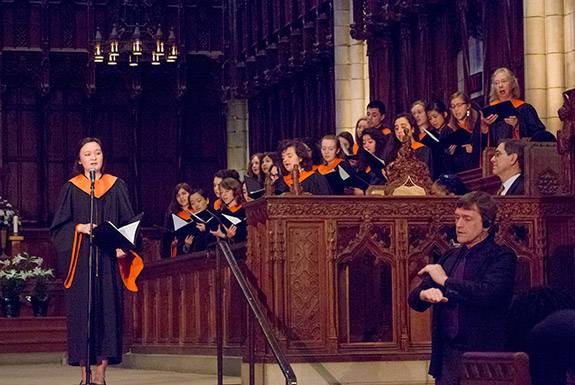 Soloist Alice Frederick, a sophomore, sings during a rendition of “Sound Over All Waters” by the Chapel Choir. President Eisgruber listens at right, behind a sign language interpreter in the foreground.