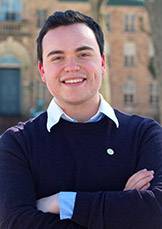 Princeton University junior Thomas Gonzalez Roberts has been awarded a 2015 Truman Scholarship, which provides up to $30,000 for graduate study.

The award, which was given to 58 students among 688 candidates nationwide, "recognizes college juniors with exceptional leadership potential who are committed to careers in government, the nonprofit or advocacy sectors, education or elsewhere in the public service," according to the Truman Scholarship Foundation.

Roberts, who is from Morris, Minnesota, is majoring in astrophysical sciences and plans to pursue a master's degree in public policy focused on international and global affairs. He hopes to work in the White House Office of Science and Technology Policy's (OSTP) National Security and International Affairs division. Roberts is interested in establishing standards for international agreements and peace related to space exploration. Roberts, who studies Russian at Princeton, envisions international research collaboration as a key to peaceful policies among the world's "space powers," particularly the United States, Russia, China and the European Union.

"Currently there is no code of outer space conduct among the major space powers," Roberts said in his Truman application. "Without the responsible development of norms of outer-space behavior, competition in aeronautical capabilities between states may grow to include nuclear activity that threatens global security."

Roberts plans to use his Truman Scholarship to attend Harvard University's John F. Kennedy School of Government where he could lend his background in computational astrophysics and Russian to the school's Defense and Intelligence Project and US-Russia Initiative to Prevent Nuclear Terrorism.

Roberts is co-chair for Community Action at Princeton, which engages first-year students in community service, and is an orientation representative for the University's Pace Center for Civic Engagement. Fluent in Spanish, Roberts also is an ESL instructor in Princeton.

The Truman Scholarship Foundation was established by Congress in 1975 as the federal memorial to the 33rd president. There have been 3,023 Truman Scholars selected since the first awards were made in 1977. The 2015 Truman Scholars will receive their awards May 24 during a ceremony at the Truman Library in Independence, Missouri.