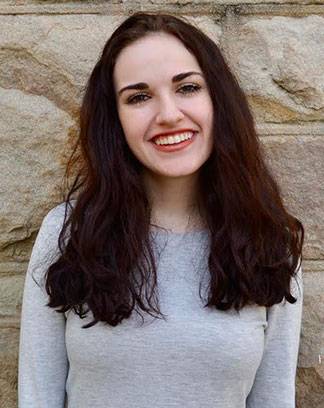 Princeton University junior Miranda Rosen has been awarded a 2017 Truman Scholarship, which provides up to $30,000 toward graduate school and the opportunity to participate in professional development programs to prepare for careers in public service.

The award, which was given this year to 62 students among 768 candidates nationwide, "recognizes college juniors with exceptional leadership potential who are committed to careers in government, the nonprofit or advocacy sectors, education or elsewhere in the public service," according to the Truman Scholarship Foundation.

Rosen, a history major from Henderson, Nevada, who is pursuing certificates in Judaic studies and European cultural studies, plans to use the scholarship to pursue a law degree with a focus on civil rights and anti-discrimination law. "My vision is to ensure an equal playing field for all Americans," Rosen wrote in her application. "I aim to fight for women's rights by eradicating the legal and societal barriers that keep them from realizing true equality. We must mend these problems in the employment industry, as when we treat women equally at work, we will see changes concerning their equality in broader American culture as well."

This summer, Rosen will be an intern at the Congressional Research Service (CRS), a legislative branch agency within the Library of Congress. Before entering her graduate program, Rosen would like to pursue an internship at the National Organization of Women in government relations and public policy and hopes eventually to work as a trial attorney and advocate for the U.S. Equal Employment Opportunity Commission. "The commission is only one of the avenues that the average worker can access to gain redress, and I want to closely work with individuals as their advocate to assure them of the proper treatment they deserve," she said. "The Truman Scholarship will help me in invaluable ways to reach my goal of creating a more equal country through fighting injustice and discrimination."

While a Princeton student, Rosen has held three internships: in the office of Sen. Harry Reid; at the Anti-Defamation League; and for Professor George Philander, the Knox Taylor Professor of Geosciences.

A member of Rockefeller College, Rosen has served as U-Councilor and executive committee chair in the Undergraduate Student Government (USG), executive committee member of the Council of the Princeton University Community, tournament director and social chair of the Princeton Debate Panel, founder and chair of the USG Women's Leadership Task Force, vice president of Chabad on Campus, co-chair of the Rockefeller College Council, recruitment chair and social programming chair of the Center for Jewish Life student board, and an Orientation leader for Community Action.

Among her other activities, she is a member of the Princeton Club Sailing Team and an editor for the Princeton Historical Review. She also was co-director of publicity for the American Whig-Cliosophic Society.

The Truman Scholarship Foundation was established by Congress in 1975 as the federal memorial to the 33rd president. The 2017 scholars will receive their awards in a ceremony at the Harry S. Truman Presidential Library and Museum in Independence, Missouri, on May 28.