During the past decade, Antarctica's massive ice sheet lost twice the amount of ice in its western portion compared with what it accumulated in the east, according to Princeton University researchers who came to one overall conclusion — the southern continent's ice cap is melting ever faster.

The researchers "weighed" Antarctica's ice sheet using gravitational satellite data and found that from 2003 to 2014, the ice sheet lost 92 billion tons of ice per year, the researchers report in the journal Earth and Planetary Science Letters. If stacked on the island of Manhattan, that amount of ice would be more than a mile high — more than five times the height of the Empire State Building.

The vast majority of that loss was from West Antarctica, which is the smaller of the continent's two main regions and abuts the Antarctic Peninsula that winds up toward South America. Since 2008, ice loss from West Antarctica's unstable glaciers doubled from an average annual loss of 121 billion tons of ice to twice that by 2014, the researchers found. The ice sheet on East Antarctica, the continent's much larger and overall more stable region, thickened during that same time, but only accumulated half the amount of ice lost from the west, the researchers reported.

"We have a solution that is very solid, very detailed and unambiguous," said co-author Frederik Simons, a Princeton associate professor of geosciences. "A decade of gravity analysis alone cannot force you to take a position on this ice loss being due to anthropogenic global warming. All we have done is take the balance of the ice on Antarctica and found that it is melting — there is no doubt. But with the rapidly accelerating rates at which the ice is melting, and in the light of all the other, well-publicized lines of evidence, most scientists would be hard pressed to find mechanisms that do not include human-made climate change." 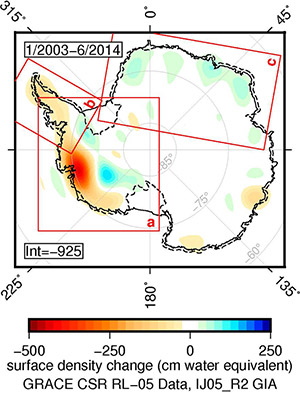 Princeton University researchers "weighed" Antarctica's ice sheet using gravitational satellite data and found that during the past decade, Antarctica's massive ice sheet lost twice the amount of ice in its western portion compared to what it accumulated in the east. The researchers used monthly data from GRACE, or the Gravity Recovery and Climate Experiment, a dual-satellite mission that measures gravity changes; as Antarctic land ice melts, the reduction in ice mass is picked up by GRACE. In the past 11 years, the Antarctic ice sheet lost 92 billion tons of ice per year, which, if stacked on the island of Manhattan, would be more than a mile high — more than five times the height of the Empire State Building. As shown in the figure above, from Jan. 2003 to June 2014, the vast majority of ice loss was from West Antarctica's Amundsen Sea region (box a) and the Antarctic Peninsula (box b) that winds up toward South America. The ice sheet on East Antarctica (box c) primarily thickened during that same time. The color scale indicates mass — equivalent to centimeters of water — of the land ice, with red denoting the largest loss and blue standing for the largest gain. (Image by Christopher Harig, Department of Geosciences)

Compared to other types of data, the Princeton study shows that ice is melting from West Antarctica at a far greater rate than was previously known and that the western ice sheet is much more unstable compared to other regions of the continent, said first author Christopher Harig, a Princeton postdoctoral research associate in geosciences. Overall, ice-loss rates from all of Antarctica increased by 6 billion tons per year each year during the 11-year period the researchers examined. The melting rate from West Antarctica, however, grew by 18 billion tons per year every year, Harig and Simons found. Accelerations in ice loss are measured in tons per year, per year, or tons per year squared.

Of most concern, Harig said, is that this massive and accelerating loss occurred along West Antarctica's Amundsen Sea, particularly Pine Island and the Thwaites Glacier, where heavy losses had already been recorded. An iceberg more than 2,000 square miles in size broke off from the Thwaites Glacier in 2002.

In Antarctica, it's the ocean currents rather than air temperatures that melt the ice, and melted land ice contributes to higher sea levels in a way that melting icebergs don't, Harig said. As the ocean warms, floating ice shelves melt and can no longer hold back the land ice.

"The fact that West Antarctic ice-melt is still accelerating is a big deal because it's increasing its contribution to sea-level rise," Harig said. "It really has potential to be a runaway problem. It has come to the point that if we continue losing mass in those areas, the loss can generate a self-reinforcing feedback whereby we will be losing more and more ice, ultimately raising sea levels by tens of feet."

The Princeton study differs from existing approaches to measuring Antarctic ice loss in that it derives from the only satellite data that measure the mass of ice rather than its volume, which is more typical, Simons explained. He and Harig included monthly data from GRACE, or the Gravity Recovery and Climate Experiment, a dual-satellite joint mission between NASA and the German Aerospace Center. GRACE measures gravity changes to determine the time-variable behavior of various components in the Earth's mass system such as ocean currents, earthquake-induced changes and melting ice. Launched in 2002, the GRACE satellites are expected to be retired by 2016 with the first of two anticipated replacement missions scheduled for 2017.

While the volume of an ice sheet — or how much space it takes up — is also crucial information, it can change without affecting the amount of ice that is present, Simons explained. Snow and ice, for instance, compact under their own weight so that to the lasers that are bounced off the ice's surface to determine volume, there appears to be a reduction in the amount of ice, Simons said. Mass or weight, on the other hand, changes when ice is actually redistributed and lost.

Simons equated the difference between measuring ice volume and mass to a person weighing himself by only looking in the mirror instead of standing on a scale.

"You shouldn't only look at the ice volume — you should also weigh it to find the mass changes," Simons said. "But there isn't going to be a whole lot of research of this type coming up because the GRACE satellites are on their last legs. This could be the last statement of this kind on these kinds of data for a long time. There may be a significant data gap during which the only monitoring available will not be by 'weighing' but by 'looking' via laser or radar altimetry, photogrammetry or field studies."

Harig and Simons developed a unique data-analysis method that allowed them to separate GRACE data by specific Antarctic regions. Because the ice sheet behaves differently in different areas, a continent-wide view would provide a general sense of how all of the ice mass, taken together, has changed, but exclude finer-scale geographical detail and temporal fluctuations. They recently published a paper about their computational methods in the magazine EOS, Transactions of the American Geophysical Union, and used a similar method for a 2012 paper published in the Proceedings of the National Academy of Sciences that revealed sharper-than-ever details about Greenland's accelerating loss of its massive ice sheet.

Robert Kopp, a Rutgers University associate professor of earth and planetary sciences and associate director of the Rutgers Energy Institute, said the analysis method Harig and Simons developed allowed them to capture a view of regional Antarctic ice loss "more accurately than previous approaches." Beyond the recent paper, Harig and Simons' method could be important for testing models of Antarctic ice-sheet stability developed by other researchers, he said.

"The notable feature of this research is the power of their method to resolve regions geographically in gravity data," Kopp said. "I expect that [their] technique will be an important part of monitoring future changes in the ice sheet and testing such models."

The paper, "Accelerated West Antarctic ice mass loss continues to outpace East Antarctic gains," was published in the April 1 edition of Earth and Planetary Science Letters. The research was supported by the National Science Foundation (grant nos. PLR-1245788 and EAR-1014606).