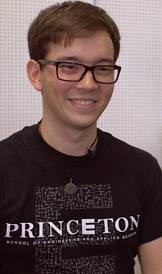 Princeton University graduate student Warren Rieutort-Louis studies electrical engineering and pursues a host of musical activities on campus. In this video, he discusses how his interests inspire him to think creatively.

This week, News at Princeton is focusing on graduate students, a diverse community of nearly 2,700 master's and doctoral students, with stories on the resident graduate student program (Monday), a student pursuing engineering and music (Wednesday), and an art and archaeology class's recent trip to Utah (Friday).

Princeton graduate student Warren Rieutort-Louis' twin passions are engineering and music, and over the last few years he has been able to delve fully into both areas of interest.

"The opportunity to span the disciplines of electronic materials, devices, circuits and systems within my Ph.D. work is very unique and the result of the strong ethic of collaboration between research groups at Princeton," Rieutort-Louis said.

Rieutort-Louis works in the micro/nano fabrication laboratory in the Princeton Institute for the Science and Technology of Materials (PRISM). He wears a full-body suit when working in the lab in order to prevent contamination, as even the smallest particles or dust in the air could render the small electronic devices being built inoperable. There, Rieutort-Louis designs and analyzes hybrid systems of semiconductor circuits and thin-film electronics that have applications ranging from displays and energy harvesting to energy-efficient sensor networks and interactive spaces.

"I've always had a very big interest in electronics from quite a young age, and this project that I'm working on requires the ability to make devices that are very small, on the orders on micrometers or nanometers, which is much smaller than the dimension of a human hair," he said. "You can build these really cool systems that are dense and so powerful."

Rieutort-Louis talks about how both engineering and music have shaped his experience as a graduate student. (Video by Danielle Alio, Office of Communications)

Rieutort-Louis has enjoyed teaching at Princeton, and is a graduate teaching fellow at the McGraw Center for Teaching and Learning, as well as the recipient of a 2014-15 Princeton Harold W. Dodds Honorific Fellowship, which provides funding to students displaying the highest scholarly excellence in graduate work during the year. In 2013-14, the Andlinger Center for Energy and the Environment selected him as a recipient of the Maeder Graduate Fellowship in Energy and the Environment, which is awarded to students whose research displays the highest potential for success in ensuring a sustainable energy future.

Last summer, he was the first graduate student to take part in an exchange with the University of Tokyo to work in the lab of Professor Takao Someya, a Princeton Global Scholar, as part of a new strategic partnership with the University of Tokyo. "Conducting research in Tokyo on large-area organic electronics, a field directly analogous to mine, was a fascinating opportunity to extend my research but also an incredible deep dive into Japanese culture, society and industry," Rieutort-Louis said.

Rieutort-Louis, who earned bachelor's and master's degrees at the University of Cambridge before arriving at Princeton, has also found a number of ways to participate in the University's vibrant arts community.

"After taking my general exams, there was an opportunity to take a course in conducting through the music department," Rieutort-Louis said. "Taking that course introduced me to many contacts in the musical field at Princeton."

Rieutort-Louis' interests sometimes inform one another — he said he has used his knowledge of engineering to better understand the theoretical underpinnings of music. He's also discovered that engineering systems and musical compositions have structural similarities — theory and application combine to form a complex, interconnected product that is greater than the parts.

After graduation, Rieutort-Louis will join Apple Inc. as a display panel design engineer.

"I'm looking forward to next year moving to California to continue my time in the U.S. I'll be moving to Silicon Valley and taking a job at Apple for which I am incredibly thankful for," Rieutort-Louis said. "The job was found through my network at Princeton, through the connections in our department and through our advisers. It's something I'll forever be grateful for to Princeton."