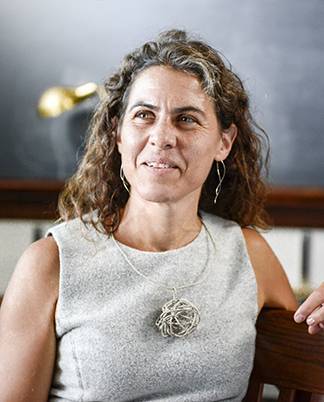 Marina Rustow, the Khedouri A. Zilkha Professor of Jewish Civilization in the Near East and Professor of History at Princeton University, has been awarded a 2015 MacArthur Fellowship.

Rustow is among 24 scientists, artists, scholars and activists who each will receive $625,000 no-strings-attached grants over a five-year period from the John D. and Catherine T. MacArthur Foundation. The MacArthur Fellows Program awards unrestricted fellowships to talented individuals who have shown extraordinary originality and dedication in their creative pursuits and a marked capacity for self-direction. There are three criteria for selection of fellows: exceptional creativity, promise for important future advances based on a track record of significant accomplishment, and potential for the fellowship to facilitate subsequent creative work.

Rustow's area of specialization is the medieval Middle East, particularly texts from the Cairo Geniza, a cache of more than 300,000 folio pages of legal documents, letters and literary materials that span more than a millennium and were preserved in an Egyptian synagogue. They now reside in about 200 library and private collections around the world.

"Marina Rustow is an extraordinary scholar whose groundbreaking research provides fascinating insights into the politics and society of the medieval Middle East," said Princeton University President Christopher L. Eisgruber. "We feel fortunate that she is at Princeton, and we are delighted by the news of her selection as a MacArthur Fellow."

Rustow joined the faculty this summer from Johns Hopkins University, where she had been an associate professor since 2010. Rustow previously taught at Emory University.

In its announcement, the MacArthur Foundation cited Rustow for research on the Geniza texts "that shed new light on Jewish life and on the broader society of the medieval Middle East. Rustow's approach to this archive goes beyond decoding documents, in itself a formidable task, to questioning the relationship between subjects and medieval states and asking what that relationship tells us about power and the negotiation of religious boundaries."

Rustow used information from the Geniza for her 2008 book "Heresy and the Politics of Community: The Jews of the Fatimid Caliphate," sparking her interest in further study of the manuscripts' importance.

She is working a book on Fatimid documents of state preserved in the Geniza. According to the MacArthur citation, Rustow is "deploying her considerable prowess in languages, social history and papyrology ... rewriting our understanding of medieval Jewish life and transforming the historical study of the Fatimid empire."

Rustow received the call about the award while she was running errands with her 4-year-old daughter — and at first thought it was bad news. "It started with: 'Are you in a place where you can have a confidential conversation?' When they told me I had gotten a MacArthur, it was hard for me to comprehend what I was hearing. It was like it was happening to someone else," she said.

"What I love most about my work is the moment when I've finished deciphering a set of documents, and there's the possibility of discovering something new, or some overlooked detail that unlocks a bigger problem," said Rustow, who is also director of the Princeton Geniza Lab. "Not every new piece of information about the past is worth knowing, but sometimes you hit on something that solves a problem, or poses a problem you hadn't considered before."

Rustow said: "I feel a sense of responsibility to train people in the field and keep it alive, so there's nothing more gratifying than watching students become independent scholars. What I find most rewarding is the moment when I see my students reach a degree of control over the manuscript material where they're teaching me new things about it."

Another MacArthur recipient this year, Mimi Lien, taught Princeton Atelier courses in 2008 and 2012 and designed two past Program in Theater productions.