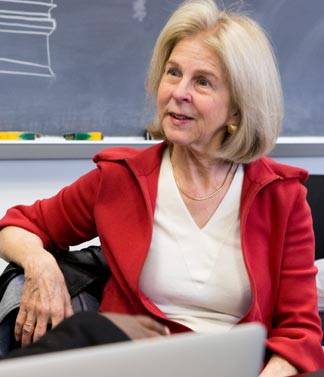 Elaine Pagels, the Harrington Spear Paine Foundation Professor of Religion, facilitates a discussion in the freshman seminar "Who Was — or Is — Jesus?" The class examines the life of Jesus using sources that span from ancient texts to contemporary writings, film, music and art.

What might American filmmaker Martin Scorsese, Russian-French painter Marc Chagall and English poet John Donne have in common? Plenty, if you are examining the life of Jesus.

On a recent Tuesday afternoon, as 14 Princeton students settled around a long table in a room in McCormick Hall for the freshman seminar "Who Is — Or Was — Jesus?", a clip from Scorsese's 1988 film "The Last Temptation of Christ" was being projected against one wall. With a long scraggly beard, his bones practically poking through his tattered clothing, Willem Dafoe, the actor playing Jesus, was pressing mud on the closed eyes of one of his followers — healing his blindness.

The topic of the afternoon was "Miracles/Healings: Did miracles happen? Do they now?" 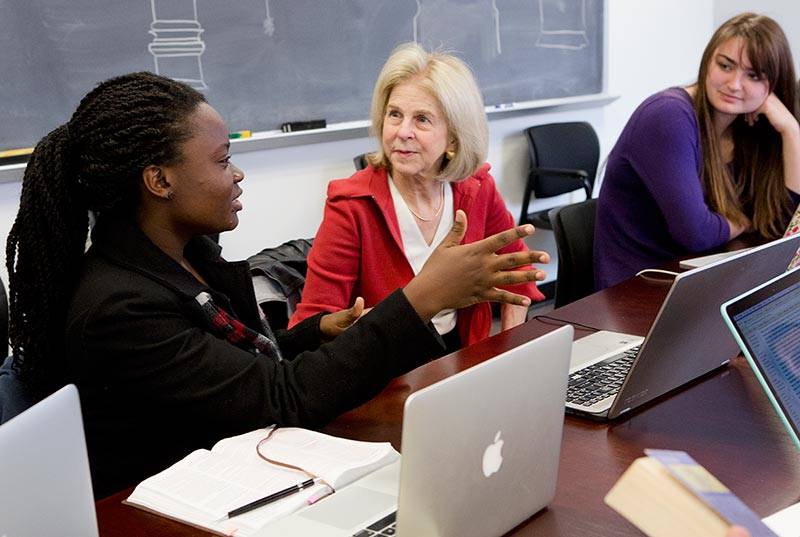 Emmanuella Kyei Manu (left), Pagels and Madeline Pollack participate in a lively discussion where students share ideas, observations and questions about the different ways that stories of miracles are depicted in the readings.

As an energetic discussion began about the readings for that class — starting with passages from the gospels according to Mark, Matthew, Luke and John — the students' questions careened around the table.

"Who Was — Or Is — Jesus?," taught by Elaine Pagels, the Harrington Spear Paine Foundation Professor of Religion, uses a variety of sources to examine the life of Jesus from the earliest, ancient primary sources about Jesus — the "gospel" accounts, including the four accounts of Jesus' life that "made the cut" into the New Testament, to contemporary Christian and non-Christian interpretations such as Dennis Covington's "Salvation on Sand Mountain," Victor Frankl's "Man's Search for Meaning" and E.P. Sanders' "The Historical Figure of Jesus."

This is the first time Pagels has taught this seminar. "I chose this topic because I would have loved to have this course when I was in college — but there was nothing like it! [It] starts by asking what we know about Jesus historically, and then goes into art, music, poems, film — an enormous range from which to choose," she said.

Readings draw from philosophy to poetry and literature — Friedrich Nietzsche, Langston Hughes, Leo Tolstoy, and more. Students also view works of art such as Chagall's crucifixion paintings and listen to recordings such as John Coltrane's studio album "A Love Supreme." 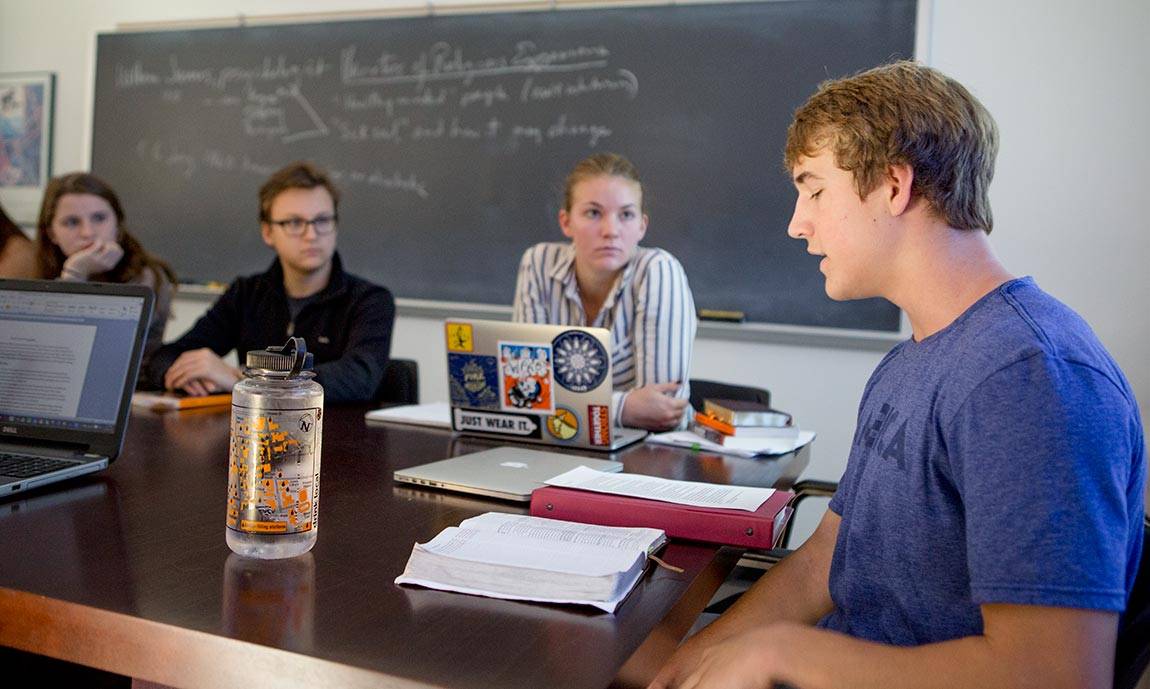 At each weekly class meeting, one student leads off with an in-depth examination of an assigned reading. David Bowman, foreground, reads an excerpt from the New International Version Bible, as Caterina Golner (left), Jacob Tyles and Emmy Bender listen.

Just ask: The power of questions

Asking questions is the operative mode in this seminar. Even the weekly topics on the syllabus take the form of questions: Was Jesus an actual historical person? What did Jesus teach? Jesus was betrayed, arrested, tried and sentenced to death — why? Resurrection — what happens when we die? Who said they saw Jesus "raised from the dead"?

As students discussed the New Testament passages with exacting detail, they posed more questions and answered each other with questions: "Why does it seem Jesus lost his strength when one of his followers touched his cloak?" "Is wearing the cloak giving him power?" "What was Mark's intention to include that detail?" One student offered: "It shows the contrast between his humanity and his divine power."

"Jesus says, 'You're healed when I put mud on your eyes.' Does Jesus need to touch someone to heal them?" Another student jumped in, recounting a story in which Jesus heals without touching the person at all.

Pagels nodded vigorously, as if emphasizing that the more confusion there was, the better.

"The various texts say different things," she told the students. "According to Mark, Jesus' spiritual identity is secret, but the healings offer proof that he as been given divine power. So when he says 'I have [that] authority,' some of the people hearing that are shocked."

Pagels, a historian who joined the Princeton faculty in 1982, has published widely on Gnosticism and early Christianity including "The Gnostic Gospels," and The New York Times bestseller "Beyond Belief: The Secret Gospel of Thomas."

She shared her own challenges about reading primary sources with the students. "When I teach a course, I have to read naively, as if I don't know the other stories. In some places, the same saying may have been written down in opposite ways. [Imagine] you're reading it in the first century or perhaps hearing it told since at that time many people hearing him likely were illiterate."

She said she hopes the seminar will "open up students' thinking to see connections throughout history, and how, for 2,000 years so far, people have been interpreting Jesus in terms of their own situations, cultures and questions — and how questions about religion and God reflect and relate to each person's life." 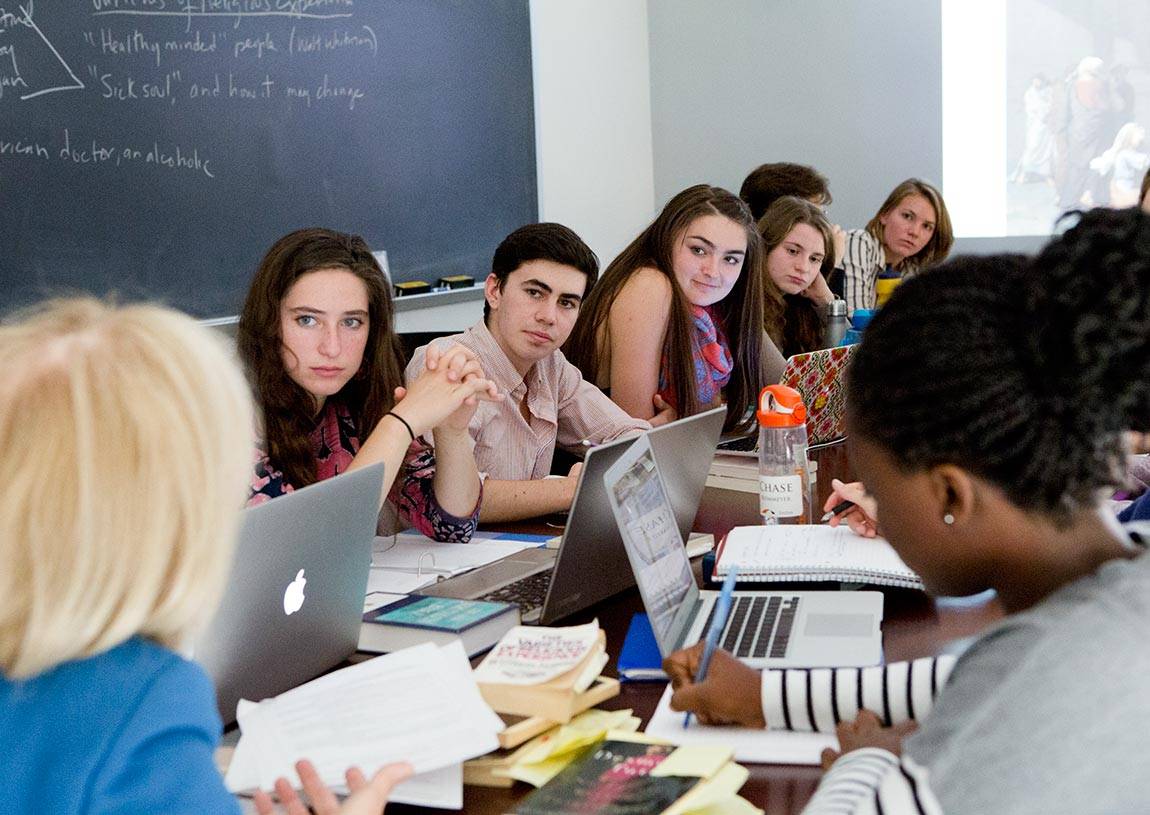 The small size of freshman seminars — this one with 14 students — creates an intimate learning environment with Princeton faculty during the undergraduates' first year on campus.

Viewing Jesus through a contemporary lens

Pagels said the seminar rests on a critical question on her mind: "Why is religion still around in the 21st century?"

After a break halfway through the three-hour class, the group considered contemporary interpretations of miracles including William James' 1902 book "The Varieties of Religious Experience: A Study in Human Nature," which served as the inspiration for the 12-step program; a 1958 video of the televangelist Oral Roberts laying his hands on a woman's head to cure her poor vision and stuttering; and "Lit," Mary Karr's 2009 memoir of alcoholism, conversion to Catholicism and becoming sober.

For freshman Leora Huebner, a highlight of the discussion on miracles was exploring such a wide range of sources. "I enjoyed how we tied the ideas from the New Testament and early Christian sources to contemporary writings," she said. "The Biblical portrayal of miracles seems quite archaic to many of us, but once you put it in the context of our life in the 21st century, it all of a sudden becomes a much more approachable topic."

Her favorite part of the class is the lively discussion. "Everyone comes from a different religious background and has had very different life experiences, so each person has something fascinating to contribute," Huebner said.

"Growing up Catholic, I had only been exposed to the 'perfect Jesus,'" Emmanuella Kyei Manu said. "I wanted the experience of truly getting to know this man who had been so influential in shaping my beliefs and attitude to life in a setting that was balanced."

Nicholas Catenacci chose to look at Christianity in a new way. "Having been brought up in a household of conflicting sects — Catholicism versus Protestantism — I was interested to pursue a more unbiased study of Christianity's central figure."

Michael Rahimzadeh said the seminar has prepared him for his future studies. "It has helped me greatly in the realm of careful reading and analysis," he said. "It will surely make me a better reader, writer and student of history throughout my academic career."

At the end of class, students are encouraged to share interpretations of Jesus and his message — in art, poetry, music, film or writing. On this afternoon, Maya Aronoff showed a video of the American dance company Alvin Ailey's signature work "Revelations," set to a score of gospel spirituals. "'Revelations' is one of the most amazing pieces of art I've ever had the fortune to see," she said. "I love gospel music, and I thought this was a great example of a powerful reinventing of a spiritual narrative."

Aronoff said she chose the seminar both because she is fascinated by religion and because of the chance to take a class with Pagels. "I knew I couldn't miss the opportunity to study with her. In every class, something blows your mind."